Urban Entomology: Its value and impact in Louisiana 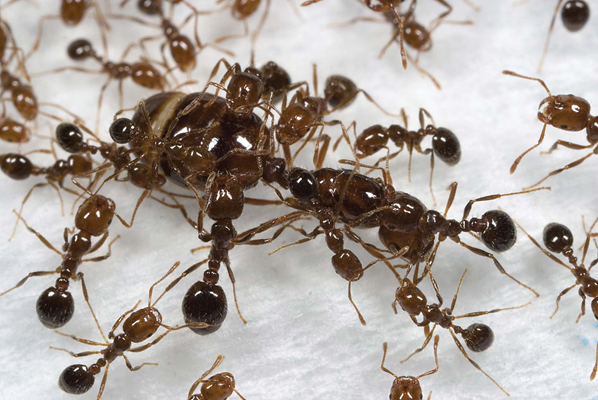 A fire ant queen is protected and groomed by her workers. (Photo by Michael A. Seymour) 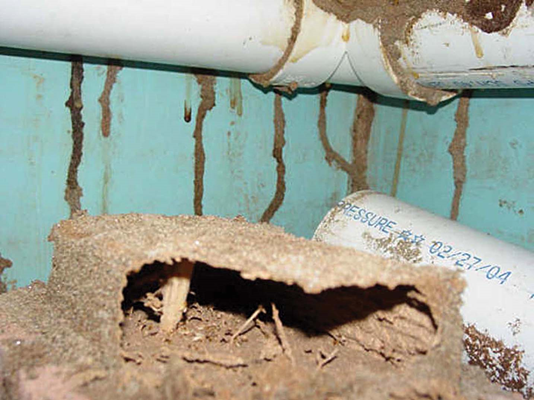 These are Formosan subterranean shelter tubes inside a fiberglass cage in a lab. The hollowed-out object is a two-by-four eaten by termites. The LSU AgCenter was the first to bring baits into citywide field studies in the United States. (Photo by Matt D. Voitier) 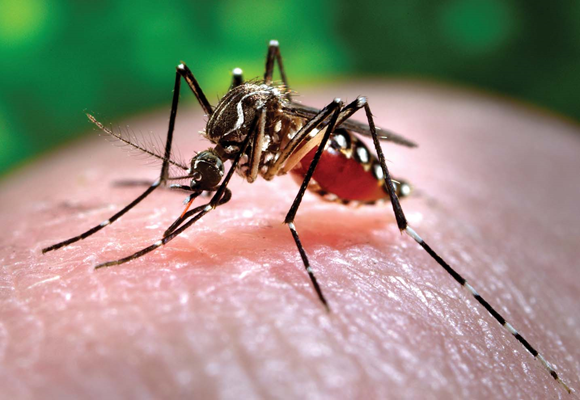 A female Aedes aegypti mosquito in the process of acquiring a blood meal from her human host. This mosquito is responsible for the transmission of dengue fever. (Photo by James Gathany, Centers for Disease Control) 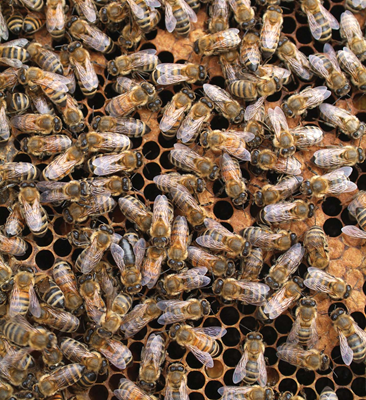 Honey bees are valued at $400 million plus in Louisiana alone for the services they perform pollinating crops, nuts, berries, flowers and fruits. (Photo by John Wozniak)

Entomology is one of the LSU AgCenter’s most significant areas of research and outreach. Insect pests can cause devastation to crops and livestock. And beneficial insects can ward off a variety of pests, helping to make farming more profitable.

Insects can wreak havoc at home, too, in the house and in the garden – and even as we travel. If you come back from a trip with your car covered in smashed love bugs, you know what I mean.

Insects not only can be a nuisance – like swarming love bugs – but lifethreatening. For example, 24 people died of West Nile virus in 2002, a year in which the mosquitoes that spread that disease were particularly numerous in Louisiana.

But insects are life-giving as well. Fruits and vegetables would disappear were it not for bees and other bugs that spread pollen. They also disseminate pollen to the flowers that add visual pleasure to our landscapes.

As the famous entomologist from Harvard University, Edward O. Wilson, has said: “If all mankind were to disappear, the world would regenerate back to the rich state of equilibrium that existed ten thousand years ago. If insects were to vanish, the environment would collapse into chaos.”

This issue of Louisiana Agriculture is about the LSU AgCenter’s entomology program aimed at the home. The purpose of this program is to help us learn to control, manage and live with these fellow Earth creatures.

Fighting fire ants
The red imported fire ant – or fire ant, for short – is a major pest around the world. Not native to Louisiana and introduced here without any of its natural predators, this invasive species nests in the yard and garden around structures and along pavement. Once thought to only nest in open, exposed areas, scientists now know these ants can be found in logs and under bark in forested areas and in wall voids in urban areas.

This species forages for insects, including termites, and can be found in the home foraging for sweets and protein materials.

A goal of the AgCenter’s research program is to study the fire ant’s enemies. For example, one natural predator is the phorid fly also from South America, which AgCenter scientists have introduced successfully in five areas of Louisiana so far. This fly decapitates the fire ant, and just the sound of its wings causes fire ants to disperse. AgCenter scientists also are investigating another biological control that involves a microbial parasite.

Areawide control
AgCenter scientists have established a communitywide or areawide system of control, which has worked successfully in pastures – where fire ants can hurt livestock production – and in urban areas including neighborhoods and parks.

The system involves blanketing an area with a bait, which fire ants will forage for. The worker ants take this bait back to the colony and to the queen. Once the queen is fed the growth regulator, she becomes sterile. As the adult population of ants in the colony dies, no new larvae or adult ants replace them, and the colony gradually dies off, said Dale Pollet, extension entomologist.

“If everybody in the neighborhood spreads the bait, then you can get rid of the ants,” Pollet said. “If an individual does it and his neighbors don’t, then the fire ants will move back in.”

So far, 21 LSU AgCenter extension parish offices have spreaders available for loan for the areawide system of fire ant control. For more information about the areawide control system, contact Pollet at (225) 578- 2370 or dpollet@agcenter.lsu.edu.

The AgCenter’s most high-profile termite control program is in the area of New Orleans known as the French Quarter. There, a federally funded program aimed at reducing Formosan subterranean termite numbers has been in process since 1998. Featuring various treatments to combat the termites, the program is a partnership among the LSU AgCenter, the U.S. Department of Agriculture’s Agricultural Research Service, the New Orleans Mosquito and Termite Control Board, the Audubon Nature Institute and area pest control applicators.

Results have been dramatic. Numbers of alates – the winged termites that swarm in the spring to establish new colonies – have been monitored since the beginning of the project. Within areas having the longest history of treatment, the number of alates caught declined by 48 percent from levels measured when the program began. In addition, sampling of 600 in-ground monitoring stations installed throughout the French Quarter has shown the activity of termites has remained reduced compared to the level of activity in 1998 and outside the treated area.

An effective urban termite control program involves eliminating these wood-eating pests from trees. Termites in trees in the French Quarter program have been substantially reduced. Infested trees have been treated with baits or liquid termiticides and re-inspected. Only one of these trees was found to be infested in 2007, and it has been retreated. Inspections of trees are continuing in the remaining blocks in the program, according to Dennis Ring, extension entomologist.

Molecular genetics
LSU AgCenter researchers use molecular genetic techniques to help in the development of effective termite control programs. These advanced techniques involve analyzing the DNA of termites before and after treating an area, such as the New Orleans French Quarter, to get a better picture of termite biology including breeding systems, colony affiliation, movement of foraging sites and swarming behavior. Read more about this on pages 16 and 17.

In addition to using molecular methods to describe important aspects of termite biology, AgCenter scientists are developing an alternative to conventional chemical and bait treatments for termite control. The system involves using genetically engineered microbes as “Trojan horses” to produce and spread toxins in termite colonies. The scientists have constructed killer strains of yeast to produce toxins that specifically destroy the gut flora that termite workers need to digest wood. Termites will starve without gut flora. The feeding and grooming habits of these termites spread these toxins naturally throughout the termite colony.

Mosquito threat
Mosquitoes continue to be a threat because they carry diseases that can sicken and kill animals, livestock and humans. More than 60 different species of mosquitoes call Louisiana home. The LSU AgCenter has an active program to help communities develop effective abatement programs. For example, in more urban areas with higher populations of container-breeding mosquitoes, such as the Asian tiger mosquito, officials must invest more time and resources in sanitation and public education programs. In more rural areas, they need to target natural mosquito habitats such as rice fields and poorly drained areas.

AgCenter researchers continue to learn more about the mosquito – its biology, its habits – to help develop more effective control measures. Scientists are studying the oviposition, or egg-laying, behavior of Louisiana mosquitoes. Since a blood meal is required for a female mosquito to lay eggs, being able to attract large numbers of egg-laying mosquitoes allows researchers to sample and test the local mosquito population. All collected mosquitoes are identified and then tested for the presence of West Nile virus, St. Louis encephalitis virus and eastern equine encephalitis virus. Read more on pages 26 and 27.

Educational programs
The AgCenter’s outreach effort includes many programs that help people learn to live with the insects that inevitably move into their homes and gardens. Some of these are widely visible such as the media coverage that features AgCenter agents and entomologists. When something unusual happens in the bug world, the media call the local parish extension office or one of the entomologists on the LSU campus – principally Pollet. When termites swarm or yellow jackets get aggressive or there’s an infestation of stinging caterpillars, AgCenter people are in the news.

Each of these extension offices is also a wealth of information about entomology in its publication inventory. There’s a fact sheet on just about every bug that plagues Louisiana – fleas, forest tent caterpillars, Argentine ants, mole crickets, termites and fire ants. You can also sign up for newsletters with urban entomology information, including “Bugs, Bugs, Bugs” by Pollet. These publications help you identify the offending pest with advice one what to do.

This same information is on the AgCenter’s Web site – www.lsuagcenter.com. Type in the insect you want more information about in the search box. You can also read the newsletters online, including “Bugs, Bugs, Bugs.”

If you still can’t find what you’re looking for, you can call your local extension office, and someone there will get you in contact with an expert.

In addition to the media, publications and the Web site, AgCenter experts give presentations to organized groups and at schools, fairs and other special events.

Pesticide applicator schools
Anybody in Louisiana who wants to apply pesticides for a fee must attend pesticide applicator school. They must be certified, says Mary Grodner, LSU AgCenter entomologist who has been teaching the schools since 1980. The Louisiana Department of Agriculture and Forestry does the certifying, regulating and enforcing. But the AgCenter does the education.

Grodner teaches 13 to 15 of these schools for professional applicators per year. Attendance varies from 30 or so for first-time applicators to more than 600. The classes she does for agriculture pesticide applicators usually include about 100 people. They are “static,” she says. The growth is in classes for applicators who do right-of-way, industrial and aquatic.

Other classes that have been growing in numbers include ornamental, turf and landscape maintenance people.

“The classes get bigger as this segment of our economy keeps growing,” Grodner said.

She also does three classes per year for those involved in mosquito control. Class size is growing in this area, too, she says.

Even though she is nearing the end of three decades of teaching these schools year-round, her mantra has remained the same.

Homes, lawns, trees, gardens
Insects in the wrong place at the wrong time can ruin our homes, lawns, trees in our yards and our gardens. Many beetle and moth pests can infest our foods and destroy them. Pests such as dermestids, silverfish, firebrats and moths can damage our clothes and household furnishings. Mites from nesting birds and small animals, ticks and bed bugs can find their way into our homes. Yellow jackets, honey bees, bumble bees, carpenter bees and many other wasps and bees can nest in and  around dwellings and cause problems. The identification and management of these insects through the urban research  and extension programs helps to make life easier for the public.