Taking the Bite Out of Mosquitoes 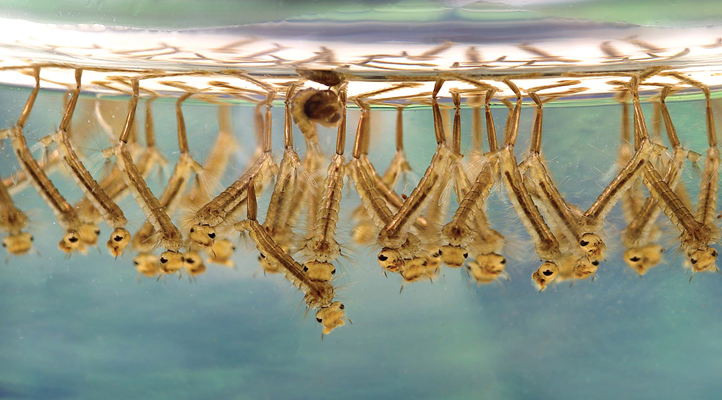 Culex larvae found collecting in standing water in a residential area. Mosquito larvae of most species have a prominent breathing siphon. The larvae rest suspended diagonally from the water surface with the end of the siphon tube penetrating its surface enabling the larvae to access their air supply. (Photo by James Gathany, Centers for Disease Control) 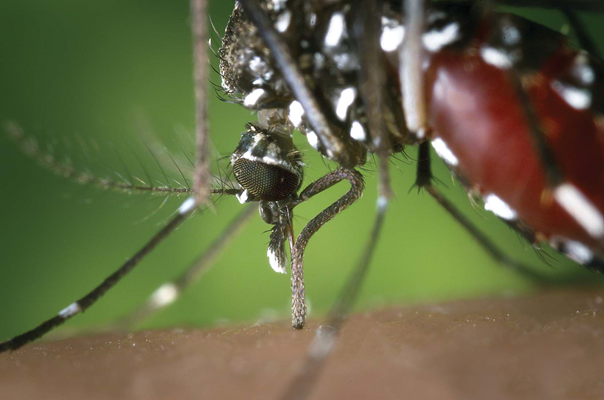 Mosquitoes in Louisiana may interfere with enjoyment of the outdoors almost any time of year. Yet, if you understand how mosquitoes live and multiply, you have a better chance of controlling their larval development sites and reducing their numbers. More than 60 species of mosquitoes are known to occur in Louisiana, and they have different habitat preferences, activity patterns and distributions.

Development sites, life stages
All mosquitoes require water for larval development. A vertebrate blood meal is required in most mosquito species before laying a batch of eggs. In general, mosquitoes can be divided into two groups. The difference depends whether they lay nondormant or dormant eggs.

Mosquitoes that lay nondormant eggs include most species associated with permanent to semi-permanent aquatic sites. These females usually lay their eggs, which can float, directly on the water surface. These eggs develop and hatch in three to five days depending on temperature. These species often lay several batches a year, one generation succeeding another in a single season. Female adults survive the winter by finding shelter in protected sites, such as indoors, and going into a hibernation stage.

Mosquitoes that lay dormant eggs are associated with floodwater or temporarily wet sites. In late summer or early fall, the females deposit their eggs in moist sites or areas that have been previously flooded. While the eggs undergo some development, they do not hatch immediately. Instead, they enter a dormant period over the winter and hatch during wet periods the next spring. These eggs are resistant to drying and cold temperatures and may remain viable for years. Mosquitoes laying eggs under these circumstances typically produce only a few generations per year.

Several factors influence the female’s choice of an egg laying site, no matter whether she lays dormant or nondormant eggs. These factors include amount of organic matter in the water, the nature and amount of dissolved salts, and the kinds and numbers of microorganisms. In general, however, any collection of water that persists for one week or more is a potential development site for mosquitoes.

To minimize mosquito development in areas with permanent ponds and small lakes, it is best to add depth of 3 to 4 feet and eliminate emergent vegetation. When constructing new ponds and lakes, keep the sides steep and nearly vertical. Aquatic sites with these characteristics don’t offer the shallow, sheltered sites that can support emergent plants and the shelter they offer developing mosquito larvae. Large, open water areas with sufficient wave action also inhibit mosquito development.

Once the female mosquito has found a favorable aquatic development site, she lays her eggs either on water, at the edge of water or on a previously flooded soil surface. The larvae that later emerge are strictly aquatic. They can’t exist out of water.

In most species, the larval stage lasts seven to 10 days, depending on the temperature. Temperatures 85 degrees and above cause more rapid development. The larvae then molt and enter the nonfeeding pupal stage, which usually lasts two to three days.

Finally, the insect moves to the adult stage. The lifespan of an adult can vary widely. For instance, some species can hibernate through winter. Usually, however, the ordinary life span of an adult in midsummer lasts two to four weeks.

Source reduction
Reducing or eliminating mosquito development sites, referred to as source reduction, is the most effective way to reduce mosquito populations. After all, doing so permanently reduces or removes the source of future mosquito production.

Large source reduction projects may be beyond the capability of a property owner. Even small projects, however, such as clearing local drainage systems with inexpensive hand equipment, can be an important preventive measure for combating mosquitoes. Any time, effort and money spent on source reduction, such as filling or improving drainage ditches, can pay dividends many times over in reduced mosquito populations in succeeding years.

Many mosquito problems are created unknowingly by property owners who allow water objects such as old tires, buckets, houseplant saucers, bird baths and other containers, to contribute to local mosquito populations.

Biological controls
A system of biological control introduces or encourages natural enemies of the pests you want to control. For the biological control of mosquitoes, we are experimenting with predators (such as mosquito fish and flatworms), parasites (nematode worms) and pathogens (viruses, fungi and bacteria).

Another effective biological agent is the bacteria Bti (Bacillus thuriengiensis israelensis). In the past few years, it has become widely used as a mosquito larvicide. It is safe and widely sold in retail outlets under the name Mosquito Dunks. It was commercially developed from naturally occurring bacteria that produce a toxin specific to mosquitoes and certain other flies. The toxin in Bti attacks the gut wall of mosquito larvae so larvae must ingest particles of the insecticide. Formulations of Bti are primarily extracts of bacteria cultures rather than living bacteria. Bti is not suitable for every site and species of mosquito. For example, Bti is less effective in polluted water against most permanent-water mosquitoes.

Bti does have the advantage of being specific in its mortality against mosquitoes. It does not harm fish and nontarget invertebrates. Additionally, alternate wetting and drying will not reduce its effectiveness and it will keep working for about 30 days under typical environmental conditions.

Current research
Current mosquito research at the LSU AgCenter is focused on various aspects of the biology and control of mosquitoes and the involvement of Louisiana mosquitoes with the transmission of disease agents to humans and animals.

AgCenter researchers are studying the oviposition (egg laying) behavior of Louisiana mosquitoes and are trying to identify additional chemical attractants. Currently, a fish oil emulsion is used in mosquito gravid traps to attract egg laying mosquitoes. These traps are an important part of the West Nile virus (WNV) surveillance program, which monitors the presence of the virus in mosquitoes collected every year at research sites in East Baton Rouge Parish.

Since a blood meal is required for a female mosquito to lay eggs, being able to attract large numbers of egg-laying Culex mosquitoes allows researchers to sample and test the local mosquito population. All collected mosquitoes are identified and then tested for the presence of WNV, St. Louis encephalitis virus and Eastern equine encephalitis virus at the Louisiana Veterinary Diagnostic Laboratory at the LSU School of Veterinary Medicine. Collected ovipositing female mosquitoes have had an opportunity to acquire WNV in a blood meal from a wild bird, which may harbor the virus. Most wild birds that serve as reservoirs of the virus in nature are not negatively affected by WNV.

Additionally, AgCenter researchers are using surveillance data to correlate population levels of vector mosquitoes and WNV infection rates in mosquitoes with the numbers of human cases of WNV recorded in East Baton Rouge Parish. West Nile first appeared in Louisiana in 2001. Since that year, more than 915 human cases of West Nile virus have been recorded in the state resulting in at least 60 human deaths. This virus circulates in nature primarily in a wild bird-mosquito cycle. The virus amplifies in the spring and early summer and then is vectored to humans and horses during summer and early fall by Culex mosquitoes, primary C. quinquefasciatus, the southern house mosquito. Based on studies recently conducted in East Baton Rouge parish, C. quinquefasciatus mosquitoes, which live in close association with people, have been shown to feed both on birds and mammals, including people and horses.