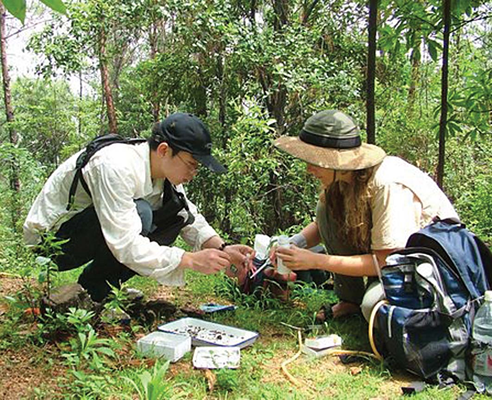 Claudia Husseneder, right, and Mr. Pan, a student from Zhejiang University who served as her guide and translator, collect termites from pine wood stumps in China. (Photo by Edward Vargo)

Collecting and studying Formosan subterranean termites from their native China may help entomologists find new ways of combating these invasive pests in the United States.

Claudia Husseneder of the LSU AgCenter and Ed Vargo, an entomologist at North Carolina State University, went to China in May 2007 to learn about Formosan subterranean termites in their native habitat.

“Most termites are not invasive. That is, they don’t move far and establish themselves in new places,” Husseneder said.

But that’s not true of the Formosan variety, she said. They can be found all around the Pacific Rim and in the southeastern United States.

One difference between the two geographic areas, Husseneder said, is that Formosan subterranean termites display more aggression in their Chinese “homeland.”

“We tested colonies against each other, and some of them fight to the death,” Husseneder said.

“Aggression between colonies is fairly low in Louisiana and other places where the termite has been introduced,” she added. “In their new territory, they hardly fight and are more cooperative. This may be a clue to why they are such successful invaders.”

Husseneder said the termites that found their way to the United States lost some of their genetic diversity, which may explain why they are less aggressive.

“The objective of the China trip is to use genetic markers and aggression tests to compare the levels of genetic diversity, colony breeding structure and aggression between colonies with those of introduced populations,” Husseneder said.

They found termite colonies in live trees along city streets as well as in private homes, schools and temples. Husseneder said they even collected termites from the surgical ward of the Affiliated Hospital of Nanhua University in Hengyang.

“In natural habitats, colonies were frequently discovered in old pine stumps along logging paths,” she said.

With funding from National Geographic, she and Vargo were able to fund last spring’s trip. And they have enough funds from the grant to pay for at least two more trips, she said. She and Vargo are planning to visit Hong Kong, Macau, Hainan and the southern and western provinces of the People’s Republic of China.

“The work will provide valuable new information on the major features of the breeding system of native Formosan subterranean termite populations and how these features vary over geographic regions in the native and introduced range,” she said. “We finally may figure out what makes this termite such an exceptionally successful invader.”