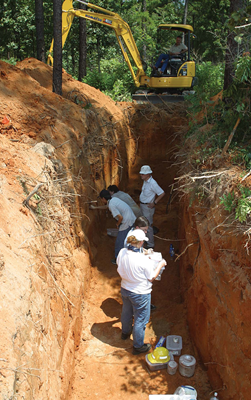 This is a view of the excavation in Kisatchie District of Kisatchie National Forest, southwest of Natchitoches, La. (Photo by Michael A. Seymour) 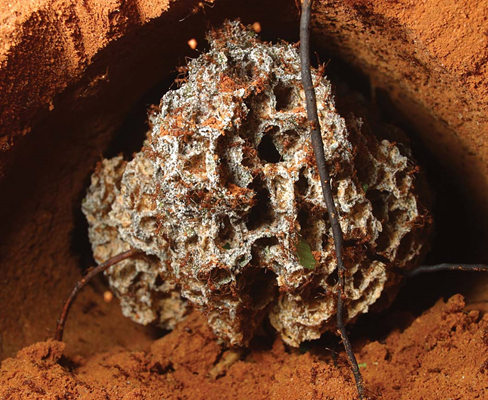 A fungus garden with roots that provide structure. (Photo by Michael A. Seymour) 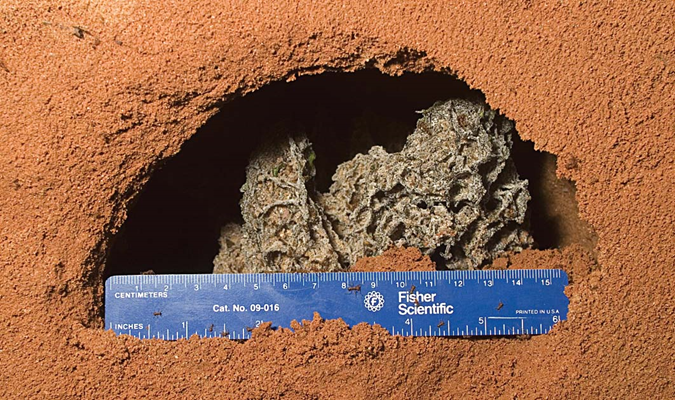 Note that this fungus garden is about 6 inches in diameter. (Photo by Michael A. Seymour) 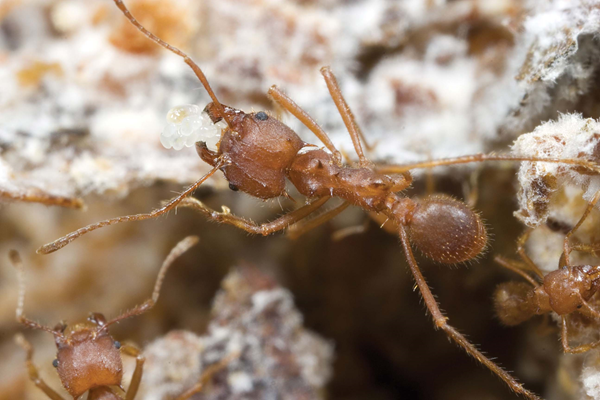 Leaf-cutting ants often excavate soil near roads. In two recent incidents in Kisatchie National Forest and on private property near Rosepine, La., the ants excavated enough soil to cause sinkholes that swallowed vehicles. This leaf-cutting ant worker is carrying eggs and larvae. (Photo by Michael A. Seymour)

In western Louisiana from Lake Charles all the way north of Lucky in Bienville Parish, a common site near roads and open areas are “towns” of small crater-shaped soil piles with large red ants busily moving particles of soil. These clusters of craters are nests of Texas leaf-cutting ants, which give them their nickname “town ants.” Sometimes these ants are called “parasol ants” because the pieces of leaves they carry look like little umbrellas (parasols). These ants are native to Louisiana but used to be more widespread.

Though fascinating to watch, this activity can cause extensive damage, especially when the ants cut the leaves of prize lilies, roses, citrus trees and other plants, rendering them unsightly. The ants use the cut leaves as a soil on which they plant a special fungus, which provides food for the hundreds of thousands of ants in mature colonies. Leaf-cutting ants often excavate soil near roads. In two recent incidences in Kisatchie National Forest and on private property near Rosepine, La., the ants excavated enough soil to cause sinkholes that swallowed vehicles.

Damage caused by these leaf-cutting ants make them not only a nuisance to landowners and the forestry industry but also costly. The forestry industry in particular loses money when these ants strip new pine saplings of their needles, which can happen in a single night by a leaf-cutter colony. These saplings almost never recover and, if they do, their growth is stunted both vertically and horizontally. This creates patchiness and trees of different sizes in carefully planted pine plantations. There are no effective methods to suppress these ants.

In the past three years, LSU AgCenter scientists have excavated six nests of town ants and found extensive excavation of the soil by the ants. The ants remove the soil from tunnels and larger areas called galleries and place the excavated soil on the surface. The ants even dig a hole in which the members of the colony spend the winter called a central chamber. The discovered chamber was at least the size of a 50-gallon drum.

Members of a leaf-cutter ant colony include reproductives, workers and brood. Brood is another name for eggs, larvae and pupae of ants. The winged reproductives will go on a mating flight on a moonless night in April, May or early June. Females will mate with a male, who will quickly die. The female will lose her wings and then build a new nest in deep, well-drained sandy soil. Once inside her nest, she lays eggs. She nourishes the developing larvae with nutrients obtained by regurgitating her digested wing muscles. These larvae eventually become pupae that mature into workers, who dig the nest to enlarge it, cultivate the fungus garden, feed the developing larvae and clean the queen and the nest. The queen carries the “stock” for the fungus garden in a special pouch in her mouth when she leaves her maternal nest on her mating flight. She plants this garden when she digs her new nest. When the new workers emerge, they will tend this fungus garden.

The workers provide leaves on which the fungus grows. Leaves are cut by workers and brought back to the nest. Workers lick the leaves to remove the waxes and clip them into pieces about the size of the letter “a” on this page and plant them at 90-degree angles to each other in the fungus garden. The workers also labor to remove any “weeds” or varieties of fungus that do not belong in the garden. When the fungus “fruits,” workers will pick the fungus and feed it to members of the colony. Because of these specific habits, leaf-cutting ants do not respond well to most baits.

So next time you happen upon a “town” of ants, look at the vegetation (or the lack thereof) around the nest. Leaves of trees will be missing or look like they have bites taken out of them. Much of the grass and surrounding forbs and shrubs will be trimmed. What you can’t see is an entire city beneath the soil. Research on leaf-cutting ants and the effect of their activities on soils, particularly soil nutrients continues.