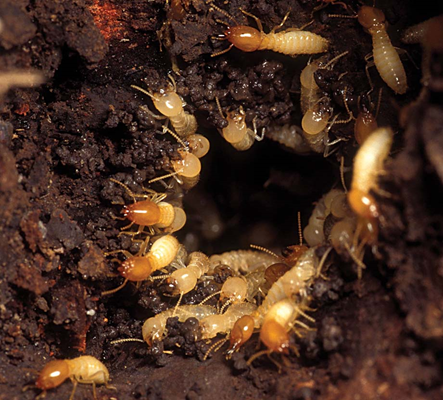 A federally funded Formosan subterranean termite pilot test in New Orleans’ French Quarter, known as the French Quarter Program, began in 1998. Featuring various treatments to combat the termites, the program is a partnership among the LSU AgCenter, the U.S. Department of Agriculture’s Agricultural Research Service, the New Orleans Mosquito and Termite Control Board, the Audubon Nature Institute and area pest control applicators.

Structures enrolled in the program are inspected visually, with infrared cameras and microwave devices. When termites are detected, the buildings are treated by installing aboveground bait stations or are spot-treated with liquid insecticides. In the initial area, inspections in 2003 found 22 percent of the structures were infested with Formosan subterranean termites, but re-inspections in 2005 found only 6 percent of the structures infested. These results strongly indicate that the program is decreasing the number of Formosan subterranean termites.

Numbers of alates – the winged termites that swarm in the spring to establish new colonies – have been monitored since the beginning of the project. Traps were used at selected locations for the first two years. Since then, they have been installed at all street corners with available lights. Within areas having the longest history of treatment, the number of alates caught declined by 48 percent from levels measured when the program began. In addition, sampling of 600 in-ground monitoring stations installed throughout the French Quarter has shown the activity of termites has remained reduced compared to the level of activity in 1998.

The levee along the Mississippi River is an open area without structures and contains trees, planter boxes and railroad tracks. More than 35 percent of the in-ground stations in that area had active termites during 2003. A rigorous bait program to control these termites was initiated in 2005. As a result, termite activity during 2006 in the in-ground stations on the levee was reduced 95 percent, and the number of alates caught on traps on the levee decreased about 65 percent from 2003 to 2006.

More than 1,000 properties with structures and 1,870 trees on these properties have been inspected for the presence of termites. Less than 2 percent of the properties with trees and about 2 percent of the trees were infested with Formosan subterranean termites. This percentage of infested trees is lower than the percentage of infested trees found in many areas outside of the French Quarter. Infested trees have been treated with baits or liquid termiticides and re-inspected. Only one of these trees was found to be infested in 2007, and it has been retreated. Inspections of trees are continuing in the remaining blocks in the program.

Structures in the additional area included in the program in 2006 and 2007 are being inspected for termites before treatment to determine effectiveness of treatments.