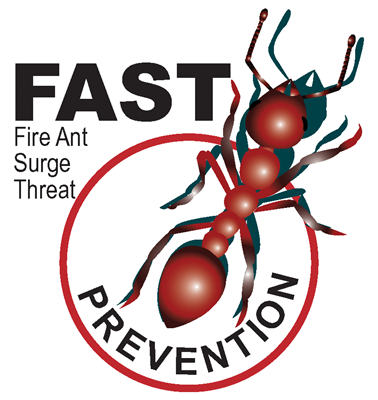 In May 2006, the LSU AgCenter launched the Fire Ant Surge Threat Prevention (FAST) program to encourage fire ant suppression and allow the native or good ants to reestablish. 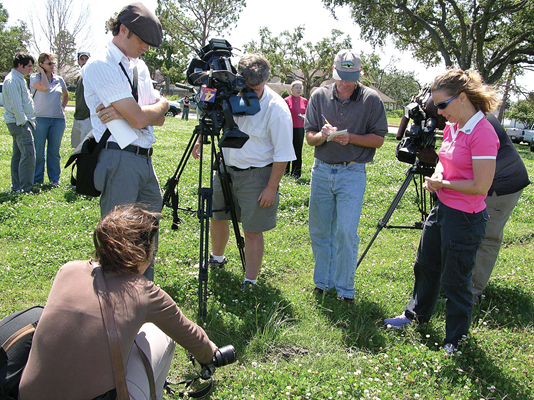 The LSU AgCenter held a press conference the day the FAST Prevention program was initiated in New Orleans, which was May 1, 2006. Linda Hooper-Bùi, LSU AgCenter entomologist, at far right, explained to reporters how to control fire ant spread.(Photo by Johnny Morgan) 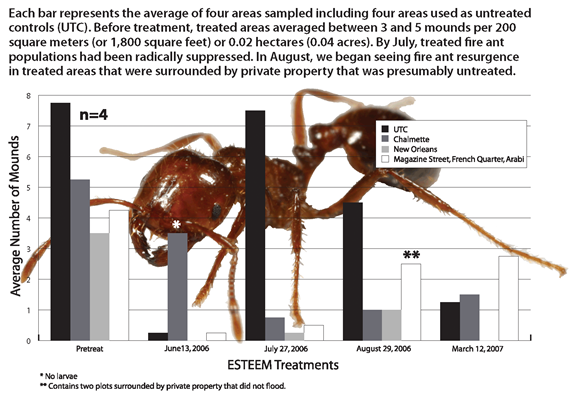 Each bar represents the average of four areas sampled including four areas used as untreated controls (UTC). Before treatment, treated areas averaged between 3 and 5 mounds per 200 square meters (or 1,800 square feet) or 0.02 hectares (0.04 acres). By July, treated fire ant populations had been radically suppressed. In August, we began seeing fire ant resurgence in treated areas that were surrounded by private property that was presumably untreated.

Linda M. Hooper-Bùi, Beverly A. Wiltz, Michael A. Seymour and Lee A. Womack

On Aug. 29, 2005, when Hurricane Katrina hit the Gulf Coast, floodwaters from storm surge and breached levees inundated New Orleans and surrounding areas with salt water. The red imported fire ant, a flood-adapted species originally from the Paraguay River flood plain in South America, was suppressed and in some cases eradicated. Many native ant species also were eradicated or their populations suppressed.

This absence of ants posed a situation in which the fire ant, which is much more aggressive in recolonizing, could become “the only ant in town.” Additionally, areas with little or no flooding were a source of large populations of fire ants that could easily recolonize once-flooded neighborhoods.

In May 2006, the LSU AgCenter launched the Fire Ant Surge Threat Prevention (FAST) program to encourage fire ant suppression and allow the native or good ants to reestablish. Fortunately, the fire ants’ mating season (usually in late May or June) was delayed because of lack of food and drought in the affected area. This allowed time to apply an insect growth regulator bait for foragers to bring into the colonies before mating flights began.

The goals of the program were (1) spread bait over public green space in May and June, (2) educate people in nonflooded communities about communitywide fire ant management and (3) educate “pioneers” or individual residents who were able to move into previously flooded areas about fire ant prevention. The last objective is extremely difficult because people have been slow to repopulate and those who do are often isolated.

Several companies donated ant control products, and several partnerships were developed. Valent USA donated 5,000 pounds of ESTEEM (active ingredient 0.5% pyriproxifen) Fire Ant Bait, an insect growth regulator. LSU AgCenter scientists worked with the Louisiana Department of Agriculture and Forestry (LDAF) to obtain the proper permits to apply this bait to public areas in Orleans and St. Bernard parishes. Although this bait has a broad label that includes more than 200 fruits and vegetables, urban use had not been added to the label at the time. The active ingredient in ESTEEM works to interrupt reproduction in ant colonies. The queen stops laying eggs, and the larvae stop developing and never turn into workers or reproductives. Any reproductives in the colony that receive a dose of the active ingredient, even if they go on a mating flight, would be rendered sterile and unable to reproduce. Workers and queens, however, are not directly killed by this product.

Garden Tech donated 2,500 pounds of Over N’ Out Fire Ant Granules (active ingredient 0.01% fipronil) for use by individual residents in flooded neighborhoods. These residents were also given a brochure with information on how to choose plants and other landscaping materials to keep their property fire ant free. Over N’ Out is a contact insecticide that affects ants that move soil and is ideal for prevention of fire ant infestation. When Over N’ Out is applied, native ants such as carpenter ants, acrobat ants and other ants are not affected because they do not extensively excavate the soil.

Ambrands donated three semis of Amdro for use in community- wide fire ant management and by individual residents. The New Orleans Mosquito and Termite Control Board (NOMTCB) – the LSU AgCenter’s main partner in the project – received matching dollars from the federal government equal to the value of the donated goods. The New Orleans board partnered with the LSU AgCenter to conduct education campaigns and distribute bait in flooded and nonflooded neighborhoods. For example, AgCenter personnel distributed 2,500 pounds of ESTEEM using ATVs equipped with broadcast bait spreaders to treat 2,500 acres of infested public land in Orleans and St. Bernard parishes. A pickup truck with a bait blower was used to apply bait to levees.

The results of this project will not be known for many years. LSU AgCenter personnel are monitoring the populations of invasive and native ants. Figure 1 shows the ant populations before LSU AgCenter personnel treated the public areas and after. The sampling in 2007 has been conducted when there was little rain or when it was very hot so very few mounds visible. However, it appears that the fire ants are reestablishing in most areas of the city.

LSU AgCenter personnel continue to work with the New Orleans board to monitor the ants and distribute bait. The NOMTCB is still treating abandoned properties where they find fire ants in their daily efforts to suppress mosquitoes, flies and rodents. LSU AgCenter personnel are monitoring the invasive and native ant populations and providing education to communities on community-wide fire ant management.