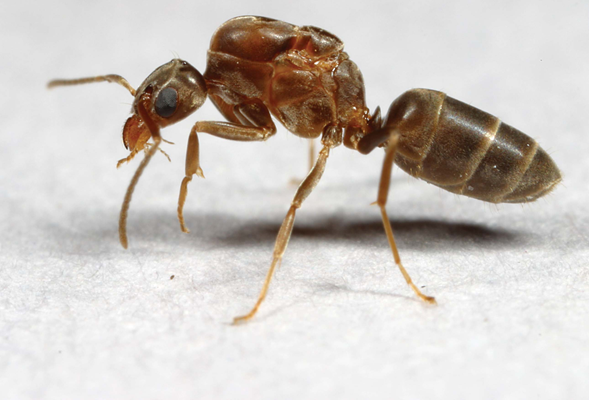 Argentine ants form mega-colonies with millions of workers and hundreds of queens that can extend for miles. Argentine ants forage in trees to “tend” plant-feeding insects such as aphids and scales. These means they protect them from natural enemies and actually herd them similarly to farmers herding cows. The ants eat the honeydew excreted by these insects. The ants also forage on the ground for food items. They make their nests under rocks, fallen branches, mulch and at the base of trees.

Argentine ant populations can reach huge numbers. One of many areas under siege is Toledo Bend Reservoir in northwest Louisiana. In some areas, homes and cabins have several trails or lines of ants 2-3 inches wide. Once inside, these ants infest kitchens, bathrooms and other areas of the house. Tourists to the area have been horrified to find Argentine ants infesting their boats, cars, RVs and even tents within minutes after arrival. Sometimes, tourists take these unwanted guests home with them.

Resort owners and homeowners are using massive amounts of insecticides to combat the Argentine ants. Some fishing camp and resort owners have reported that they no longer allow tent camping because Argentine ants will crawl into people’s tents and join them in their sleeping bags. They also report using contact insecticides, often daily, to keep the ants out. This overuse of pesticides may suppress populations of beneficial insects or may runoff into the reservoir during rains. Scientists from the LSU AgCenter designed a treatment protocol to suppress the Argentine ants and reduce the amount of pesticides used in areas of infestations.

The Argentine ant is considered a nuisance but does not sting. This ant is extremely difficult to control because it is so nomadic. The only way to manage it is on an area-wide or community-wide basis.

Areawide or communitywide management of fire ants has been successful in Louisiana for the past eight years. LSU AgCenter researchers have modified the techniques they developed for fire ant management and have applied them to the Argentine ant problem. The protocol, however, is more complex than the fire ant program. The Argentine ant protocol must be done with all residents in the area at the same time to be successful. They MUST treat twice. They have to treat again six weeks later. If they don’t, the population will be up and running again in less than two months. They also must eliminate harborage, which is not an issue with fire ants. They also must reduce the number of ants foraging into trees and homes to get them to take the bait. Early April (1-15) is the best time because it is important to disrupt populations before they get too large.

Clean up the area and eliminate harborage
Look around the yard for areas harboring Argentine ant colonies. If harborage is eliminated, one can reduce the amount of insecticides used to suppress ant colonies. Harborage can protect the ants from winter freezes and insecticidal treatments. Examples of ant harborage include boat seats, overturned canoes or kayaks, dead stumps, dead or felled trees, children’s toys, free-standing basketball nets, woodpiles and lawn tools. These items also provide extra heat for rapid development of colonies, which can quickly overwhelm the property.

Trim plants and trees so they do not touch structures
Ants can gain entry into structures from tree branches close to the roof. Argentine ants are attracted to moist wood and rotting wood. To prevent infestation, consider replacing rotting siding, window sills and door frames on homes and outbuildings. Look for ground-towood contact around structures and find a way to eliminate this problem. This may also prevent new termite infestations. The next time it rains, walk around the property and look for water that may pool or contact the wood on the structures. Eliminating water-soaked wood will help prevent ant infestation of homes and siding.

Disrupt the foraging into trees and houses
Using a contact insecticide such as a pyrethroid or an organophosphate in a handheld pump or backpack sprayer, apply a liquid barrier around trees approximately two feet up and one foot out from the base of the tree or house on which the ants are trailing. Make sure to treat all surfaces of the bark of the trees and try to treat all the trees on your property at the same time. Drench with pesticides any nests of ants you see. If possible, adjust the pH of the water to 5.5-6.6 for maximum efficacy of sprays and drenches. Toxicology research has shown that the pH of the water affects the efficacy of insecticides. Treating in this manner will disrupt the nesting and foraging and allow the bait treatment to be successful. The drenching of the visible nests will reduce the number of ants that require bait. Be sure to trim your trees so that they do not touch your house or shed.

Let them eat bait
Many of the nests are hard to detect, so baiting lets the foraging ants do the work of gathering the bait and bringing it to the nest. Broadcast granular bait such as Max Force (the active ingredient is hydramethylnon) (1.5 pounds per acre) in the early spring. Corn and soybeanbased bait products such as Amdro, which also has hydramethylnon as the active ingredient, are not readily taken by Argentine ants, even though they are on the label. The ants are attracted to the fish oil and protein in a bait such as Max Force, which acts as a stomach poison in the ants and robs them of energy. The bait must be fresh and applied when the ground is dry, and no rain is expected for 24 hours. Broadcast bait over the entire property. Liquid baits, such as those with boric acid, can also be offered in bait stations. Ants will usually visit these stations when they need sugars or carbohydrates and may come to them intermittently. Be sure to place the bait stations out of direct sunlight. Ants will not enter a hot bait station.

Repeat
To be effective this process must be repeated four to six weeks after the first treatment. The first treatment will kill large numbers of workers and some queens. However, not all the queens are fed all the time, and some of the larvae may survive the initial treatment. Repeating the whole process will help suppress more of the population of these persistent ants.

(This article was published in the fall 2007 issue of Louisiana Agriculture.)