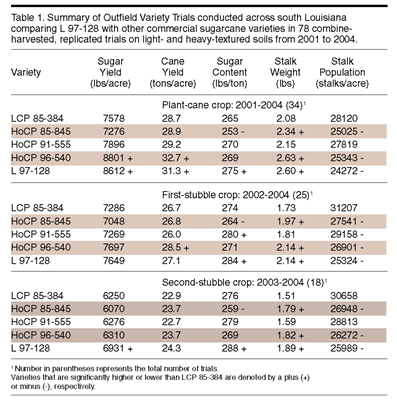 Table 1. Summary of Outfield Variety Trials conducted across south Louisiana comparing L 97-128 with other commercial sugarcane varieties in 78 combine harvested, replicated trials on light- and heavy-textured soils from 2001 to 2004.

Sugarcane continues to be one of the leading row crops contributing to the Louisiana economy. New varieties play an important role in sustaining Louisiana’s sugar industry and are highly anticipated upon release. On May 5, 2004, the variety L 97-128 was released to Louisiana’s sugarcane growers and processors by the LSU AgCenter in cooperation with the U.S. Department of Agriculture’s Agricultural Research Service Sugarcane Research Unit at Houma and the American Sugar Cane League.

Every new variety starts at the photoperiod and crossing house facilities located at the St. Gabriel Research Station. Here, parental clones are grown in preparation for crossing. The female parent of L 97-128 is LCP 81-10, and the male parent is LCP 85-384. The cross between these two parents was made in the fall of 1992, just weeks after Hurricane Andrew.

The sugarcane variety development program can be divided into two stages – selection and variety testing. The selection stage culminates when plants considered worthy to continue are assigned a permanent variety designation in year 5 of the program. For L 97-128, the “L” indicates that the cross and selection occurred at the St. Gabriel Research Station. The “97” indicates the year the permanent number was assigned. The “128” is a number used to identify the newly assigned variety, and this number ranges between 1 and 499 for AgCenter sugarcane varieties.

At the same time experimental clones are introduced to the final step of field testing, they are provided to the American Sugar Cane League for “seed” increase. In the case of sugarcane, the “seed” are actually whole plants. Stalks from a plant are cut and planted, and the buds along the stalks germinate and grow to produce new plants. This increase through cutting and planting of stalks, or seedcane, is a process known as vegetative propagation. The American Sugar Cane League provides seed to sugarcane growers. For L 97-128, seed was made available to growers in late summer of 2004.

Monoculture Problem
One of the issues of concern with a monoculture – or growing a single variety in such large proportions – is that certain diseases may adapt to a variety over time. This is the likely case with sugarcane brown rust disease. When LCP 85-384 was first released, it was resistant to brown rust. Beginning in 2000, this disease began to infect LCP 85-384. The disease has become more severe in each successive year, and research has shown that yield losses because of rust disease can be as high as 20 percent.

When sugarcane growers first choose a new variety, yield is of utmost importance (Table 1). L 97-128 is characterized as having high sugar yields, with exceptionally high sugar content early in the growing season. Because sugarcane is a perennial crop (the ability to produce successive crops over multiple years), its yields in subsequent stubble, or ratoon, crops is important as well. With Louisiana’s temperate climate, sugarcane varieties must overwinter, re-grow and produce high yields for three to five years. L 97-128 also produces high yields in stubble crops.

Maximum yield potential can be jeopardized by harmful diseases and insects. L 97-128 is resistant to sugarcane mosaic virus and sorghum mosaic virus. The new variety is moderately susceptible to smut, moderately resistant to brown rust and moderately resistant to leaf scald under natural field infection. The effect of yellow leaf syndrome on the yield of L 97-128 is unknown. Similar to all other varieties grown in Louisiana, L 97-128 may sustain significant yield loss in stubble crops from ratoon stunting disease. To realize the maximum yield potential of this variety, healthy seed cane free of this disease must be planted. L 97-128 is susceptible to the sugarcane borer and should be scouted to ensure timely insecticide applications. The new variety should not be planted where insecticides cannot be applied.

The road for L 97-128 began in 1992 and culminated in its release in 2004. Its impact should help sustain a sugar industry that had its meager beginnings in 1751 in New Orleans when Jesuit priests first planted sugarcane stalks in Louisiana’s fertile alluvial soils. The release of L 97-128 was a team effort and should help sustain Louisiana’s $2 billion dollar sugar industry.