Grasp: A New Herbicide for Managing Weeds in Rice 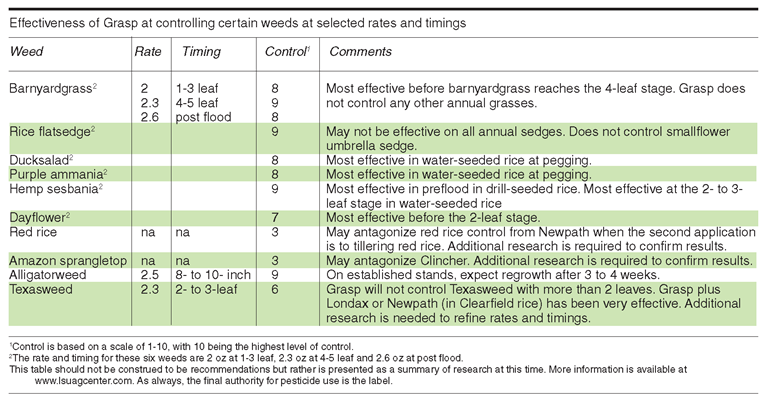 Grasp (penoxsulam) is a triazolopyrimidine sulfonamide herbicide developed by Dow AgroSciences for use in drill- and water-seeded rice. Grasp has excellent foliar activity and some residual control of selected weeds and can be applied at 2.0 to 2.8 ounces per acre from one-leaf rice until 60 days before harvest. The 2005 launch of Grasp by Dow AgroSciences was on limited basis, and label changes are expected for the 2006 season. As always, the LSU AgCenter strongly suggests that a current label be consulted before using any herbicide, including Grasp.

LSU AgCenter weed scientists began working with Grasp in 2003, but it wasn’t until 2004 that in-depth research could be conducted due to limited product availability. The primary goal of this research was to determine what role, if any, Grasp could play in managing weeds in Louisiana rice crops.

In research conducted at the Northeast Research Station, Grasp demonstrated excellent activity on barnyardgrass, hemp sesbania, rice flatsedge, ducksalad, dayflower and purple ammannia in both drill- and water-seeded rice. In off-station tests, Grasp has failed to control smallflower umbrella sedge, indicating that it may not be effective against all annual sedges.

Grasp at 2 ounces per acre plus 1.3 pints per acre of Command applied to one- to three-leaf rice has provided excellent control of barnyardgrass, Amazon sprangletop, hemp sesbania and rice flatsedge. In some studies, additional applications were needed to control sesbania coming up after the application. Grasp plus Command must be applied and activated before sprangletop emerges.

Grasp-plus-Londax combinations also were effective at managing Texasweed in conventional rice in 2005. Grasp alone does not control Texasweed.

Overall, Grasp compares very well to standard herbicides and has the potential to control some important broadleaf weed problems in rice. At this time Grasp appears to be promising in Clearfield rice, drill-seeded rice and water-seeded rice. At the Northeast Research Station, Grasp has consistently controlled barnyardgrass, hemp sesbania, rice flatsedge, ducksalad and purple ammannia. Grasp also has demonstrated excellent activity on alligatorweed, but it has limited translocation, and regrowth is expected. When tank-mixed with Londax and Newpath (in Clearfield rice), Grasp has demonstrated excellent activity on Texasweed.

A number of questions concerning Grasp need further evaluation. First, a better understanding of rice tolerance at rates higher than 2 ounces per acre when applied at the one- to three-leaf stages is needed. Second, the potential of antagonism issues with Clincher (sprangletop) and Newpath (red rice) needs further evaluation. Additional work with Texasweed and alligatorweed is also needed to confirm 2005 results.

(This article was published in the winter 2006 issue of Louisiana Agriculture.)