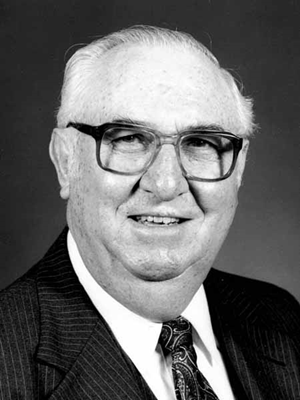 Though Doyle Chambers died Sept. 5, 2005, in Baton Rouge, his contributions to the LSU AgCenter, research and Louisiana agriculture will live forever.

Chambers served as director of the Louisiana Agricultural Experiment Station for 21 years until he retired in 1985. Vice chancellor was added to his title in 1979.

Chambers is most remembered for his role in creating the LSU AgCenter as a separate institution with its own administration within the Louisiana State University System. He saw the need for funding funneled straight into research and extension as critical to the future of agriculture in the state.

His plan proved correct. Though times have continued to be tough and funding always inadequate, the separation actually boosted the visibility and effectiveness of all three branches of the land-grant system – research, extension and teaching.

His most significant contribution to research is the bringing together of a fragmented operation into one unified experiment station.

“This set the stage for modern-day ag research,” said Kenneth Tipton, who was the director from 1989 to 1996 and had worked for Chambers.

The Louisiana Agricultural Experiment Station now includes 20 off-campus stations and 13 academic departments on the LSU campus and is fully integrated with the Louisiana Cooperative Extension Service.

Chambers was among the first experiment station directors to push for more grants and contracts, which ultimately led to the LSU AgCenter’s well-respected and envied intellectual property program, which has been called the “crown jewel” of the LSU System.

“He was a conservative man,” said William H. Brown, vice chancellor emeritus and former director, who also worked for Chambers. “But he was much more visionary than a lot of people gave him credit for."

Immediately upon his retirement in 1985, Chambers established the Doyle Chambers Research Award, which has been given every year since to recognize the lifetime achievement of an LSU AgCenter scientist. The award also includes a stipend, now at $2,000.

Through proceeds of a life insurance policy and careful planned giving, Chambers also established several endowments and scholarships, which were approved by the LSU Board of Supervisors at the December 2005 meeting. The first recipients of these honors have not yet been named.
His estate also made funds available to add to the endowment for both the Chambers research award and the team research award that Tipton established.

Born March 24, 1918, in Line, Ark., Chambers grew up on a farm in Morehouse Parish. He received his bachelor’s degree in agriculture from LSU in 1940 and enlisted in the U.S. Army. He was a decorated World War II veteran. After the war, he earned his master’s degree in animal breeding in 1947 at LSU and his Ph.D. in animal science at Oklahoma State University in 1950. He served on the OSU faculty, where he conducted some of the ground-breaking research on cross-breeding cattle. In 1962, he was named associate director of the Oklahoma Agricultural Experiment Station. In 1964, he became director of the Louisiana Agricultural Experiment Station.

“He was able to blend his background with his strong, firm leadership style into the development of an agricultural research program in Louisiana that was envied by other states and administrators of agricultural experiment stations,” said. H. Rouse Caffey, chancellor emeritus of the LSU AgCenter who also had worked for Chambers earlier in his career.

Chambers many times was quoted as saying that if it were not for the Louisiana Agricultural Experiment Station, there would be no agriculture in Louisiana.

Here are some other gems of wisdom from Chambers that keep his memory alive:
Linda Foster Benedict
4/10/2006 8:31:40 PM
Rate This Article: