Long-term Management of Perennial Weeds Starts in the Fall 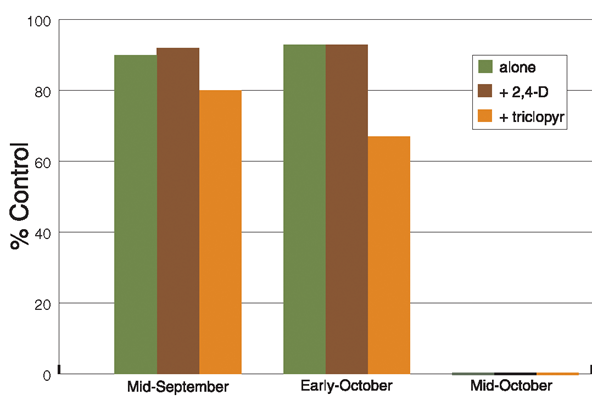 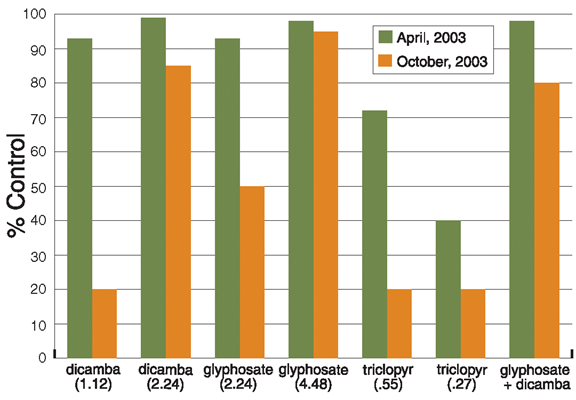 Figure 2. Redvine control in 2003 follosing fall applications of dicamba, glyphosate and triclopyr made on September 22, 2002. Rates listed in parenthesis are lb ai/A. The rates for the glyphosate plus dicamba combination were 2 and 1 lb ai/A, respectively. 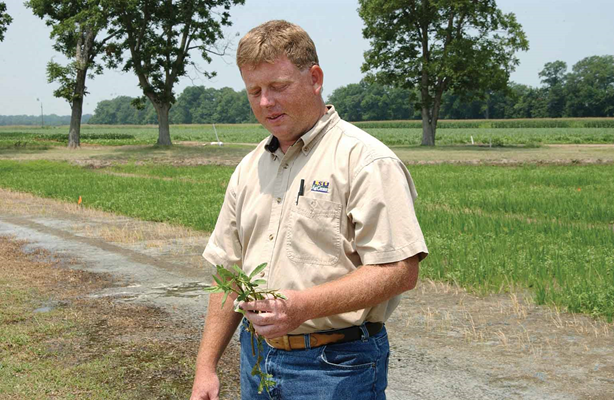 Bill Williams holds a sample of alligatorweed at the Northeast Research Station at St. Joseph. (Photo by Mark Claesgens)

Perennial weeds such as alligatorweed and redvine are becoming more difficult to control as producers adopt conservation tillage practices. These weeds begin spring growth before crops are planted and are difficult to manage even with multiple herbicide applications. Fall applications of the herbicide glyphosate for johnsongrass and dicamba (Banvel, Clarity) for redvine have long been recommended for managing these weeds. A standard recommendation for alligatorweed has not been established.

Many producers complain of inconsistent results from fall herbicide applications and the high cost of dicamba for redvine control. Most fall applications have been made in late October to early November. One of the main reasons for this is because those are the earliest dates possible following many cotton crops. Another important reason is that it is commonly believed that the best time for fall applications is within a couple of weeks of the first frost.

In recent years the best johnsongrass control following Fall corn harvest has been observed in September. The increased use of a cotton-corn rotation provides an opportunity for producers to make earlier fall applications. Glyphosate prices have dropped dramatically in recent years, which may make high rates of glyphosate more economical. The objective of this research was to evaluate fall herbicide programs for managing alligatorweed and redvine.

Research Approach
Studies were established in the fall of 2003 near Monroe, La., to evaluate fall applications of herbicides for alligatorweed control. The field was planted to rice in 2002 and 2004 and fallowed in 2003 and 2005. During the fallow years the field was disked 2 to 3 times and leveled. The field was not tilled during the cropping years. In the first study, several phenoxy herbicides (Tordon, Banvel, 2,4-D and Grandstand) and glyphosate were applied on Sept. 15, 2003. Alligatorweed control was evaluated monthly from March to October in 2004 and in April and September of 2005. A second study evaluated the effect of application timing on alligatorweed control with glyphosate, glyphosate plus 2,4-D and glyphosate plus triclopyr (Grandstand).

In the fall of 2002, a study was established near Crowville, La., to evaluate fall applications of herbicides for redvine control. The field was planted to cotton in 2001 and 2003 and planted to corn in 2002 and 2004. The field was prepared for planting in the fall by clipping stalks and re-hipping (or re-shaping the planting beds) within two weeks of harvest. Cotton was harvested early in 2003. As a result, the field was prepared for planting by early September, presenting an opportunity to investigate sequential fall programs. The plots from 2002 (12, 40-inch rows) were reduced to 4-row plots and treated with dicamba (Banvel) or glyphosate in late September, 2003, or not treated at all. A second study was established in the fall of 2004 to evaluate the effect of glyphosate application timing and rate on redvine control. Two replications were near Crowville, La., and two replications were near Saint Joseph, La.