Weeds in Corn and Grain Sorghum 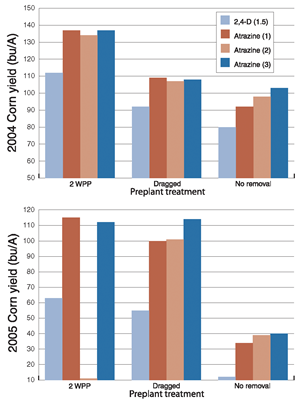 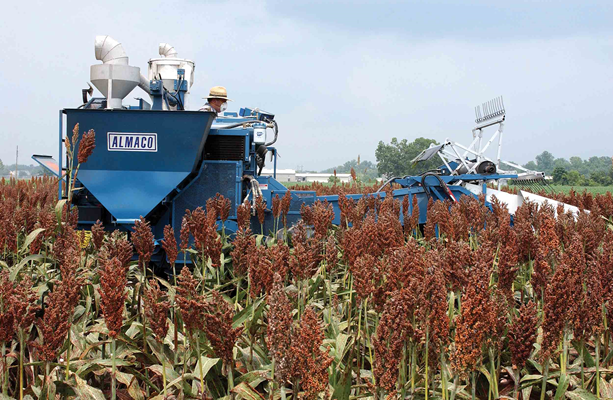 Most producers recognize the importance of managing weeds in corn and grain sorghum and do an excellent job with the tools available. The main weakness in many weed management programs is the lack of early season weed control, which can be critical to maximizing yield. Research indicates that weed interference with corn and grain sorghum is most critical from emergence through the 6- to 8-leaf stage or four to six weeks after emergence.

Preplant Burndown
Most burndown programs use glyphosate or paraquat to kill winter vegetation before planting. Both herbicides fail, however, to control cutleaf eveningprimrose, curly dock, swinecress, Carolina geranium, Italian ryegrass and Pennsylvania smartweed. To increase control, glyphosate and paraquat are commonly tank-mixed with 2,4-D, dicamba, oxyfluorfen or a commercial mix of thifensulfuron plus tribenuron.

Killing weeds three to four weeks before planting corn or grain sorghum is critical to maximizing yields. In most cases this means herbicides should be applied six to eight weeks before planting. Two common misconceptions regarding burndown programs are that if insects are managed properly, burndown weed control programs can be initiated closer to planting and that cool-season weeds will die naturally and do not need to be controlled before planting. These approaches can cause a drastic reduction in weed control and yield.

Recent research demonstrates the importance of removing weeds before planting, regardless of insect problems. Studies in 2004 and 2005 compared three management strategies on stale seedbeds – fields that were prepared the previous fall.

In 2004, corn yields were largest in plots where weeds were killed before planting. See Figure 1. Mechanically removing the weeds off the tops of the seedbed before planting was better than doing nothing at all but still resulted in an average yield reduction of 20 percent. On average, planting on a weedy seedbed and then removing weeds just after crop emergence resulted in a 30 percent yield reduction.

Corn yields in 2005 were similar for killing weeds or mechanical weed removal before planting. Planting on a weedy seedbed and killing weeds later resulted in an average yield reduction of 65 percent.

In-season Weed Management
In recent years, annual grasses have developed into larger problems in corn. This is largely due to the dependence on atrazine for herbicide control of both annual grass and broadleaf weeds. Atrazine does not control annual grasses when applied alone at labeled use rates. Another contributing factor is that late applications of nicosulfuron (Accent) aimed at controlling johnsongrass does not control some annual grasses consistently.

Many corn producers have been reluctant to use residual grass herbicides, such as metolachlor (Dual II Magnum), dimethenamid (Frontier), alachlor (Lasso), acetochlor (Surpass/ Harness) and pendimethalin (Prowl) because of inconsistent results. This inconsistency may be due to a lack of residual herbicide present in the soil by the time annual grasses actually germinate in April.

Because of this, producers have increased their use of Accent, which controls several annual grasses when they are small. Accent often fails, however, to control grasses when they are larger. Because most Accent applications target 12- to 18- inch johnsongrass, most annual grasses are too large to control when the herbicide is applied. Furthermore, Accent does not consistently control crabgrass or yellow foxtail. Steadfast, a commercial premix of Accent and rimsulfuron (Resolve), is more effective at controlling annual grasses including crabgrass and foxtail but must still be applied to small plants.

Weed management in conventional corn can still be as effective as weed management in Roundup Ready corn. The choice to use one or the other should be based on hybrid, cost of weed control and drift management. Resistance management is another issue that needs to be considered. Heavy reliance on glyphosate is beginning to lead to the development of glyphosate- resistant weeds. Worldwide, eight weeds have been identified with resistance to glyphosate – palmer amaranth, common ragweed, hairy fleabane, marestail/horseweed, goosegrass, Italian ryegrass, rigid ryegrass and buckhorn plantain. Glyphosate resistance in palmer amaranth (in Georgia), common ragweed (in Arkansas and Missouri) and horseweed (in several states including much of the Mid-South, but not Louisiana) are of particular concern because of their proximity to Louisiana. To prevent or slow down glyphosate resistance, the LSU AgCenter recommends rotating or using various herbicides with modes of action different from glyphosate.

Grain Sorghum
Atrazine is the predominant broadleaf herbicide used on grain sorghum and can be applied preemergence or postemergence. As in corn, atrazine alone does not control annual grasses and must be applied with one of the residual grass herbicides. With the exception of Prowl, grain sorghum must also be treated Concept to prevent crop injury.

Weed management in corn and grain sorghum is necessary to achieve maximum yield. Many weed control options exist, and producers must decide which one is best for them to use. If good weed management practices are followed, producers should find it easier to maintain cleaner fields and have higher yields.

Acknowledgment: Louisiana Soybean and Grain Promotion and Research Board

(This article was published in the fall 2006 issue of Louisiana Agriculture.)