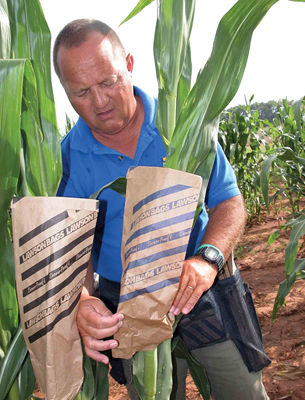 Steven H. Moore demonstrates plant breeding, which he hopes will lead to a corn line resistant to aflatoxin. He starts by placing bags over the silks from developing ears and ove rthe tassels. This helps prevent contamination from unwanted pollen of other corn lines. (Photo by John Chaney)

Aflatoxin is perhaps the major production concern for Louisiana corn growers. Aflatoxin is a potent carcinogen, and the FDA permits no more than 20 parts per billion in corn sold for human consumption.

Aflatoxin is produced by the naturally occurring fungus Aspergillus flavus, and its growth on corn is enhanced by hot, dry conditions. Although efforts have been made over the past three decades to reduce aflatoxin, little can be done to keep contamination at a relatively low level in a high-incidence year. New approaches have begun to emerge that may help to significantly lower aflatoxin contamination. AgCenter researchers are looking at three methods of control – genetic, chemical and biological – that might soon help Louisiana corn producers.

Screening for Resistance
Corn lines from the world collection are being systematically screened for resistance at the LSU AgCenter’s Dean Lee Research Station in Alexandria. Because many of the estimated 40,000 to 60,000 corn lines worldwide are poorly adapted to Louisiana, they are first cross-pollinated with the popular corn inbred B73 to produce F1 hybrids with more robust growth and corn ears.

The F1 hybrids are screened for resistance to aflatoxin by inoculating them with fungal spores of Aspergillus flavus in field plots. Resistant corn lines are then included for comparison in field screening trials. The first 300 lines were planted in 2003, followed by 500 in 2004, 300 in 2005, and 500 in 2006.

Eleven corn lines selected from the screening trials are now being advanced in a breeding program. Seed from the F4 generation should be available in 2008 to compare with resistant lines currently available. If superior resistance is found, the AgCenter will pursue cooperation with commercial seed producers to incorporate resistant genes into commercially useful hybrids. The goal is to provide Louisiana corn farmers with high-yielding, resistant corn hybrids to protect their crop.

Testing New Hybrids
Five public-sector corn breeding programs in the United States are developing aflatoxin-resistant hybrids. In addition to the AgCenter, they are U.S. Department of Agriculture-Agricultural Research Service locations in Tifton, Ga., and Starkville, Miss., Texas A&M at Lubbock and the University of Illinois. A Southeast Regional Aflatoxin Test was initiated in 2003 to allow multi-state testing of hybrids from these programs. Each year, participants have the opportunity to determine performance of hybrids from their programs at the sites of each participating scientist.

Eleven experimental hybrids showed superior yield and lower aflatoxin than the commercial hybrids DKC 69-71 and DKC 69-72 in 2005 at the AgCenter’s Dean Lee Research Station in central Louisiana. These data indicate that progress has been made in developing commercially viable hybrids with superior resistance to aflatoxin growth.

In addition, 19 hybrids from the University of Illinois breeding program may be the first generation of commercial hybrids with resistance to aflatoxin. They were grown at the Dean Lee Research Station in 2006 to see how they perform in a Louisiana environment.

Glufosinate Treatment
A second technology to reduce aflatoxin in corn was initiated in 1998 in the Department of Plant Pathology & Crop Physiology in Baton Rouge, where glufosinate was applied to corn between silking and maturity. Glufosinate is the active ingredient in Liberty herbicide and is known to trigger ammonia (NH3) production in plant cells and probably also in the fungus. Ammonia breaks down aflatoxin and is toxic to the fungus.

Initial results from field trials at the AgCenter’s Ben Hur Farm in Baton Rouge and Macon Ridge Research Station in Winnsboro involving more than a dozen hybrids showed about a 70 percent reduction in aflatoxin over a three-year period in Liberty-resistant (Liberty Link) and non-Liberty Link corn. Later field trials from Louisiana and other states using a relatively high rate of the herbicide (34 ounces per acre) gave unpromising results.

Results from the herbicide application have clearly varied. Some differences may be explained by the treatment method or timing. The environment may also have a significant effect. Field experiments continue to try to determine the efficacy of the approach. Positive results may allow producers the opportunity to significantly reduce aflatoxin in a threatened crop at a relatively low cost.

Biological Control
Many naturally occurring strains of Aspergillus flavus found in field environments do not produce aflatoxin. They are called atoxigenic. A new technology being investigated in the AgCenter and other institutions is using these atoxigenic strains to reduce aflatoxin. The objective is to use aggressive atoxigenic strains of Aspergillus flavus that will out-compete toxic strains at infection sites in the corn ear. The fungus, which itself is relatively harmless, will still grow but will not produce aflatoxin.

Work in the plant pathology department is focusing on understanding the biology of the fungus and how it inhibits toxin production. A collection of 49 strains of Aspergillus flavus from corn produced in Louisiana revealed that 40 were atoxigenic. These were screened by growing them with a toxin-producing strain to see how effectively they reduced aflatoxin synthesis. Eight of the nontoxigenic strains completely inhibited the toxigenic strain, and four others had a highly significant effect. Several of the atoxigenic strains were studied further in field tests in 2006.

The AgCenter is making progress in evaluating and incorporating new technologies to reduce aflatoxin contamination in Louisiana corn fields. It is possible that a combination of two or more technologies might provide acceptable control. The outlook is brighter today than five years ago. Louisiana corn producers may soon have more tools to combat aflatoxin contamination.

Acknowledgment: Louisiana Soybean and Grain Research and Promotion Board