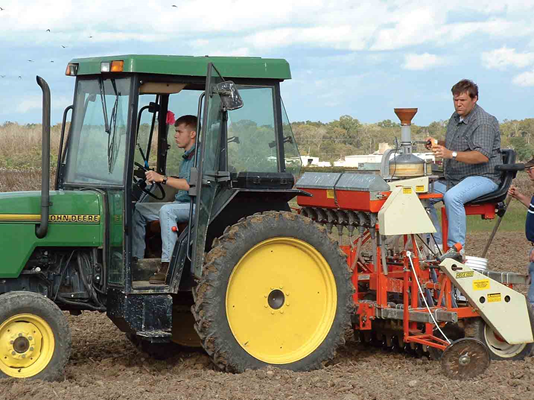 Each breeding line and variety is individually packaged and planted one at a time using specialized plot planters. This photo was taken at the LSU AgCenter’s Ben Hur Research Farm in Baton Rouge, which is part of the Central Research Station. (Photo by Stephen A. Harrison) 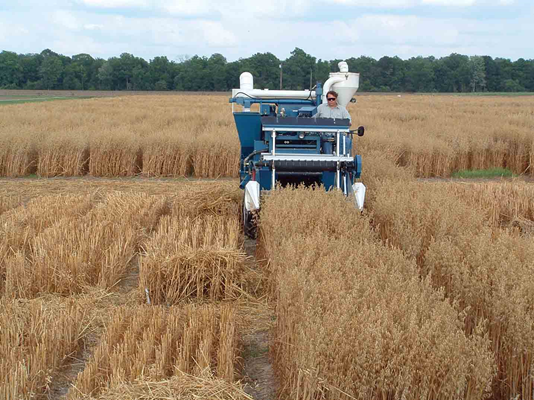 Kelly Arceneaux, research associate, cuts oats with a combine at the Ben Hur Research Farm in Baton Rouge. Small plot combines allow yield and quality to be determined for each line tested and permit harvest of pure seed for increase. (Photo by Stephen A. Harrison) 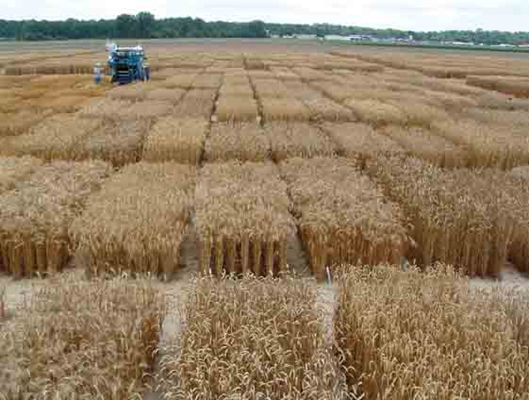 (Photo by Stephen A. Harrison)

Plant breeding and variety development requires hard work. Plant breeders spend long hours in the field evaluating breeding lines and gaining an appreciation of the interaction between the genetic systems of the plant and the various insects and fungal, bacterial and viral pathogens they interact with. The best plant breeding genetic material has evolved over many years to contain an assemblage of genes uniquely adapted to the target environment. This germplasm pool is refined over generations of recombination and selection because only the best lines are chosen for crossing to produce the next cycle.

From an initial cross to a commercial variety takes about 10 years, and only a small fraction of crosses actually lead to a new variety. When a plant breeder makes a cross between two parental lines, he or she is trying to predict the environment, range of disease and insect problems, and other factors that will be important 10 years later. The target in plant breeding programs changes constantly.

The LSU AgCenter wheat and oat breeding program receives support from federal and state appropriations but also has several other sources of funding. The Louisiana Soybean and Grain Research and Promotion Board has supported the LSU AgCenter wheat breeding research every year since the feedgrains check-off was approved by growers. The program also receives funding through competitive grants for research on wheat diseases. Royalties collected from sales of released varieties are returned to the LSU AgCenter and used, in part, to support the breeding program. Other sources of funding include unrestricted donations from Quaker Oats, for example.

58-year Span
There was a span of 58 years between the release of Camellia oat in 1940 and the next Louisiana small grain variety release, Secretariat LA495 oat, in 1998. Most of the wheat and oat research conducted in the Louisiana Agricultural Experiment Station between 1940 and 1985 focused on statewide variety trials and cultural and production practices for wheat. For much of that time small grain varieties were supplied by several private breeding programs in the southern United States, but most of those programs have been terminated.

The LSU AgCenter established a breeding program in 1985 that focused on development of wheat varieties specifically adapted to the needs and conditions of Louisiana and surrounding Gulf Coast states. During that first spring there were 83 wheat crosses made in the field, and another 31 were obtained through exchanges with other programs. By the spring of the 2006, the AgCenter program had made more than 5,200 wheat crosses and 850 oat crosses and released 10 varieties.

It Takes Teamwork
The LSU AgCenter small-grain breeding program has continually evolved over the past 20 years and is a team effort that involves agronomists and pathologists at research stations around the state, several research associates, and six to eight student workers at any given time. The program began at the Agronomy Department Perkins Road Farm with a beat-up plot combine, 200 yield plots and about 100 headrows individually planted with a push-type planter.

For the first 10 years almost all of the breeding activities were carried out in Baton Rouge to take advantage of student help and allow the breeder to work in the nursery every day in the spring. The program is still based in Baton Rouge at the Ben Hur Research Farm near the LSU campus, where about 4,000 yield plots and 45,000 headrows are grown each year. This environment in the Mississippi River floodplain produces heavy disease pressure every spring, which facilitates selection for breeding lines with superior genetic resistance. The downside to this location is that it is a risky place to produce seed because of frequent heavy rains in the spring, and varieties adapted to Baton Rouge may not be adapted to north Louisiana.

Macon Ridge
The Macon Ridge Research Station in Winnsboro is the site of extensive wheat research projects each year and has become a second home to the wheat breeding program. During 2006, there were 18 breeding and variety testing yield trials that included more than 2,000 plots at this location. In addition, there were numerous seed purification and increase blocks and several fungicide, crop rotation, fertility and disease research studies. The majority of pure seed production and increases for the wheat program are carried out in Winnsboro. Breeding lines that perform well at Winnsboro generally produce varieties that perform well across the Gulf Coast region.

Germplasm Exchange
The breeding program has an extensive network of cooperators in other states, particularly the breeders in the Southeastern University Grains consortium (SUNGRAINS). See the article on page 12. The SUNGRAINS program allows for extensive testing across multiple states and has increased the exchange of germplasm among breeders.

Germplasm is the raw material from which varieties are developed. Access to germplasm makes a breeding program more efficient. The LSU AgCenter oat program works closely with the University of Florida oat breeding program including a shared summer nursery in Idaho, extensive exchange of breeding lines and populations, and cooperative testing activities. All large seed increases of oat lines for variety release have been produced by Florida Foundation Seed at Marianna, Fla., which reduces the need for the AgCenter to maintain an expensive foundation seed program and helps keep the Florida program operating at capacity.

Uniquely Louisiana
The wheat breeding program strives to develop locally adapted, high-yielding varieties with good test weight resistant to the important diseases such as leaf and stripe rust. Louisiana’s unique climate — high rainfall, heavy disease pressure and warm, fluctuating temperatures during the growing season — limits the performance of wheat varieties developed in cooler regions. The vernalization (cold chilling) requirement of varieties grown in Louisiana must be long enough to prevent wheat from heading out during frequent winter warm spells, which helps avoid spring freeze damage. The vernalization cannot be so long, however, that heading is delayed and grainfill occurs in hot weather or not at all. Heading date for wheat varieties adapted to Louisiana is usually controlled by a combination of vernalization requirement, heat units and photoperiod response.

Remix
The initial stage of variety development begins with the crossing of two parental lines to re-combine the genes that control desired traits in both parents. There are, for example, more than 50 identified major genes that condition resistance to wheat leaf rust. Each variety has a combination of one or more of these genes. Unfortunately, the fungal organism that causes wheat leaf rust also has corresponding virulence genes that allow it to overcome the resistance genes. As one plant breeder put it: “There ain’t never been a horse that couldn’t be rode or a rider that couldn’t be throwed.” This means there has never been a new disease strain that we couldn’t develop resistance for, but that resistance does not last forever because the pathogens also have genetic systems and change in response to varieties.

During the early generations the majority of progeny are discarded as unsuitable. During the F2 (second) generation about 2,000 seed are space-planted per cross to allow individual plant evaluation and selection. Each population resulting from a cross is evaluated in the field for plant type, maturity, disease reaction and appearance during the first three to four generations. Only the best plants are harvested and advanced. Molecular markers are used to aid in selection of some populations during this stage of development, depending on the availability of markers for traits of interest.

Beginning in the third or fourth year, individual heads from selected plants are threshed one head at a time, and the 30-40 seed from a given head are planted as one of about 45,000 headrows grown each year. Headrows are selected more intensely than the earlier generation populations. By the fifth year about 1,000 elite headrows will be harvested as entire rows to produce about a half pound of seed for observation yield plots.

Yield testing begins in the fifth or sixth generation after a cross. By this time the number of surviving lines per cross has been reduced substantially through selection. About 1,000 wheat observation plots along with check varieties are planted each year at Baton Rouge and Winnsboro. Each observation plot is evaluated for all traits important in Louisiana, and about 300 are chosen for harvest with a small plot combine. Grain yield, test weight, disease reaction, agronomic characteristics and seed quality determine which of these 300 will be advanced to replicated yield trials at several locations. By about the eighth year after crossing, there are only a few dozen breeding lines remaining from the 700,000 genetically distinct plants evaluated in the F2 generation.

Seed increase and purification begins when lines enter the statewide yield trial stage. About 50 wheat lines are increased in seed strips at Winnsboro each year. These are walked repeatedly during the spring, and off-type plants are eliminated. Six to eight larger seed increases are grown at Winnsboro each year to produce up to 10 to 200 bushels of seed each. By the 10th year of the program, the handful or remaining lines have been evaluated in yield trials across the region and have been exposed to all of the various disease and insect pests.

Marketing
The breeding program releases one or two wheat or oat varieties a year, and these varieties should have an active life span of four to 10 years each. Once a release decision is made by LSU Ag- Center scientists, the released variety is normally licensed to a private company for marketing. Licensing to a private company ensures that the elite variety developed is produced and made readily available to growers. Universities have the scientific wherewithal to develop superior varieties but generally lack the infrastructure and expertise to deliver those varieties to growers.

Crop varieties developed by universities ensure that growers have a choice among locally-adapted, economicallypriced and high-performing varieties. Crops such as wheat, rice, sugarcane, sorghum and oats that do not produce large returns to seed companies are dependent on university breeding programs such as the small-grain breeding program of the LSU AgCenter.