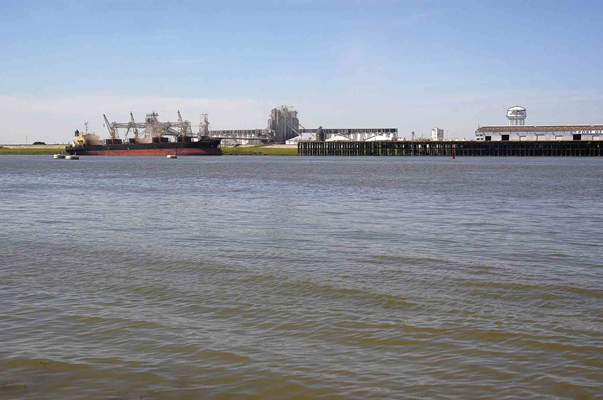 In 2004, more than half the grain exported from the United States passed through the Mississippi River Gulf Grain Transportation and Handling Complex, called the MRG. “The MRG comprises nine export elevators between Port Allen and the mouth of the Mississippi River,” said Wayne Gauthier, an LSU AgCenter economist. “Only two are capable of handling trucks in addition to railcars, barges and ships.” This photo of soybeans was taken at the Port of Greater Baton Rouge. The port’s grain elevator, operated by Cargill AgHorizons, handles roughly 15 percent of Louisiana’s grain crop and serves rural parishes in the area. (Photo by Bruce Schultz)

When Hurricane Katrina hit the Gulf Coast on August 29, 2005, it disrupted grain transportation on the Mississippi River. As U.S. grain moves from farms to markets, it passes through elevators that accumulate the grain, blend it together to meet quality grade requirements and ship it on.

In 2004, 54 percent of all the grain exported from the United States passed through the Mississippi River Gulf Grain Transportation and Handling Complex, called the MRG.

“The MRG comprises nine export elevators between Port Allen and the mouth of the Mississippi River,” said Wayne Gauthier, an LSU AgCenter economist. “And only two are capable of handling trucks in addition to railcars, barges and ships.”

Throughout the interior U.S. grain handling system, trucks handle about 56 percent  of the domestic grain transportation while railroads move 41 percent and barges move 3 percent. But for export grain transportation going through the MRG, only 1 percent moves by truck and 14 percent moves by rail. Barges account for moving 85 percent of the grain destined for export. And it all moves out of the country on ocean-going ships.

This dependence on ships and barges was responsible for hurting U.S. grain markets for many days following Katrina at the river-based grain elevators.

“Although Katrina did not destroy any export elevator, it initially reduced to zero the grain-handling capacity of any elevator,” Gauthier said. “They were out of commission because there was no power and their labor force was scattered. The absence of power meant they could neither load out ships nor receive grain from barges, rail cars or trucks.”

In addition to serving a transport function, barges also perform a storage function, Gauthier said. And because of Katrina, grain was in barge storage for an extended period, which effectively reduced the supply of barges available for bringing grain down from the Midwest. This is partly responsible for the stories about grain being dumped on the ground in the Midwest. Also, some of that grain spoiled in those barges, and these had to be cleaned for an additional cost.

“On top of everything else, Katrina caused some channel shifting and destroyed channel markers in the Mississippi River,” Gauthier said. “This effectively delayed the arrival of the ships, which take the grain out of the country.”

Gauthier said that because of the time of year Katrina hit Louisiana, the disruption affected primarily corn from the Midwest. The majority of the Louisiana corn harvest had been completed, but soybean harvest was just getting underway. The Midwest wheat harvest also had ended, but the northern soybean harvest had barely begun. The bottom line, however, is that Hurricane Katrina struck at a time of peak requirements on the U.S. grain handling and transportation system.

Gauthier said the grain industry lost 3 to 4 weeks of grain shipments from Gulf elevators. A barge shortage continued into October, with indications that a backlog of as much as one-third of the Mississippi River System grain barges were waiting to be moved or unloaded.

“The bottom line is that the volume of grain normally exported through the MRG was reduced, which increased the supply in the United States, which caused declines in prices and thus incomes,” Gauthier said.

U.S. corn and soybean prices are established through daily trading on the Chicago Board of Trade. But that is not the price farmers get. Prices at country elevators are determined by the CBOT prices minus what is called the basis – an amount of money primarily representing the cost of transportation. Basis is the difference between prices in the futures market and prices in the cash market.

One result of the backlog from Katrina was a sharp reduction in cash prices, which widened the basis, causing farmers to hold grain and wait for better prices from their elevators. In some cases, farmers and even grain elevators were storing corn on the ground because they had nowhere else to put it.

Because so much grain is traded on the futures markets, wider basis prices held negative economic implications for various participants in grain markets, Gauthier said. Reduced volumes of exports translated into reduced earnings for individuals and organizations directly engaged in grain exports as well as their suppliers.

Gauthier said no corn was shipped through the MRG from August 29 to September 9, 2005. Corn exports for the balance of the year were 3 percent below the levels before Hurricane Katrina, which is difficult to make up.

“Since 54 percent of all the grain exported from the United States passes through the New Orleans port, disruptions such as Katrina have major economic implications for both domestic and export grain markets,” Gauthier said.