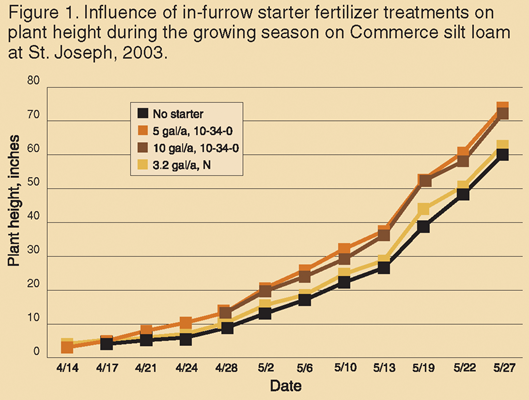 Table 1. Influence of starter fertilizer on average mid-silk date and harvest grain moisture in 15 trials on Commerce silt loam at the Northeast Research Station at St.Joseph, 1991 through 2005.

The mid-March to early April planting dates required for optimal corn production in Louisiana often result in exposure of seedlings to lower than optimal soil temperatures. Low soil temperatures may result in slow plant growth and temporary phosphorus (P) deficiency, even though levels of soil P may be considered adequate for plant growth.

Phosphorus deficiency symptoms on corn seedlings are commonly seen and are most pronounced on the sandy loam and silt loam Mississippi River alluvial soils with organic matter content less than 1 percent. Soil temperature at the 2-inch depth in early March on Commerce silt loam, for example, may be as much as 5 degrees F lower than on clay soils. Symptoms of phosphorus deficiency rarely occur on the finer-textured silty clay and clay soils.

Several trials were conducted at the Northeast Research Station near St. Joseph, La., to evaluate the effectiveness of in-furrow starter fertilizers. Corn was planted following cotton from early March to early April at about 28,000 seeds per acre. Liquid ammonium polyphosphate fertilizer formulations of 11-37-0 or 10-34-0 were applied at rates ranging from 2.5 to 10 gallons per acre. In most trials, the recommended rate of 4 to 5 gallons per acre was compared to a no-starter control. Grain yield, silk date and harvest grain moisture were determined along with monitoring of plant development during the growing season (plant dry weight and plant height). Soil P levels in the test area were considered high each year, according to analyses conducted by the LSU AgCenter Soil Testing Laboratory.

Phosphorus deficiency symptoms and starter responses were most common on the coarser soils. The largest yield response (25 bushels per acre) occurred on a sandy loam soil. These sandy, light-colored soils with low organic matter are cold-natured, and plants are more susceptible to reduced earlyseason P availability than heavier textured soils. This probably accounts, to a large extent, for the low incidence of earlyseason P deficiency symptoms and smaller yield responses to starter on clay soils.

Although starter fertilizer increased yield in only one-third of the trials, early-season plant growth was increased in all trials. A typical plant growth response to starter is shown in Figure 1. Two rates of starter increased plant height from the early seedling to tassel growth stages, while a starter with nitrogen (N) alone had little effect on plant growth. This confirmed that growth responses on medium-textured soils are primarily due to the P component, probably because of reduced phosphorus availability on cold-natured soils.

The enhanced plant growth hastened maturity, which was reflected in advanced mid-silk dates and lower harvest grain moistures. Starter fertilizer reduced mid-silk dates by four days when yield responses occurred and by three days when no yield response occurred (Table 1). Harvest grain moisture was 1 percent lower in trials with starter yield responses and 0.5 percent lower in trials with no yield response to starter. This could result in earlier harvest and lower drying cost, which may lead to higher net profit. Early, rapid plant growth also hastens canopy closure, reducing weed development and the need for herbicides.

(This article was published in the fall 2006 issue of Louisiana Agriculture.)