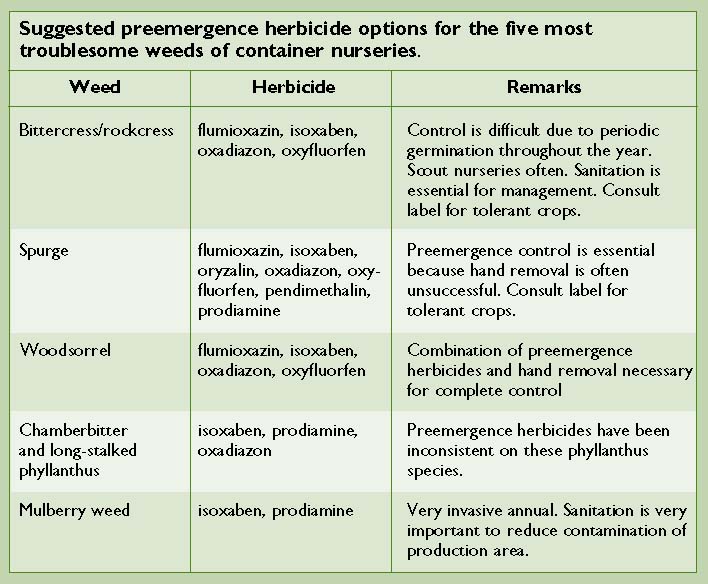 Weeds compete with nursery crops for water, nutrients and light and can potentially harbor insects and diseases. They are common in all container nurseries and can cause significant losses in product quality and quantity. Effective and economical weed control in nursery crops involves the ability to identify weeds correctly so weed problems can be remedied. The most troublesome are those difficult to manage because of heavy seed production, unique mechanisms of seed dispersal, and lack of sufficient control methods.

Although weed problems vary at nurseries, the following weeds cause the most problems in container nursery crops in Louisiana.

, a member of the mustard family, is considered the most problematic weed in container nursery production in Louisiana. In the wild, bittercress behaves as a winter annual, but it germinates year-round in optimal growing conditions found at nurseries. The plant can produce as many as 5,000 seeds and can expel mature seeds two to three feet. Seed are extremely viable and can germinate immediately when growing conditions are favorable. Bittercress matures quickly and is capable of producing seed 4 weeks after germination.

, members of the poinsettia family, are prolific seed-producing annuals that thrive in hot weather. Under optimum growing conditions, plants can go from seed to flower in only three weeks. Some spurges have a more-prostrate growth habit, which can form dense mats. Other spurge species grow more upright. Several different species of spurges are common in container nurseries including prostrate spurge, spotted spurge and garden spurge.

Broken spurge stems emit a milky latex that can be helpful in distinguishing this plant from other species. The plants are difficult to manage in container nurseries because of heavy seed production and the difficulty of removing them by hand. Plants often break at the stem during this process, leaving the root and several buds or
a single stem available for potential reestablishment.

is a perennial weed that produces numerous creeping above- and below-ground stems and deep tap-roots that make hand removal difficult. The plants are heavy seed producers and possess an efficient method of seed distribution. At maturity "okra-shaped" seedpods burst open and expel seed 10 to 12 feet in all directions. Woodsorrel has three heart-shaped leaf components that vary in color from dark green to reddish purple. Two species of wood-sorrel are common in container nurseries in Louisiana. Creeping woodsorrel has a prostrate growth habit and produces numerous above-ground stems; yellow woodsorrel grows more upright and produces below-ground stems.

are extremely invasive summer annuals. Populations of these two plants have increased significantly since their introduction from Asia because of their prolific seed production and tolerance to most preemergence herbicides labeled for use in ornamentals. Both plants resemble hemp sesbania or mimosa seedlings. However, the most distinguishing characteristic of the two species is the round seed capsules located on the underside of slender branches. Chamberbitter is a stout, more-branched plant with seed capsules borne in the axils of leaves. Longstalked phyllanthus is an erect, slender plant with seed capsules attached to stalks.

, native to Asia, is an upright summer annual. The plant has an upright growth habit and can grow to a height of 3 to 4 feet. Leaves are triangular-shaped, serrated and prominently veined. Plants resemble seedling mulberry; however, mulberry weed has hairy leaves and stems and is non-woody. Mulberry weed has unique feathery flowers that first appear purplish and then brown as they mature. Plants are prolific seed producers and can forcefully expel seed up to 4 feet. The weed develops quickly, can go from seed to flower in less than two weeks and can produce several generations in one growing season. Mulberry weed is invasive and continues to spread throughout container nurseries in Louisiana.

Managing troublesome weeds in container nurseries is a difficult and expensive task. Therefore, preventing weed establishment is essential to reduce weed populations and lower production cost. Effective weed management begins with sanitation, which is extremely important for reducing the opportunity for weed seed contamination in nursery crops. This includes controlling weeds in noncrop areas around the nursery and in gravel or fabric areas where container crops are placed. Weed seeds also adhere to soil on the outside of pots, the pots should be washed before being reused.

Preemergence herbicides are an important tool to aid in the management of troublesome weeds. They work by forming a chemical barrier in the upper one-half to one inch of the potting medium where most seeds are germinating; however, timing is critical for success. Herbicides must be applied before weed emergence. Failure to apply preemergence herbicides in container crops before weeds emerge will usually limit growers to costly hand removal.