This is a camellia at the George Hawkins Nursery in Forest Hill, La. 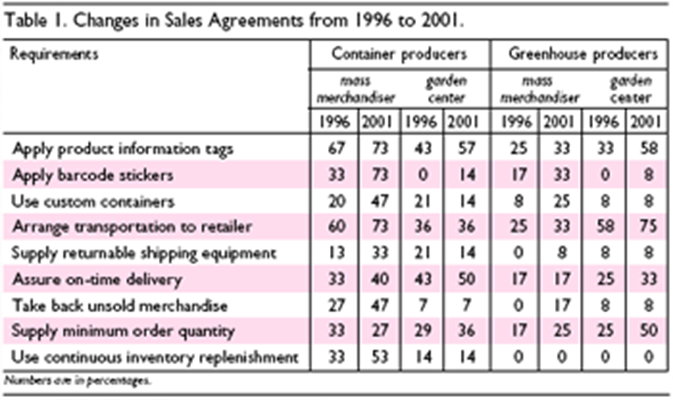 Market channels used by wholesale nursery growers in Louisiana have changed. Traditionally, growers sold their products to garden centers, hardware stores, feed and seed stores, landscapers and re-wholesalers. Although landscapers and re-wholesalers continue to be important sales outlets, retailers are the market component where dynamic change has occurred. Mass merchandisers (either general merchandise or home center) have replaced garden centers as the dominant type of retailer. Overall, this channel has captured more than 40 percent of the market, and the percentage of households making purchases of lawn and garden products from mass merchandisers grew from 32 percent in 1996 to 45 percent in 2001.

Three significant and related forces drive change in the nursery industry. Some mass merchandisers have become big enough, as measured by total sales and market share, to influence access to the consumer.

These latter two factors reduce transaction costs because large retailers ask suppliers (growers) to use electronic technology for order placement, inventory management, and reconciliation and payment. Growers who choose not to adopt these innovations may be shut out of this faster-growth component of the market. But regardless of channel, growers increasingly are taking the nontraditional role of managing the flow of product to market.

Mass merchandisers, by virtue of sales volume, influence the terms of trade with supplier companies. They prefer to purchase from suppliers who can provide large volumes of a broad selection of products. But few nursery growers in the United States are able to supply a significant portion of the products demanded by any one mass merchandiser. As in Louisiana, U.S. nurseries are far smaller than the large retailers, so the market relationship tends to favor the retailer.

These changes in retailer structure can influence nursery profitability several ways. Growers who do not sell to mass merchandisers lose access to a growing market segment. On the other hand, prices received from the large retailers often are at the lower end of the range, and these retailers can be unreliable partners, changing suppliers based on price. Finally, they may require specific terms of sale.

Historically, the sales agreement between growers and retailers included little more than price and quantity. Today, customers increasingly expect growers to provide additional services as conditions of sale. Because the industry is competitive, growers are hesitant to turn down a sale because of demands to pay a cost or provide a service.

In a survey conducted in 2002 by the LSU AgCenter’s Department of Agricultural Economics and Agribusiness, Louisiana’s nursery producers were asked to specify changes that had occurred in sales agreements over the five-year period from 1996 to 2001. Nine requirements were studied as indicated in Table 1. Growers were asked to indicate which items were in the typical agreement in 1996 and which were in the typical agreement in 2001 for both mass merchandisers and garden centers.

Data in Table 1 indicate the occurrence of each requirement by type of customer and by year to provide an overall view of the relative importance of each item.

For container growers, more change occurred in the mass merchandiser channel than in the garden center channel.

Mass merchandisers most frequently included product information tag, barcode sticker and transportation in 2001 sales agreements. All were at 33 percent. Garden centers, on the other hand, included several items at much higher frequency. These included transportation at 75 percent followed by product information tag at 58 percent and minimum order quantity at 50 percent. Except for barcode stickers and custom containers, garden centers were more likely than mass merchandisers to request the surveyed items in their sales agreements.

There were substantial changes between 1996 and 2001 for both marketing channels. For mass merchandisers, three items – custom container, take back unsold merchandise and barcode sticker – were higher by 17 percentage points. Both product information tag and minimum order quantity increased by 25 percentage points while transportation increased from 58 percent to 75 percent.

Items more important to the market channels are those with higher frequency of inclusion in purchase agreements. At the top for sales agreements between container growers and mass merchandisers are product information tags, barcode stickers and transportation. To the garden center channel, important items were product information tags, on-time delivery and minimum order quantity. The higher levels for mass merchandiser do not mean that changes in garden center channel behaviors are unimportant to grower profitability.

The garden center and the mass merchandiser channels were more similar in terms of requirements on greenhouse growers, compared to container growers. Product information tags, barcode stickers and transportation were important to mass merchandisers while transportation, product information tags and minimum order quantity were important for the garden center channel.

Of the items included in this study, it can be concluded, particularly for the mass merchandiser channel, that there is some demand for all the items, especially in 2001. Garden centers, however, were less likely to include requirements for these items.

Finally, an indicator of adoption of computer-driven information handling is the continuous inventory replenishment item. Container growers report 53 percent of the mass merchandisers but only 14 percent of the garden centers require computer-driven information. Generally, larger retailers require that suppliers adopt this technology. Its use contributes to their efficiency and helps facilitate low-price strategies.

Garden centers, on the other hand, are smaller businesses and need different services from growers. In either market channel, the expansion of expectations on the part of nursery grower customers has implications for firm profitability. This is a component of the nursery business that should receive management attention.