Replication of Prehistoric Footwear and Bags 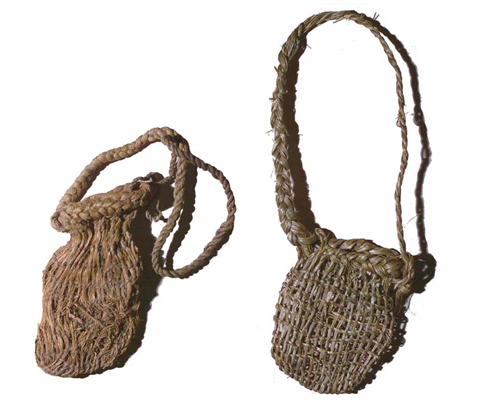 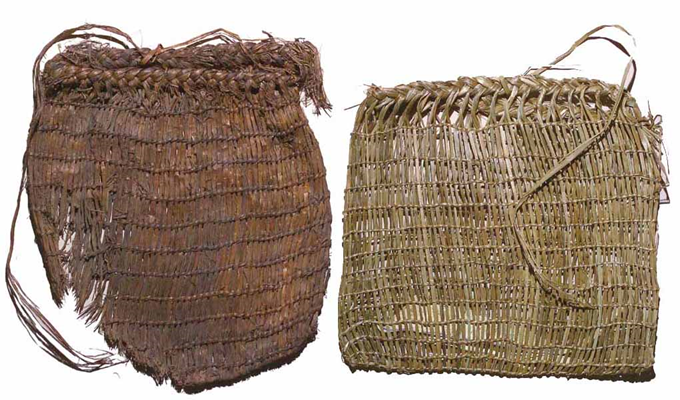 Figure 2. On the left is the original twined, flat-bottomed bag from Arnold Research Cave in Missouri (circa 900 B.C.). At right is the replication created by the researchers.

Figure 5. At left is the fibrous footwear found at Arnold Research Cave in Missouri (circa 2400 B.C.). The researchers replicated it at right. 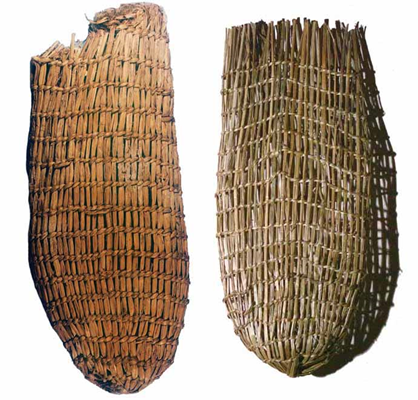 Figure 4. Undated curved-bottomed bag from Arch Vaughn Cave, Arkansas. The original is at left and the replication is at right. 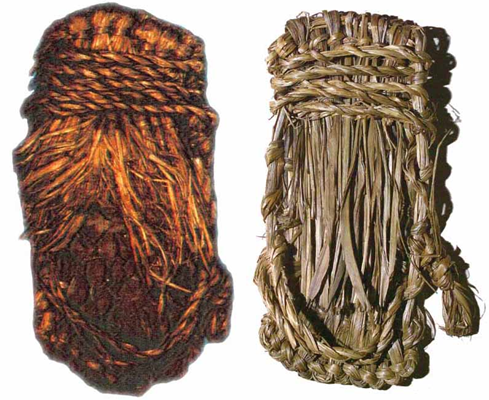 Figure 6. At left is undated fibrous footwear from Spiker Shelter, Arkansas, and the replication. 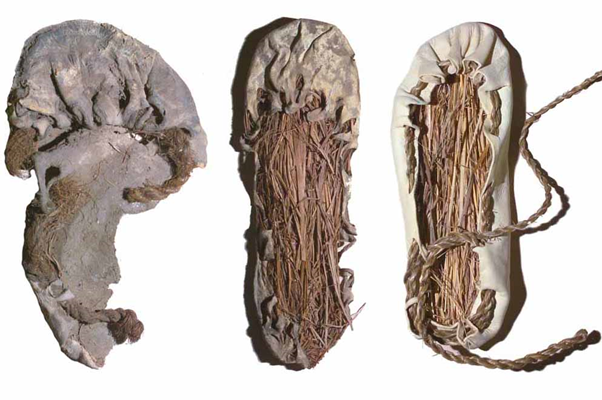 Figure 7. Two examples of leather footwear were found at Arnold Research Cave, Missouri. The specimen at left with a drawstring was dated to A.D. 1100. The specimen with padding in the center is undated. At right is the replication.

Figure 1. Researchers are growing Eyringium yuccifolium Michaux, also known as rattlesnake master or button snakeroot (foreground) at the Burden Center in Baton Rouge. This plant was used in prehistoric times in Louisiana for footwear and bags.

Although prehistoric textile remains have been recovered in South Louisiana from Avery Island (Iberia Parish) and Bayou Jasmine (St. John the Baptist Parish), no examples of prehistoric footwear or bags are known from Louisiana. However, European accounts and illustrations of Louisiana natives indicate their use here, and examples have been found in dry caves and bluff shelters in Arkansas and Missouri.

Footwear and bags are often more easily identified than other prehistoric textile remains because their shape reflects their functions. Beyond their functional aspects, footwear and bags may also reflect individual preferences and those that are regionally, culturally and temporally based. LSU scientists are investigating the production and use of these artifacts made in the Mid-South at least 8,000 years before Europeans came to this area in the 16th century. Replication of selected artifacts provides information about materials, tools, construction techniques and labor input.

The fiber source plant was identified by comparing the anatomy and morphology of known plants with samples taken from the artifacts. All of the fibrous specimens and the cord tie in one leather specimen were made from the unprocessed leaves of a plant known as rattlesnake master or button snakeroot (Figure 1). These plants would have been common in the local environment, but their growth near habitation areas could have been encouraged by prehistoric peoples.

As part of our study, we collected leaves and plant specimens in Louisiana, Missouri and Florida and are now growing rattlesnake master in an experimental plot at the LSU AgCenter’s Burden Center in Baton Rouge, La. Close examination of the field plant and archaeological specimens indicate that leaves at different stages of maturity were selectively harvested for use. The narrow immature leaves were used in bags, and the wider, more mature leaves were used in footwear.

The first bag to be replicated (Figure 2) was recovered from Arnold Research Cave in south-central Missouri. It has been radiocarbon dated to approximately 900 B.C. and is attributed to the Early Woodland cultural period. A part of one lower corner of this bag is missing; it has a flat bottom and measures 9.5 inches across at the rim and 10.25 inches deep at the complete side.

Arkansas were also replicated, a small flat-bottomed bag from Montgomery Shelter (Figure 3) and a curved-bottomed bag from Arch Vaughn Cave (Figure 4). These bags have not been radiocarbon dated, so their age and cultural affiliation are still unknown. The small bag with a handle measures 2.5 inches at the rim and 3.5 inches deep. The curved bottom bag measures 10.25 inches deep and is 4.75 inches at its widest point. The rim is missing but may never have been completed because the top of the bag appears to have been cut. The tops of some bags are known to have been left unfinished. A variety of construction tech-niques, including twining, braiding and twisting, were used to make the bags.

Before starting construction of the bags, a bundle of dried rattlesnake master leaves was soaked in water. This increased flexibility of the leaves, making it easier to bend the leaves in the warp (lengthwise elements) to construct the base. As the twining progressed, the warps started to dry and became more rigid. This actually made the twining process easier. The leaves used for wefts (crosswise elements) remained soaking until needed for twining so that they would remain flexible enough to make tight twining stitches. The ends of the warps along the top of the bag were soaked again before constructing the rim, because flexibility was needed for this step in the construction process.

The slip-on style fibrous shoe from Missouri chosen for replication (Figure 5) has been radiocarbon dated to approx-imately 2400 B.C. (Middle Archaic cultural period). It has a round toe and a sling heel. Repairs had been made to re-stitch the top of the shoe to the sides of the sole. It is similar in style to three other known Ozark specimens. An undated fibrous sandal from Spiker Shelter in northwest Arkansas was also replicated (Figure 6). It is a complete sandal with a square toe and a flat round heel. The sandal is in good condition with some wear at the heel and ball of the foot.

In all the fibrous replications, the structure of the yarns or elements varied according to how they were used in the design and construction. The rattlesnake master leaves were combined or split to produce elements with the proper width, and length was increased by overlapping the ends of the leaves within the warp and weft bundles. In some instances the leaf bundles were twisted to produce single yarns and 2-ply cordage. All of the specimens studied incorporated multiple construction techniques that included weaving, twining, braiding and twisting.

The two leather, slipper-style moccasins recovered from Arnold Research Cave in Missouri were of a similar style. The reconstruction was based on information obtained from both specimens (Figure 7). Only one example of leather footwear from all of the collections under study has been radiocarbon dated. This specimen dated to the Mississippian cultural period at about A.D. 1025, and was the latest of the seven footwear specimens dated from Arnold Research Cave. The fibrous footwear from that site dated from Early Archaic to Late Woodland cultural periods with dates starting as early as approximately 6300 B.C. Whether or not all of the leather footwear will prove to be later in date than the fibrous specimens remains to be seen, but it does suggest the possi-bility of a change in materials and techniques through time.

Through our studies, we have determined that the only tool needed when working with either the fibrous or leather materials was a cutting tool. It could have been used to cut the leaves to length or trim the ends. However, leaves of the proper length could have been selected and picked, and, if needed, leaves can be easily split to the desired width by hand. No specialized tools were needed for either the yarn or fabric construction.

Either of the larger bags can be constructed by a skilled person in two hours or less. A similar amount of time is needed to make a single fibrous sandal or slip-on. The rattlesnake master leaves for either can be picked from a good stand in 10 minutes or less.

We do not know whether women, men or both genders produced the bags and footwear. The actual construction is simple, and both products could have been made by older children as well as adults. These items could have been produced on the spot or made ahead of demand by using dried and soaked leaves.

Replication of prehistoric footwear and bags using the original materials has led to a greater understanding of the characteristics of prehistoric textiles. Our research has identified the fiber source used, indentified the probable steps required to produce such artifacts and clarified specific or detailed aspects of their construction processes. Many of the decision-making processes required to design and construct these artifacts became more apparent. This new knowledge increases our understanding of lifestyles in the prehistory of the Mid-South.