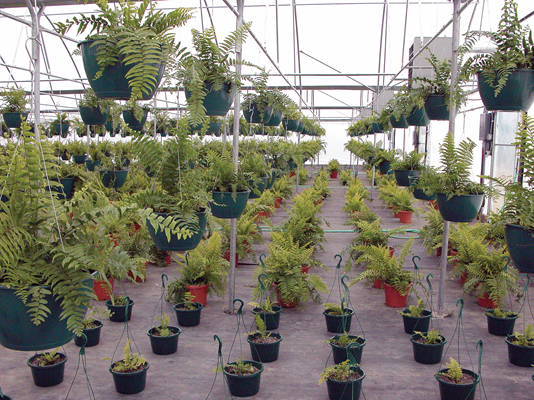 These are ferns and foliage plants at Hickory Hill Nursery in Forest Hill, La. (Photo by John Chaney) 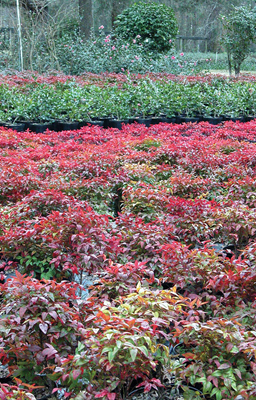 These are firepower nandina at Williams Nursery in Forest Hill, La. The green plants in the center are sasanque. (Photo by John Chaney)

These are woody ornamental plants at Southside Nursery near Forest Hill, La. The greenhouses in back are owned by Doug Young Nursery. (Photo by John Chaney) 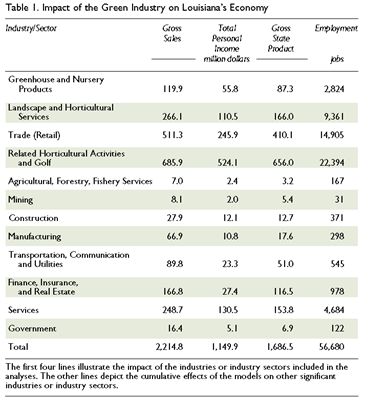 Impact of the Green Industry on Louisiana's Economy. According to the LSU AgCenter's Ag Summary, the nursery stock and ornamentals industry contributed $154.7 million, including value-added, to the state's economy in 2002.

Roger A. Hinson and Raul Pinel

Our society has a strong interest in the green industry, defined as the production, sale and maintenance of ornamental plants and their allied goods and services. During the 1990s, consumers’ incomes increased significantly for most demographic groups. They used some of this income to improve their homes, including lawns and gardens. The baby boom generation was a factor. People in this age group became more interested in home improvement activities like gardening, and they changed their lifestyles and consumption patterns accordingly. A National Gardening Association survey indicated that retail sales of plant materials and allied goods increased from $190.92 per household in 1995 to $408.82 in 2001. Also, the pace of new residential, commercial and public construction was rapid during the 1990s, another factor favorable to the industry.

Both nationally and in Louisiana, sales grew significantly in the producer and service sectors. From 1995 to 2001, Louisiana nursery sales increased from about $105 million to about $120 million. Sales by horticultural service firms, such as landscapers, increased from $146 million to $266 million over the same period. Some outlets for this production included landscaping new homes, maintenance and re-landscaping of existing properties, and installation and maintenance at public and commercial facilities. A thriving “interiorscape” industry addresses the needs of many retailers to improve the ambiance of their indoor spaces. The green industry also produces significant economic activity through job creation.

The impact of the green industry on Louisiana’s economy was estimated using an input/output approach with software called IMPLAN. This software includes a database with sales estimates for 525 industries at the national and state levels, as well as information about the value of inputs required to produce goods and services. For example, when $1 in product value is sold by a nurseryman, part of that dollar comes from purchased inputs such as chemicals, fertilizers, machinery and labor. IMPLAN’s most recent database at the time of the study was for 1999, but total sales for industries of interest were updated to 2001, when possible.

The IMPLAN software calculates economic impacts, which are assessments of changes in overall economic activity. These impacts can result from change either in one or in several specific industries or sectors of the economy, and they are commonly measured by gross sales, total personal income, gross state product and employment. The IMPLAN database combines standard industrial classifications of economic activity with the ability to aggregate results into useful summaries.Industries and sectors analyzed in the model were:

Producers. This included two IMPLAN industries. The first includes greenhouse, nursery and sod producers, also known as nurserymen, who grow the plants, including woody ornamentals, flowers, foliage, bedding plants and sod. The second includes landscape and horticultural services. These industries include the people who design, install and maintain landscapes.

Golf Industry. This is a major component of the green industry. All revenue and expense sources were included in sales estimates.

Related Horticultural Activities. This sector includes horticultural services within industries whose dominant output is something other than landscape installation and maintenance. Standard industrial classifications attribute all of an industry’s output to its major activity. But in the construction and real estate industries, for example, there are people employed for grounds maintenance responsibilities. Also, landscape activities by a variety of public and private institutions, such as churches, schools and other public agencies, are either contracted out or hired. The values of these activities were estimated from surveys.

IMPLAN’s data were customized to Louisiana when survey or secondary information – survey-based information from Louisiana, material in data collected for other purposes and published materials – provided a valid alternative.

Models were created for the four sectors, and an overall model combined the impact from all sources. Only the overall model is presented (Table 1). The overall impact of the green industry was estimated by categories. Gross sales ($2.21 billion) include the four sectors’ total impact on sales in all industries. Personal income ($1.15 billion) is the sum of employee compensation and proprietor income. Gross state product ($1.68 billion) adds other proprietary income and indirect business taxes to personal income. The green industry was responsible for 56,680 jobs in Louisiana.

The combination of related horticultural activities and golf had the largest impact on the Louisiana economy, followed by retail, landscape and horticultural services, and greenhouse and nursery products. The producers’ value was lowest; however, producers are important because of strong linkages to secondary impact sectors not reported here. In summary, the picture painted by this model suggests the production and services sectors have substantial impacts on other sectors.