Figures 2, 3 and 4 show how the presence of barnyardgrass affected rice yield and quality in herbicide-treated and non-herbicide-treated plots. All plots were 15 feet by 5 feet. The stink bug data were collected on multiple dates and averaged. Other plots with and without insecticide treatments were evaluated, but those data were not used for this article. 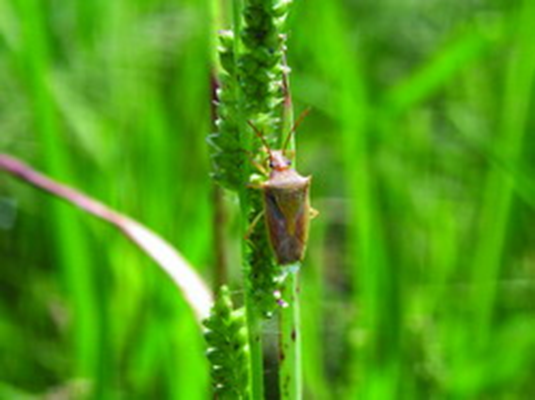 Figure 1. Rice stink bug feeding on barnyardgrass, a weed pest of rice and a preferred host for the rice stink bug. (Photo by Kelly Tindall) Weed and insect pests perpetually cause problems for Louisiana farmers. In addition to their individual effects, insects, weeds and their management practices can interact. Uncontrolled weeds can serve as alternate hosts for insect pests. Many insect pests of rice also feed on a broad range of other grasses, several of which are common weeds in rice fields. Additionally, cultural practices used for weed control can affect management of insect pests and vice versa. For example, flooding rice fields at the two-to-three-leaf stage to control red rice can increase the severity of damage by the rice water weevil, the most significant insect pest in south Louisiana. Conversely, delaying floods until the four-to-five-leaf stage allows the rice root system to become more tolerant to rice water weevil infestation, but compromises weed control.

Interactions between herbicides and insecticides may be toxic to plants and may require special consideration before pesticide applications are made. In rice, for example, injury can occur to plants when applications of certain insecticides (methyl parathion, malathion or carbaryl) are made within 15 days of application of the herbicide propanil.

An interdisciplinary team of LSU AgCenter scientists has been investigating these types of interactions among weeds, insects and pest management strategies in rice during the past three years at the Northeast, Macon Ridge and Rice research stations. Recent research has focused on interactions between rice stink bugs and barnyard-grass. Rice stink bugs feed on develop-ing grains, causing partially filled seeds, reduced milling quality and “pecky” rice – rice with discolored kernels. Also, rice stink bugs can reduce yield by feeding on flowers, causing them to become sterile.

Grain yields were reduced by more than 30 percent in the presence of barnyardgrass and rice stink bugs (Figure 3). Incidence of pecky rice was 30 percent higher in weedy plots than weed-free plots (Figure 4). These results show that barnyardgrass not only causes direct yield losses through competition with rice but also causes additional indirect losses (pecky rice) because of the higher numbers of rice stink bugs in barnyardgrass-infested plots.

Future research plans include further investigating the effects of the timing of barnyardgrass emergence and determining the influence weedy field borders can have on rice stink bug populations on rice.

Acknowledgment
This research was partially funded by the Louisiana Rice Research and Promotions Board.