Cormier combines his love of agriculture, concern for farmers and enthusiastic acceptance of technology in his work with rice and sugarcane farmers. “I just think answering their field calls is the most important thing I can do.”

Cormier points out a weed problem in a rice field farmed by Dwight Hardee of Gueydan. 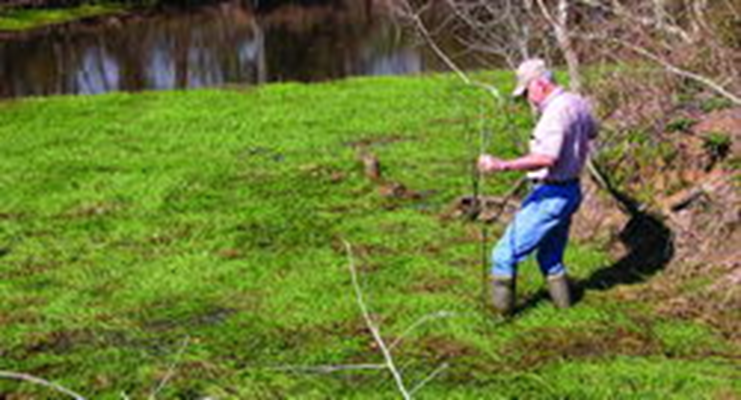 Howard Cormier, Vermilion Parish county agent for rice and sugar cane, examines the thickness of an infestation of Peruvian watergrass in an irrigation canal. Cormier made the inspection of the invasive species after getting a call from a farmer.

Howard Cormier, county agent for rice and sugarcane in Vermilion Parish, waded into a rice field near Gueydan to get a firsthand look at weeds in the fledgling crop.

Cormier continued to tell farmer Dwight Hardee of the possible strategy for dealing with the weed assault.

But Cormier had to admit he didn’t have a quick answer for dealing with one weed species flourishing in Hardee’s fields.

Cormier sees his job as a conduit for passing along information developed out of research. Cormier said farmers don’t always take his recommendations, but they trust that the advice disseminated by the LSU AgCenter is unbiased.

“Our underlying goal is to make money for the farmers,” he said. “I just think answering their field calls is the most important thing I can do. I really hate to put off a farmer when I can’t go.”

And he’s also troubled when he and other AgCenter representatives can’t provide a solution to a farmer’s problem.

“It is frustrating when no one has the answer,” he said.

On the other hand, he said, it’s the new problems that make the job interesting.

“Like today, I’ve never seen that weed out in the field like that. This situation has not come up before.”

Cormier grew up near Church Point. He earned his animal science degree at the University of Southwestern Louisiana in Lafayette, then attended seminary for a year.

After deciding the priesthood wasn’t for him, Cormier began his career as a 4-H agent in Lafourche Parish. He moved to Vermilion Parish in 1978 to become the 4-H agent there.

He looks back fondly on his work in 4-H. He still gets satisfaction from knowing that many of his former students are now productive citizens.

Cormier said he took pride in his work, helping many kids win blue ribbons, especially with white Brahma cattle. He felt it was his responsibility to teach youngsters to do their best with what they had.

“My upbringing made me identify with a lot of 4-H kids who could not afford the highest priced animals,” he said. “I never saw the value in spending large amounts of money on an animal because the animal becomes more important than the child.”

Then fate stepped in and changed Cormier’s future.

The previous Vermilion Parish county agent for rice and sugarcane, Cecil McCrory, died in an accident in January 1993. Cormier, who gave the eulogy for McCrory’s funeral, considers him a mentor.

“He had the heart of a real man,” Cormier said. “He definitely is someone I think about often.”

McCrory grew up in the rice fields and seemed to have a sixth sense about what a crop needed, Cormier said, and his legacy continues.

“I still try to think of him when I make decisions,” Cormier said.

Cormier said he had to learn not to get in a hurry when he started working with farmers, and he recalled McCrory often asked him, “You were really efficient, but were you effective?”

He started out as a county agent for rice and sugarcane by simply connecting farmers with LSU AgCenter experts.

“I did the mechanics of the work, but it took a long time before I felt comfortable with the technical questions,” he said.

He recalled he didn’t even have a pair of rubber boots on his first visit with a rice farmer, who turned out to be Hardee.

At one time, he said, farmers who found a weed in their fields had to mail a pressed sample to LSU AgCenter labs in Baton Rouge before a recommendation would be made. But all that has changed with today’s technology of cell phones, computers and the Internet.

I understand they are in a rush and they’ve got to work in fairly narrow windows,” Cormier said. “Their crop is on the line.”

Paul Coreil, LSU AgCenter vice chancellor for extension, said county agents are on the front lines, acting as the liaison between research and application in the field, and technology is essential to pass along research results quickly.

Cormier has used technology to get information into farmers’ hands immediately through a vast e-mail network, Coreil said.

Cormier relies heavily on the Internet and PowerPoint to get information where it’s needed. En route to a farmer’s request for help, he works his cellular telephone like an air traffic controller to line up more appointments and to get answers from previous inquiries.

Cormier has helped cane farmers develop harvesting techniques to reduce complaints from the public about debris on roadways and air quality. “Cane farmers are really making an effort and it’s just a matter of doing it voluntarily,” he said.

He also works with “Operation Quackback” to improve waterfowl hunting in the coastal marshes and has been a driving force behind the LSU AgCenter’s new Master Horesman program to pass along equestrian skills.

“I do it out of a sense of commitment,” he said.

“We’re fortunate in Vermilion Parish to have a man as devoted as Howard,” Broussard said. “He’ll walk farmers’ fields like they’re his fields. He wants to solve the problems for you.”

It’s not just folks in Vermilion Parish who feel that way. Cormier received the national Rice Industry Award in 2002 for his work.

Linda Zaunbrecher, who farms rice with her husband, Wayne, near Gueydan, said Cormier is an agricultural icon in Vermilion Parish.

“He’s a very special agent,” she said. “We’ve worked him for a long time. We wouldn’t trade him with anybody.

“I can always count on him. He’s very precise and very detailed,” she said. “His work ethic is old school, and I appreciate it.”