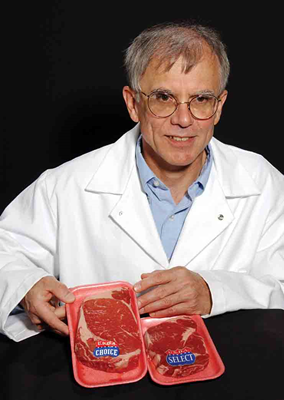 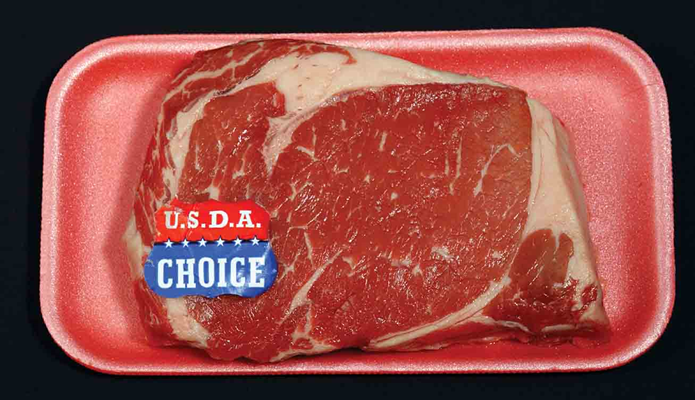 The cut of meat labeled “choice” has more marbling than the “select” cut and thus should taste more tender. Grading meat is subjective, and consumers may find both cuts of meat equally tender. (Photo by Mark Claesgens)

Tenderness is a major determinant of our enjoyment in eating beef and is based on two factors, said Kenneth McMillin, professor of meat science in the Department of Animal Sciences. Connective tissue, which changes with an animal’s age and type of muscle, is a primary factor, while physical attributes, including the length of the muscle fibers and their relative density also affect tenderness.

For more than 80 years, the U.S. Department of Agriculture has used a system of beef quality grading to classify beef carcasses and cuts into groups with similar characteristics. Over time, the quality grades have been associated with expected palatability or eating satisfaction.

The grades were originally established to classify cuts of meat to facilitate trade among packers, McMillin said. Beef packers in different parts of the country could buy and sell carcasses and cuts and be assured the meat met a specific standard.

“Relative animal maturity and amount of marbling – the flecks of fat in the meat – are subjectively evaluated to result in a quality grade,” McMillin said. “It’s a system developed and operated by an objective government agency, the USDA Agricultural Marketing Service.”

When the USDA grading system was first established, cattle often went to market when they were several years old, so maturity was a significant measure of the quality of meat the animal would produce. Today, however, beef cattle are sent to market young enough so maturity is less a factor in grading.

“About 85 percent of beef is graded, according to USDA records,” McMillin said. “More than 95 percent of retail beef is from known young animals – they’re going to be relatively tender – so the quality grade is highly dependent upon marbling.

“It’s easier to bite through flecks of fat, which also give juiciness and flavor,” the meat scientist said. “Marbling estimates the eating characteristics of the meat. It doesn’t estimate tenderness per se. Measuring tenderness requires cooking the meat and then evaluating it with an instrument or actual chewing by an individual.”

Three of the several USDA beef quality grades – prime, choice and select – are most common in retail trade. About 3 percent of beef grades prime and is sold mostly through high-end restaurants, while the choice or select cuts find their way to grocery stores and butcher shops.

With current emphasis on leaner beef, consumers are willing to buy select cuts if they believe the meat will be tender and juicy. McMillin said we can either produce cattle that will result in tender beef or measure the meat after the beef is butchered to separate it into tender and less-tender groups.

“The quality grading system really doesn’t predict tenderness at all,” McMillin said. “The current system measures marbling, so steaks from two of every 10 cattle may still not deliver acceptable tenderness.”

McMillin said LSU AgCenter research in identifying sires that will produce offspring with tender beef will help advance the industry by eliminating undesirable cattle from the beef system and reducing the current variation in beef tenderness.

(This article appeared in the summer 2004 issue of Louisiana Agriculture.)