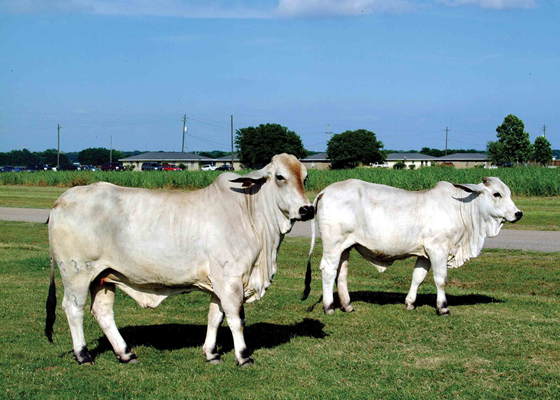 The Brahman at right is a clone of the other and produced at the LSU AgCenter’s Embryo Biotechnology Laboratory. The Brahman breed has contributed much to the commercial cow-calf industry in Louisiana because of its adaptability to subtropical conditions. (Photo by Mark Claesgens) 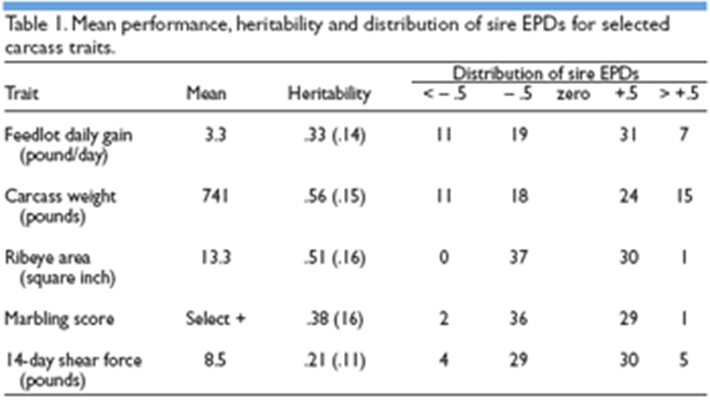 The Brahman breed has contributed much to the commercial cow-calf industry in Louisiana and the South-eastern United States because of its adaptability to subtropical conditions. The breed also contributes to hybrid vigor when crossed with Angus and Hereford breeds. Recent evidence suggests that beef from cattle with a high percentage Brahman parentage has lower marbling and is less tender on average than beef from other breeds. This has led the cattle industry to impose discounts ranging up to 15 percent on feeder steers and heifers that show high Brahman inheritance.

Four hundred forty-five purebred Brahman bull calves with known pedigrees and sired by 68 Brahman bulls were studied. The calves were purchased at weaning from private Brahman breeders in Louisiana from 1996 through 2000. The number of calves per sire ranged from 2 to 27.

Calves were collected in Baton Rouge and cared for in typical fashion until ryegrass was available for grazing around December 1. The steers were grazed for 100 to 140 days and then shipped to a commercial feedlot in south Texas. When about half the steers reached acceptable market weight and averaged .4 inch fat thickness, they were sold to a major packer for slaughter and data collection. The remaining steers were harvested when they were ready for market.

After the steers were butchered, the carcasses were chilled for 24 hours before data collection. A primal rib was cut from each steer and sent to the LSU AgCenter Animal Science Department’s meats section for tenderness evaluation. A steak was cut from each primal rib and aged for 14 days. Steaks were cooked to a medium doneness and allowed to cool to room temperature. Six half-inch cores were taken from each steak parallel to muscle fibers. Each core was sheared in a device that measures the force necessary to cut the meat. The six shear force measurements were averaged to determine tenderness for each steak.

In addition, other traits were evaluated using software known as Multiple Trait Derivative Free Restrict-ed Maximum Likelihood. This proce-dure estimated the additive genetic variance components and the heritability for each trait and predicted values for the individual sires.

Carcass weight at harvest averaged 741 pounds – about the middle of the recommended range of weights for feedlot cattle.

The average ribeye area of 13.3 square inches met industry standards. The 1.8 square inches of ribeye per 100 pounds of carcass indicated these Brahman steers had adequate muscling relative to carcass weight.

Average shear force of 14-day-aged steaks was 8.5 pounds. The National Cattlemen’s Beef Association Beef Board suggests that steaks should shear less than 9 pounds to be considered tender enough for sale in retail meat markets.

Heritability, a measure of genetic variation, is defined as the proportion of observed variation in a trait due to addi-tive genetic influence. Additive genetic influence comes from the cumulative small effects of all the genes that influence a trait in an individual. Heritability estimates for carcass weight and ribeye area were above 50 percent and are considered in the high range. This means that beef cattle producers can make rapid changes in these traits by selecting sires that display those traits.

The heritability estimate for daily gain was 33 percent and the estimate
for marbling was 38 percent. These estimates are in the high end of the moderate range and indicate that change is possible through selection.

The heritability of shear force of 14-day-aged steaks was 21 percent, in the low end of the moderate range. One of the problems in improving tenderness is that you cannot measure tenderness on a live animal. Tenderness is meas-ured on harvested beef. The recom-mended procedure is to evaluate progeny of sires and then select the sire that had progeny with low shear-force values. It takes a long time to progeny test beef cattle for carcass traits, and the process is expensive.

A sire will transmit a random selection of half its breeding value for
a trait because only half the genes of an individual are transmitted from parent to offspring. The amount of genetic merit transmitted is called Expected Progeny Difference (EPD) and is one-half of the sire’s breeding value. The distribution of sire breeding values is given in Table 1.

These results confirm that genetic variation in the Brahman breed for carcass and tenderness traits is similar to that found in other breeds. These results have also led to the development of a steer feed-out program administered by the American Brahman Breeders Association to develop EPDs for carcass and tenderness traits for sires in the Brahman breed.

(This article was published in the summer 2004 issue of Louisiana Agriculture.)