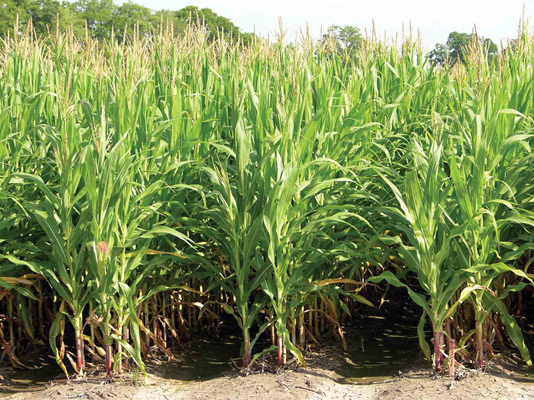 Scientists at the Northeast Research Station are conducting studies on dual-row planting of corn, grain sorghum and soybeans. The dual-row system could offer solutions to several problems. Narrow rows canopy faster but are more susceptible to waterlogging. (Photo by Linda Benedict) 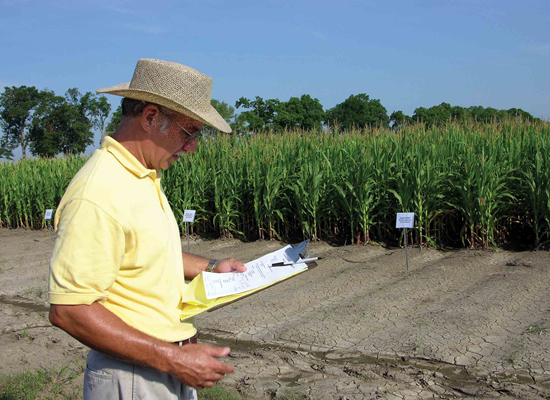 One of the newest research projects at the Northeast Research Station near St. Joseph involves comparing yields from dual-row corn to corn planted in single rows, the traditional method. Rick Mascagni told farmers gathered for the annual field day at the station on June 13, 2004, that the project involves different seeding rates and nitrogen rates. (Photo by Linda Benedict)

Corn yield and seed quality depend on management, climate and the interaction of these factors. In Louisiana in recent years, lack of rain combined with high temperatures have caused yields to suffer. Successful, non-irrigated corn production should include optimum plant population and proper hybrid selection. Excess plant population may increase the rate of soil moisture depletion, reduce yield potential and increase risks from aflatoxin contamination of the grain.

Hybrid characteristics such as drought tolerance and ear type are two traits that interact with plant population. Ear type can be determinate (ear size is fixed), indeterminate (ear size varies) or some variation of the two. Indeterminate or flex-ear hybrids have the ability to adjust ear size depending on growing conditions. Therefore, fewer plants are required for maximum yield compared to fixed-ear hybrids. More importantly, fewer plants need less soil water. This is important in dry years, particularly on drought-prone soils, where yield potential may be reduced and risks from aflatoxin contamination increase. Planting flex-ear hybrids at relatively low plant populations may be the best production strategy.

Field experiments were conducted in 2000 on a Tensas/Alligator clay at the Louisiana Delta Plantation near Jonesville, La., and in 2001-2003 on Sharkey clay at the Northeast Research Station near St. Joseph, La., to evaluate the influence of irrigation, hybrid and seeding rate on yield and optimum plant population.

These findings suggest that when yield expectations are high, optimum plant populations are about 30,000 plants per acre regardless of hybrid type (fixed- versus flex-ear). In situations with lower yield expectations, however, fewer plants may be required for maximum yield, particularly when planting a flex-ear type hybrid. In these cases, producers can reduce seed cost by planting fewer seeds per acre.

(This article was published in the summer 2004 issue of Louisiana Agriculture.)