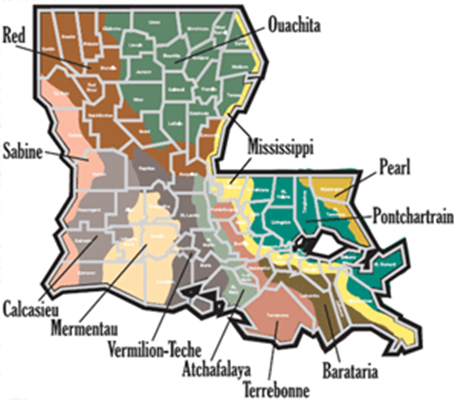 Louisiana’s 12 Drainage BasinsWatersheds are also referred to as drainage areas or river basins and are comprised of the land area that directs and then drains rainfall and other forms of precipitation through a particular river system or systems. Louisiana is divided into 12 watersheds or drainage basins.

Because of the importance of environmental issues in Louisiana, the LSU AgCenter created a Watershed Education Initiative in 2001. Several extension faculty members were reassigned as watershed educators, and in 2002, the program was launched to assist in the conservation and restoration of the state’s aquatic ecosystems and protection of human health. The program’s basic organizational premises are that most water quality and related problems are best solved at the watershed level and that, by definition, watersheds do not conform to any political boundaries, such as parishes or states. We share several watersheds with our neighboring states of Mississippi, Arkansas and Texas and even beyond their borders.

Watersheds are also referred to as drainage areas or river basins and are comprised of the land area that directs and then drains rainfall and other forms of precipitation through a particular river system or systems. On a national scale, managing water resource programs on a watershed basis makes good sense – environmentally, financially and socially. Louisiana has 12 major watersheds or river basins composed of several hundred smaller sub-watersheds. The Ouachita and Red River basins, for instance, are consid-ered major ones that drain numerous smaller tributary rivers and bayous that eventually flow into the Mississippi River system above Baton Rouge. In fact, the Mississippi River has the world’s second largest drainage basin, encompassing 48 percent of the mainland United States. Waters from 30 states and two Canadian provinces pass through our state as they drain to the Gulf of Mexico through the Mississippi River system.

Unfortunately, more than 350 stream segments in Louisiana have been listed as impaired, meaning that the waters do not meet certain quality standards set by the state. As a consequence, Louisiana is establishing so-called TMDLs or Total Maximum Daily Loads that will set a maximum amount of a pollutant that each water body can receive and still meet water quality standards.

To solve the water quality problems in our streams, the amount of point- and nonpoint-source pollutants that enter Louisiana’s waters must be reduced. Point-source pollutants are those collected in and discharged through pipes, such as sewage treatment plants, and the effluents from food processing operations. More problematic and complex to solve are the nonpoint sources of water pollution, that is the pollution that originates from human land uses, including runoff from urbanized areas, poor forest and agricultural management practices, failing septic systems and discharges from boats.

The primary charge of the watershed educators is to deliver educational programs on nonpoint water quality issues. Since the outset, these educators have conveyed information to numerous audiences on how watersheds function and how water and pollutants move through them. As with all extension efforts, these educators promote a high level of key stakeholder involvement and actively work at integrating solutions that make use of the expertise and authority of government agencies.

Considering the magnitude of the overall challenge, all watershed educators use a comprehensive and focused educational approach that targets specific priority areas and groups within the watersheds. The educational campaigns have initially targeted several audiences, notably agricultural and aquacultural producers, marinas and recreational boaters, municipal and parish officials and planners, business and industry, rural and urban residents, and youth. Watershed educators have, for example, worked closely with the Louisiana Master Farmer and Master Cattle Grower certification programs. They provide a classroom-style environmental stewardship training for the participating producers which entails an overview of the environ-mental regulatory climate, and informa-tion on how the agricultural community and society at large can benefit from good stewardship practices.

Another example of LSU AgCenter involvement in nonpoint water quality education is in the Lake Pontchartrain Basin, where land use changes are taking place at a breakneck pace, and agricultural lands are being converted to urban uses such as residential and commercial centers. Over the years, the area’s population has grown faster than that of any other part of the state, and part of the region’s appeal is its easy access to lakes Pontchartrain and Maurepas and their tributaries. The region has become a recreational boating mecca, and boaters and the facilities that serve their needs also contribute to nonpoint source pollution. A watershed educator in the area helps the recreational boating community, including marinas, boat launch and boatyard operators, improve environ-mental practices that will reduce any contribution to the basin’s overall pollution problem.

Environmental stewardship education for youth groups has been the focus of several watershed educators. Several thousand young Louisianians have received water education at 4-H and environmental camps, weekend sessions, special events and club meetings. Special summer programs such as “Wild Woods Wandering” in the Tensas River Basin, “Marsh Maneuvers” in coastal Louisiana, and “4-H Summer Camp” in the lower Red River near Pollock have provided in-depth water quality education to future leaders from throughout the state.

Watershed educators also verify the effectiveness of certain agricultural best management practices. For instance, a project is under way in the Mermentau Basin to compare the quality of the water discharged from rice fields managed in different ways. Some use the traditional way of seeding by air over flooded fields. Others are seeded on dry land.

Municipal and parish governments are also an important audience for watershed educators. Geographic Information System (GIS) technology is being used in the Calcasieu River and Vermilion-Teche river basins to advise local governments regarding urban land use effects on water quality, and how agricultural and aquacultural land use practices can help reduce pollutant inputs. Two watershed educators are implementing a Louisiana NEMO program, an acronym for the Nonpoint Education for Municipal Officials program established at the University of Connecticut in the early 1990s.

The LSU AgCenter’s watershed education program is a relatively recent initiative designed to help address Louisiana’s environmental challenges, specifically those that relate to water quality. Most of the attention will continue to be devoted to the priority contributors of nonpoint sources. Although there are some distinct differences among the watersheds, overall the most significant contributors in our state can be categorized under agricultural, forestry and municipal sources. In coastal areas, households and boating and navigation-related services and activities can also contribute significantly to the problem.
The LSU AgCenter’s watershed educators are helping build a stronger foundation for addressing the many stressors that affect the state’s watersheds and ultimately hope to contribute to the protection or restoration of resources for the future.

(This article appeared in the spring 2004 issue of Louisiana Agriculture.)