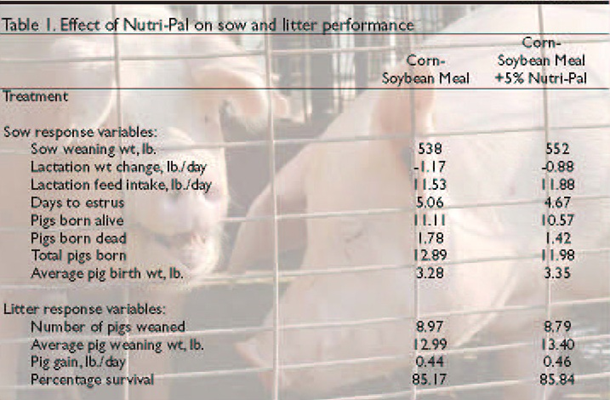 The 2003 agricultural statistics from the U.S. Department of Agriculture indicate that litter size per sow has increased over the past decade. As litter size increases, the sow must increase milk production so that the baby pigs can maintain a healthy growth rate. To produce milk, the sow must use a combination of nutrients derived from her diet and from the fat and protein stores in her body. As the demand for milk production increases, the sow mobilizes more of her body stores, which often results in a loss of body condition. If this loss of body condition is significant, her performance during this or subsequent lactations – the time when she produces milk – and her return to estrus – the breeding period – could be delayed. This in turn delays her rebreeding and subsequent birthing. The penalty for loss of performance during lactation or delayed estrus is decreased pig growth, potentially increased sow and pig mortality, and decreased litters produced per year. All of these penalties ultimately result in a loss of income to the producer.

A possible way, and perhaps the only way, to overcome the loss of body condition is to increase feed intake of the sow during lactation. This increase in feed intake would minimize the loss of body condition because the sow would use less of her body stores to maintain milk production. Currently, no available information demonstrates an increased feed intake to parallel the increase in litter size in sows. The purpose of our research was to investigate a highly digestible carbohydrate and protein ingredient called Nutri-Pal, which is manufactured by International Ingredients Corp., to determine if dietary supplementation with this product would increase feed intake of the sow and subsequently affect sow or litter performance.

Sow weaning weight and feed intake were increased and days to estrus were decreased in sows fed Nutri-Pal. Thus, our data combined with more recently published data, suggest that highly digestible protein and carbohydrate sources, such as Nutri-Pal, will improve sow productivity.