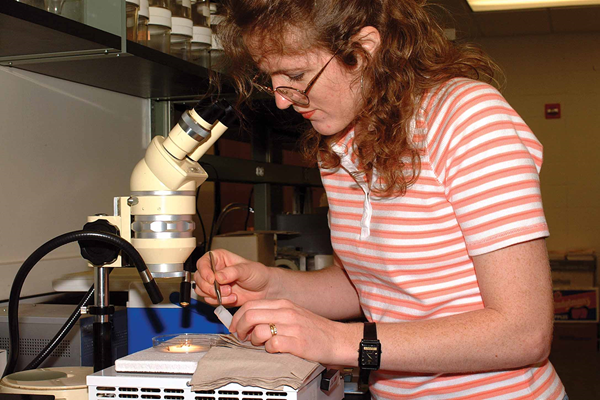 Byrel Book, a Beauregard Parish police juror, started out as a skeptic at a West Nile virus/mosquito control workshop in Crowley, one of eight sessions held around the state sponsored by the LSU AgCenter this past April and May.

When the session ended, though, Book said he was convinced of the need to seek funds to help fight the threat of the mosquito-borne virus. The virus first appeared in Louisiana just two years ago. But no one expects it to disappear any time soon.

In 2002, Louisiana had 329 confirmed cases of West Nile virus in humans, and health officials expected the disease to be a serious threat again in 2003. Nationally, more than 4,000 people were infected in 2002, with the most serious cases affecting the elderly and people with other health problems.

“I’m sure we’re not the only parish government considering it,” said Book, when asked about the possibility of applying for a share of $500,000 in state and federal money available through Louisiana’s Department of Health and Hospitals/Office of Public Health.

The funds were made available to parishes that don’t yet have a mosquito control district. Book represents one of the 44 parishes in Louisiana without a district, an alarming statistic that led the LSU AgCenter to hold the workshop series.

The goal of the workshops was to show local officials how to set up affordable mosquito control programs to fight the Asian tiger and southern house mosquitoes, the two types considered the biggest threats to infecting humans with West Nile, a mosquito-borne virus that can cause meningitis and encephalitis.

AgCenter economist Kurt Guidry outlined how mosquito budgets can be adjusted to fit the money available. “One size budget does not fit all communities,” Guidry said.

The all-day sessions gave parish officials across Louisiana a blueprint for starting a mosquito control district, an endeavor that could cost each locale $500,000 to $1 million a year, depending on personnel costs and equipment.

But the message was this: Get started with a program you can afford and then build from there.

“When I worked in mosquito control in East Texas, we had a small crew of four or five people, but we covered a large area and everyone did what they could to get the job done. Sometimes I drove the spray truck,” said Lucas Terracina, who today oversees mosquito control in Calcasieu Parish.

Terracina’s parish has a model mosquito control program. Work crews check rural traps for the presence of mosquitoes, and other staff members evaluate when and where to spray to stop adults in mid-flight or kill mosquito larvae.

AgCenter specialists and other mosquito fighters around the state say mosquito control is more than just spraying. It’s knowing when, where and what to spray.

“Spray only when you need to,” said Matthew Yates, head of East Baton Rouge Parish’s mosquito and rodent control program. Yates appeared at several of the workshops.

Yates recommends teaching adults and children how to clear standing water from around their homes to eliminate mosquito breeding grounds and reduce the threat of disease.

“Take advantage of every media opportunity. Put your message in subdivision newsletters. People read those more than the daily newspaper sometimes. Set up mosquito control booths at festivals and fairs. Get involved in school science fairs and ask teachers to include lesson plans on fighting mosquitoes in their classroom instruction,” Yates said.

AgCenter officials and other experts said some state and federal funds should be available for start-up costs, but the bottom line is that a full-fledged attack on mosquitoes will require local tax revenue to help finance any meaningful control efforts.

“These sessions are stimulating some interest,” added Terracina. “It’s a question of how much you can afford locally.”

“Our experience with disease outbreaks the past few years makes it clear that we need to do something to address the potential threat of even more serious mosquito-borne diseases,” said David Boethel, the LSU AgCenter’s associate vice chancellor who is coordinating research and educational efforts aimed at mosquito control. “That’s why we have worked to develop strategies and plans for mosquito abatement.

“We’re not here to say you have to do this,” Boethel told officials at the workshops. “We’re here to work with you in case you have an interest.”

The West Nile virus is transmitted from birds to humans and other animals by a number of species of mosquitoes, but primarily by the southern house and Asian tiger mosquitoes. Both species live near homes. The southern house mosquito commonly breeds in water high in organic matter such as drainage ditches and oxidation ponds. Asian tiger mosquitoes deposit eggs in fresh water commonly trapped in flower pots, gutters, trash dumps, abandoned tires along the roadside and other containers.

The average abatement district in Louisiana spends $1.4 million a year on mosquito control today, said Guidry, but that figure includes some of the more populated areas with well-established programs. East Baton Rouge Parish, for example, spends $2 million a year.

Some local officials who attended the all-day seminar in Crowley in mid-May said at the time that they were a bit confused by the state paperwork and fast-approaching deadlines to qualify for a share of federal funds funneled through the state Office of Public Health. But several planned to rush through applications for the money anyway, and then fine-tune their budgets before signing a final contract with the state in June.

“We’re trying everything we can. Last year, we spent $200,000 in one-time (public health) money on spraying (in Acadia). But to do more, it’s going to take more parish support,” Quebodeaux said.

Acadia Parish had a one-quarter-cent sales tax proposition on its election ballot in July to pay for mosquito control outside the city limits of Crowley and Rayne. A parishwide half-cent sales tax failed last year. The quarter-cent tax would raise an estimated $400,000 to $600,000 a year, Quebodeaux said.

“If we could start with $400,000 to $600,000, it would be something. That would give us a start, and if the people were satisfied, we could consider expanding from there in another two years.”

“Louisiana has a subtropical climate, the preferred climate for mosquitoes,” AgCenter medical entomologist Michael Perich said. “And we even have some mosquito species that are more active during the period from October through April than they are during the summer months.”

It is important to protect yourself from mosquito bites at all times of the year, he said. “West Nile is not going away,” Perich added.

Others warned that West Nile isn’t the only threat. “West Nile probably won’t be our last epidemic,” said Yates of East Baton Rouge Parish. “The next threat is just a plane ride away. New mosquito varieties are easily transported into the United States, and mosquitoes don’t recognize political boundaries.”