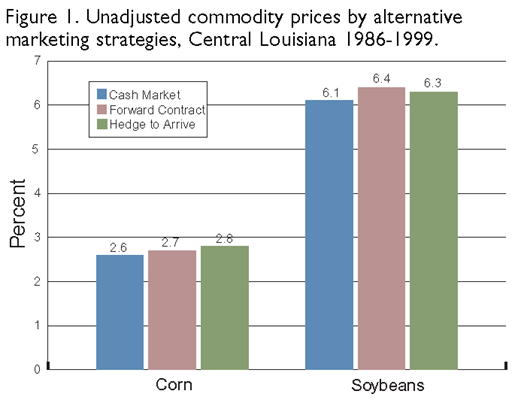 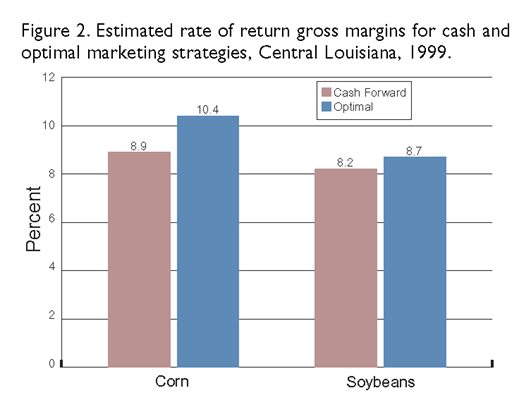 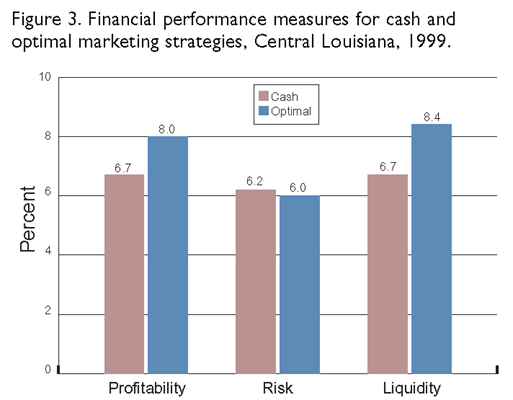 Changing economic variables and business conditions increase the need to manage farm income and risk. Financial performance is measured in terms of profitability, risk and the ability of the business to pay bills on time (liquidity). Farmers can increase their profits by using selected pre-harvest marketing strategies instead of selling in the cash market at harvest.

To illustrate the differences that pre-harvest marketing strategies can make, the following comparisons were made based on a representative grain farm in central Louisiana that includes 1,000 acres where corn and soybeans are produced. An optimal marketing pre-harvest strategy estimated from an economic model is compared to a typical cash marketing situation.

The Louisiana Farm Bureau Marketing Service, along with Louisiana Cooperative Extension personnel, was used to select three pre-harvest marketing strategies. These strategies were:

Sell in cash market at harvest—still the most popular method in Louisiana. The producer gets whatever price is offered at harvest.

Initiate a pre-harvest forward price contract—becoming more popular in Louisiana. The producer locks in a price before harvest.

Use a pre-harvest hedge-to-arrive price contract—also becoming more popular. The producer locks in a price based on the futures market, but there is still time before harvest to go up or down with the final, total price.

Representative Farm
The representative farm in this study included a capital structure of $666,841 in equity capital and $422,159 of debt capital. Government payments were estimated at $65,340. In addition to enterprise production expenses, which were used in estimating the rate of returns to assets, other expenses included farm overhead of $26,900, operating interest of $5,445 and family living costs of $25,000. The interest rate was 9 percent, and the income tax rate 20 percent.

The results suggest that the hedge-to-arrive contract best fits the corn enterprise, while the forward contract is estimated for soybeans. The optimal marketing portfolio for corn includes 24 percent cash and 76 percent hedge-to-arrive marketing strategies. The optimal marketing portfolio for soybeans includes 37 percent cash and 63 percent forward contract marketing strategies. Selling minimal amounts of each enterprise in the cash market for each optimal portfolio reflects modeling constraints for not contracting more of the commodity than can be produced in any given year.

The results also indicate that different pre-harvest marketing strategies affected profitability, risk and liquidity on the representative farm. Both profitability and liquidity were higher for the optimal marketing scenario than for the cash marketing scenario. Similarly, the results indicate opportunities for improved farm risk management. Marketing the crops at harvest in the cash market has the highest level of risk. Moreover, if a portfolio of pre-harvest forward price contracts along with the cash market are used, the farm was able to meet all of its financial commitments within its desired limits of probability (nine of 10 years). These results illustrate a direct relationship between marketing strategies and financial performance. Improved marketing is expected to provide more and better opportunities for risk and financial management within the farm firm.

(This article appeared in the summer 2003 issue of Louisiana Agriculture.)