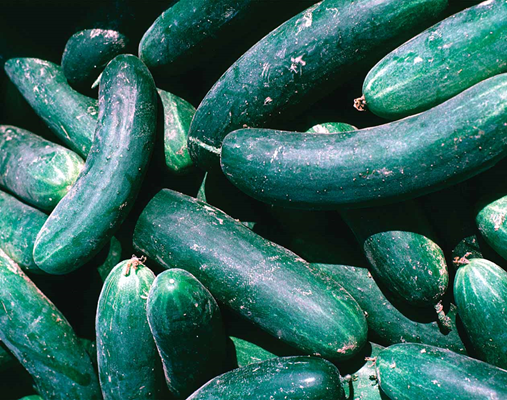 Root-knot nematode can cause significant losses in cucumber yield if not treated with nematicides. Considerable effort has been made to breed for nematode resistance in vegetable crops and was successful in tomatoes but not in cucumbers. Tomato cultivars resistant to root-knot nematodes have been developed and are an effective means of reducing tomato losses from this pest. Additional benefits include a residual effect that remains in the soil and protects following crops from nematode damage.

The spring tomato crop in most southern states is transplanted in late March or early April on polyethylene-mulched and drip-irrigated beds and terminated in late June or early July. Producing a second short-season crop such as cucumbers following tomatoes on these beds is feasible and may help tomato growers increase their profits by using the irrigation and mulch system already in place.

It is not known how long the residual beneficial effect of tomatoes will remain in the soil after terminating a nematode-resistant tomato crop. LSU AgCenter researchers conducted a study to evaluate cucumber yield planted at three dates, separated by one month each, following the termination of nematode-resistant and susceptible tomato cultivars.

Celebrity (nematode-resistant) and Heatwave (nematode-susceptible) tomato cultivars were transplanted on polyethylene-mulched and drip-irrigated beds in early April 1995 and 1996. Following the last harvest of tomatoes in late June, plots were sprayed with glyphosate to kill tomato plants and other existing vegetation. Beds were cleared of plant debris and remained fallow for zero, one and two months before planting cucumbers as a second crop.

The increased percentage of galled roots as the time of planting cucumbers was delayed beyond July was a good indication that cucumber protection offered by the previous nematode-resistant tomato crop was weakening. The increase in galled roots may have reduced cucumber growth and yield. Also, late planting may have subjected cucumbers to undesirable lower night temperatures that contributed to lower yields.

The results of this study indicate that double-cropping cucumbers with a nematode-resistant tomato variety can be an effective method to improve cucumber yields in soils that have a history of root-knot nematode infestation. Tomato growers are encouraged to consider the numerous benefits of planting cucumbers as a second crop following nematode-resistant tomatoes in soils susceptible to nematode infestation. Benefits include improving cucumber yield without chemical control and reduced overhead costs by using the polyethylene mulch, drip irrigation and trellising system for both crops. Residual fertilizer left in the soil after the termination of tomato harvest can be used by the cucumber crop and reduces the need for additional application. Cucumber growers should make every effort to plant cucumbers following nematode-resistant tomatoes as early as possible in July to maximize cucumber yields.