Cattlemen Pleased with Cloned Calf, Thanks to LSU AgCenter Research 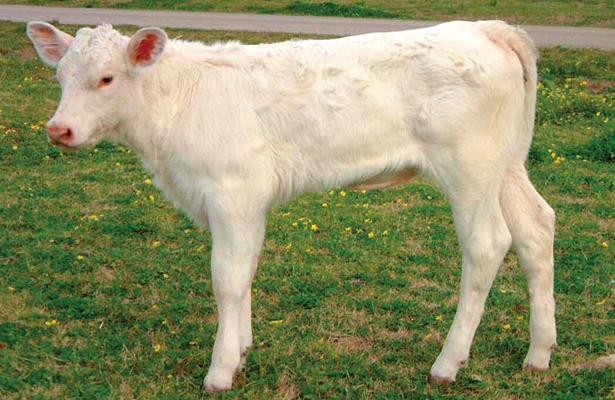 “Yuki” is a cloned calf produced at the LSU AgCenter’s Embryo Biotechnology Laboratory as part of the reproductive physiology research program. She is a Charolais and looks exactly like her donor, according to owner David Pattridge, a rancher in Benton, La. Yuki, which is Japanese for snow, is about 2 months old in this photo. She was produced by Masao Murakami, postdoctoral researcher under the direction of Robert Godke, Boyd Professor and project leader on this research. (Photo by Robert Godke)

Though Dolly the famous Scottish sheep is no longer with us, the promise of cloning as another tool in the quest to produce perfect livestock animals remains strong. The LSU AgCenter just had a successful experience in cloning a genetically valuable cow. And the owner, Louisiana rancher David Pattridge, is pleased.

In 1997, Dolly was the world’s first clone produced from the cells of an adult animal. She was euthanized in February 2003 because of a progressive lung disease.

“There are a lot of unknowns with animal cloning,” said Richard Denniston, director of the LSU AgCenter’s Embryo Biotechnology Laboratory. “This is still a developing science with no guarantees.”

In the livestock industry, cloning is looked upon as the next step in reproducing profitable animals. Pattridge of Benton, La., wanted a clone of one of his best and most expensive Charolais cows.

“She’s a high-yielding, milk-producing beef cow,” Pattridge said of the 11-year-old animal, whose initial purchase price was $20,000, which is top dollar in the world of specialty breed cattle. Her registered name is GS “Lacey” 2201 ET. The ET stands for embryo transfer, which means she started out as an embryo transplanted into a surrogate mother. This would make the calf a clone of an ET-produced cow, a double technological accomplishment.

“This cloning was his idea,” David said of his son and business partner, Paul, who in the fall of 1999 was a student in an LSU animal science class where he first heard specifics about cloning. Denniston was a guest speaker in the class.
“I brought my dad to Baton Rouge to talk about the possibilities of trying this in our business,” Paul said. “He had no hesitation.”

The Pattridges have a 200-acre ranch in Louisiana and a 1,600-acre spread in Mansfield, Mo., where they maintain about 200 head of Charolais and 150 head of commercial cattle, not counting calves. The business is called Oakwater Ranch. Paul now resides in Missouri where both “Lacey” and her clone are too.
The ranchers and the researchers had to work out an arrangement mutually agreeable, considering all the risks.

“We were interested in working with the private producers of our state,” Denniston said. “But this was still part of our ongoing research and not a service we were selling.”

The few companies in the world that offer a cloning service charge high fees—something in the neighborhood of $25,000 for a cow, for example.

“This new technology is being developed primarily at university laboratories,” Denniston said. “It’s still inefficient, and its success depends on many factors still unknown.”

After the final agreement on ownership of the offspring was made, the cloning process began. The first step was for a local veterinarian to take skin cells from the animal to be cloned, following strict procedures, and ship them to Lazaron BioTechnologies, a company in Baton Rouge with the capability of cryo-preserving the cells. This means storing the cells at an extremely low temperature where, in theory, they can be preserved forever.

Then comes the tedious process of trying to create embryos with micro-instruments under a high-power microscope. Sometimes it takes hundreds of tries to get one to work.

Embryos are then transplanted into surrogate mothers, and everyone waits to see if it’s a successful pregnancy. In this case, the project was undertaken by an animal scientist from Japan, Masao Murakami, who was doing post-doctoral research under the direction of Robert Godke, Boyd Professor and project leader on this research. A successful conception occurred after eight months. Murakami has since returned to Japan.

“He worked on the project during his two years of study with us,” Denniston said.

Then, on February 8, 2002, Lacey’s clone was born, weighing a little over 100 pounds. Murakami nicknamed her “Yuki,” which is Japanese for snow. And so far, so good. David came to pick her up from the LSU AgCenter facility on March 27, 2003, and transported her to Benton, where Paul saw her for the first time.

“I’ve known her donor since she was about five years old. The calf looks a lot like her and seems to have the same characteristics. We’re very impressed with the whole procedure,” Paul said.

Part of the agreement is that LSU AgCenter researchers can further evaluate the clone and her offspring.

“We’re glad to be part of this emerging technology,” David said. “We see significant application for the future.”

Helping farm animals have babies efficiently and at the least cost to livestock producers is the focus of the AgCenter’s reproductive physiology research program.

“We’re grateful to people like the Pattridges who are willing to help us with our research,” Denniston said. “The cloning process is by no means perfected yet. An animal’s genetic makeup is enormously complicated.”