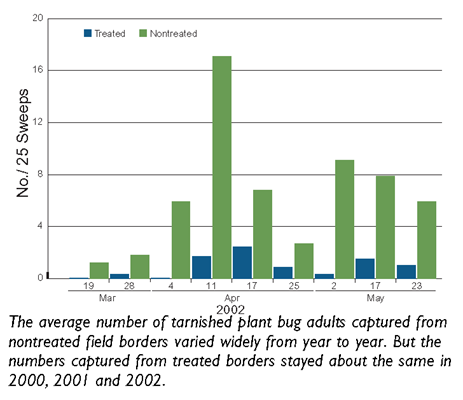 The average number of tarnished plant bug adults captured from nontreated field borders varied widely from year to year. But the numbers captured from treated borders stayed about the same in 2000, 2001 and 2002. 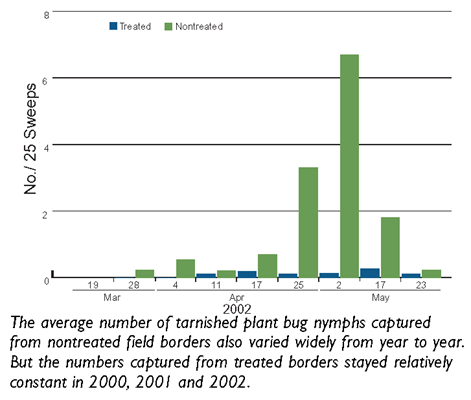 The average number of tarnished plant bug nymphs captured from nontreated field borders also varied widely from year to year. But the numbers captured from treated borders stayed relatively constant in 2000, 2001 and 2002. 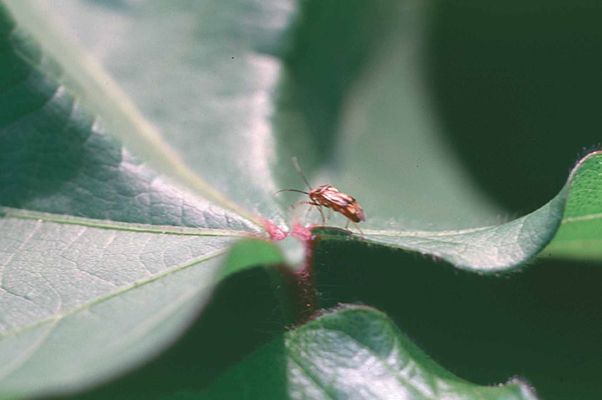 The tarnished plant bug has always caused problems in cotton, but in recent years the problems have escalated. (Photo by Donald Cook)

Successful boll weevil eradication and the adoption of Bt cotton, while reducing the need for insecticide applications to control the boll weevil and tobacco budworm, provided an opportunity for tarnished plant bugs to flourish. Resistance to insecticides such as the pyrethroids, organophosphates and carbamates has contributed to control problems. Resistance to these insecticides increases during the cotton-growing season.

Not only do these factors contribute to higher numbers of tarnished plant bugs, but the broad range of crops and wild hosts that this pest can use for survival is huge. The tarnished plant bug is reported to have a host range of about 390 species of plants, giving it the broadest feeding niche of any of the arthropod pests. In the Delta, research has indicated 169 hosts representing 36 families of plants. These hosts often live next to cotton. The seasonal flowering patterns of these species give the plant bug a consistent habitat from late winter through spring.

LSU AgCenter researchers conducted an experiment in Tensas Parish to evaluate the potential of reducing tarnished plant bugs by managing weed hosts in field border areas adjacent to cotton fields before planting cotton. Each experimental area encompassed about 620 acres in 2000, 1,200 acres in 2001, and 1,700 acres in 2002. One test area in each year was treated with herbicide to control broadleaf weeds in field borders and ditches close to cotton fields.

Herbicide applications were initiated February 23, 2000, and March 19, 2001. Strike 3, a combination of 2,4-D, mecoprop and dicamba, was applied at 2 quarts per acre to kill broadleaf weeds. The weed density and species data were taken before the herbicide treatments and three to four weeks post treatment. Tarnished plant bug adults and nymphs were collected within each area using a standard 15-inch sweep net. Field border sampling was initiated in February before herbicide treatments, and sweep net data from the field borders were collected weekly continuing through the first week of June. Up to 500 sweeps were made in randomly selected cotton fields beginning in mid June through the end of July.

Throughout this study, tarnished plant bug numbers were considerably lower in the areas in which the broadleaf hosts had been removed. For the most part, populations followed a similar cyclic pattern each year. In each year there were definite peaks, although the peaks occurred on different dates. In general, tarnished plant bug adults began to increase in early to mid April and nymphs in mid to late April.

These data indicate that destruction of wild hosts from field borders has the potential to reduce tarnished plant bug populations; however, migration of these insects from other areas such as conservation and wetland reserve areas and corn fields, along with the inability to eliminate all wild hosts, also contributed to plant bug infestations. If used as part of an overall management strategy, wild host destruction will provide another tool to reduce insect pressure and provide economic value to the producer.