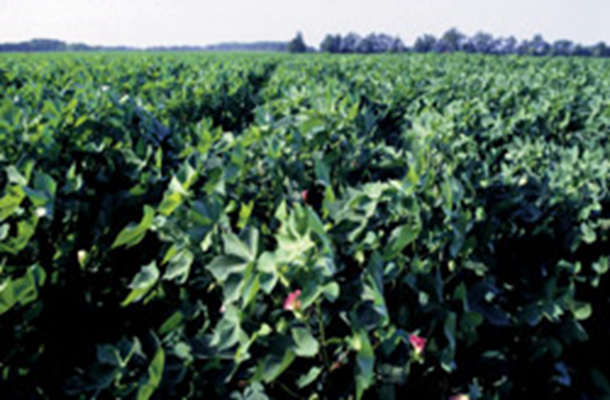 A cotton field near Wisner, La. (Photo by Mark Claesgens) 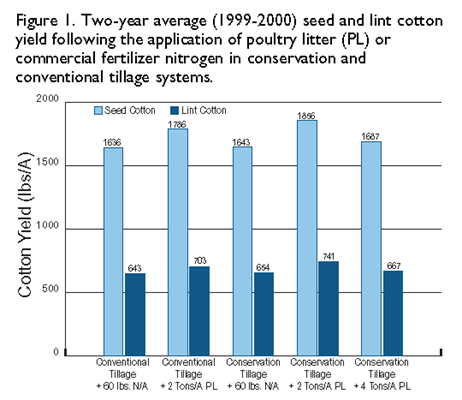 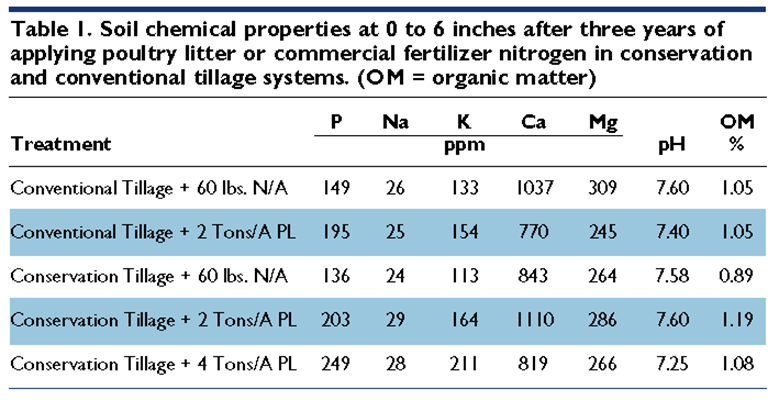 Much of the land where cotton is grown in Louisiana has been used for cotton production for decades. This has left the soil deficient in both nutrients and organic matter. Some of these deficiencies could potentially be corrected by supplementing these soils with organic waste from Louisiana’s poultry industry. This is the state’s largest animal industry generating tons of organic waste that must be disposed of in an environmentally friendly manner.

Litter produced by Louisiana’s poultry industry includes manure and bedding material. The nutrient content of the litter varies depending upon the type of bedding material and feed used. Generally, though, each ton of poultry litter contains about 50 to 60 pounds of nitrogen (N), 50 pounds of phosphorus (P) and 40 pounds of potassium (K). The amount of nitrogen from litter that will become available for cotton growth depends upon several factors including soil pH, temperature and moisture. However, it is generally assumed that about 60 percent (30 to 36 pounds per ton) will become available. Therefore, at least two tons of litter are required to supply 60 pounds of nitrogen.

To determine the potential benefits from the use of poultry litter for cotton production in Louisiana, a study was begun in 1998 at the LSU AgCenter’s Red River Research Station near Bossier City, La. The study compared applications of poultry litter and inorganic fertilizer in conventional and conservation tillage systems. For purposes of this study, conventional tillage involved incorporating shredded cotton stalks, followed by deep tillage in the fall. Rows were bedded approximately three weeks before planting. The conservation tillage system involved delayed seedbed preparation and deep tillage following the shredding of cotton stalks in the fall, but crop residue and volunteer vegetation remained on the surface until the rows were bedded about three weeks before planting. The goal was to encourage native winter cover and maintain at least 30 percent ground cover from harvest until three weeks before planting.

The study was conducted on a Caplis very fine sandy loam soil. The site consisted of approximately eight acres that were precision sloped at 2 inches per 100 feet with laser land-grading equipment. Twelve-row plots (0.25 acre) were replicated four times. Treatments consisted of conventionally tilled and conservation plots that received either 60 pounds of nitrogen or two tons of poultry litter per acre, and a conservation plot that received four tons of poultry litter per acre.

Poultry litter was applied in the spring with a spreader truck that was calibrated to apply a rate of two tons per acre. For this study, the two-ton rates were applied with a single pass and the four-ton rate with two passes. The truck traveled through the middle of each plot, and litter was spread with hydraulically driven disks mounted at the rear of the truck. The litter was spread approximately 35 feet (10 rows).

Cultural practices for cotton production recommended by the LSU AgCenter were followed. Plots that were fertilized received nitrogen (32 percent solution at 60 pounds of nitrogen per acre) placed in the top of the row with a knife applicator. Rows in all plots were shaped with a row conditioner to provide a seedbed uniformly raised to about 4 inches. Each year, a cotton variety recommended by the LSU AgCenter was planted at the rate of 10 pounds of seed per acre. The cotton varieties planted contained the Bt and Roundup Ready genes that provided resistance to the cotton bollworm and tobacco budworm complex and to glyphosate herbicide. A pre-emerge herbicide, a seed-protecting fungicide and insecticide were applied at planting.

Because cotton yield in 1998 was significantly reduced by a record drought, yield data from that year were not included in the summary presented in Figure 1. Comparing the various treatments, two tons of poultry litter per acre with conservation tillage produced the highest seed cotton and lint yield, followed by this rate of poultry litter in a conventional tillage system. Conventional tillage and 60 pounds of nitrogen per acre, considered a standard practice for cotton production, resulted in the lowest seed cotton and lint yield. All plots that received poultry litter as a soil supplement produced higher cotton yields than plots that received inorganic nitrogen fertilizer. Results indicate that two tons of poultry litter per acre appear to be the optimum rate because application of four tons of poultry litter actually decreased yield.