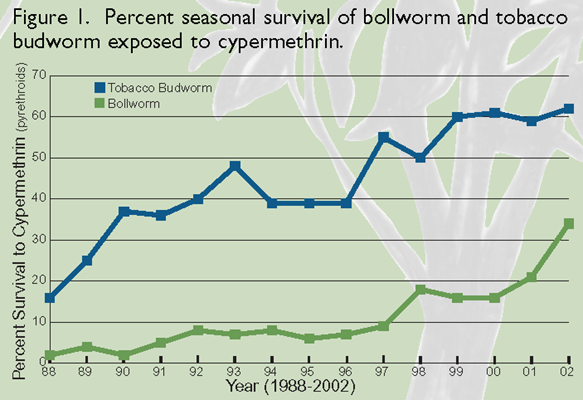 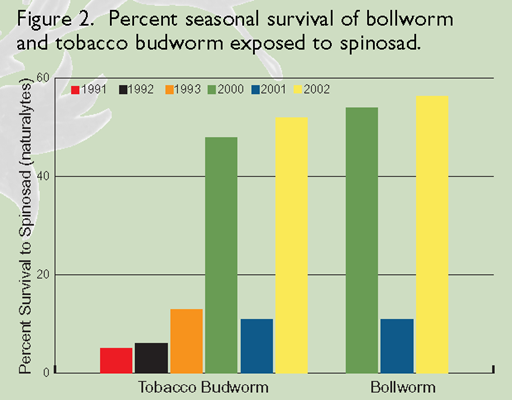 Resistance monitoring provides a useful tool for detecting changes in the insecticide susceptibility of field populations of insect species from year to year. During the late 1980s and into the 1990s, resistance monitoring of the tobacco budworm provided data for establishing and modifying the tobacco budworm resistance management plan implemented by Arkansas, Louisiana and Mississippi. Resistance monitoring also helps validate whether field control failures are the result of a true decrease in insecticide susceptibility or whether other factors should be examined to determine the cause of unsatisfactory control.

Development of resistance in a key cotton pest to a particular chemical or class of chemicals can threaten the profitability of the industry. This is especially true when other integrated management strategies, including alternative chemicals for that pest, are limited.

Monitoring involves the collection of male moths with wire cone traps baited with an artificial sex pheromone lure. These traps were located in several parishes across the cotton production regions of the state. Adult male moths collected from these traps were placed in glass vials treated with one of the selected insecticide concentrations or in nontreated control vials. Cypermethrin was one of the earliest pyrethroids used for control of these two cotton pests in Louisiana. Spinosad is one of the most recently registered insecticides for control of these insect pests. Mortality of the moths in both the treated and control vials were determined after 24 hours of exposure. Information presented here is based on seasonal percentage survival of these two cotton insect pests.

Resistance monitoring continues to be an important tool in monitoring the susceptibility of insect populations in the field to various insecticide classes. Monitoring allows entomologists to follow long-term trends in insect susceptibility. It also provides valuable information in determining the possible causes of insecticide field failures when they occur.

(This article was published in the 2003 spring issues of Louisiana Agriculture magazine.)