This is a field of no-till cotton growing in wheat residue. (Photo by Robert L. Hutchinson) 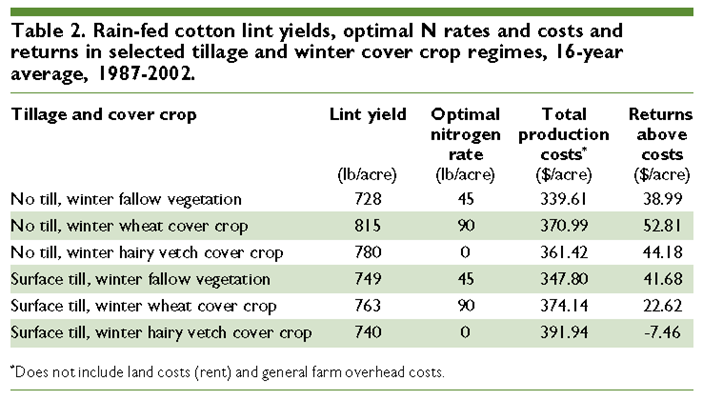 Farming practices can affect environmental and agronomic sustainability as well as productivity. Traditional farming practices in the Mid-South typically use tillage and produce one crop each year, which exposes the soil to long periods with little or no protection from elements that cause sediment and nutrient losses. Multi-crop, year-round systems with summer crops of corn, cotton, soybean or grain sorghum combined with conservation tillage and winter crops of wheat, rye or vetch green-manure are considered best management practices (BMPs). They can substantially reduce farm contributions to nonpoint-source pollution of surface water bodies. BMPs also may benefit farm productivity, sustainability and profitability by improving soil characteristics and crop performance.

Two long-term field studies were conducted at the LSU AgCenter’s Macon Ridge Research Station near Winnsboro between 1987 and 2002 on Gigger silt loam to determine the effects of tillage practices, cover crops and nitrogen rates on cotton growth and yield. Cotton was grown continuously without tillage (no-till) or with surface tillage following annual winter cover crops of wheat, hairy vetch and volunteer winter native vegetation and with fertilizer nitrogen rates of zero, 35, 70, 105 and 140 pounds per acre.

Seedbed preparation of no-till plots consisted only of herbicide treatments for vegetation control applied at least three weeks before planting. Seedbed preparation in surface tillage treatments consisted of four to five operations including disking, bedding and bed smoothing. No postplant cultivation was used in either tillage regime. One of the experiments was rain-fed, and one was irrigated as needed. Other than experimental treatments, varieties, planting methods and management practices were those normally used in the area and recommended by the LSU AgCenter. A list of the treatments for both experiments and the identified optimal N rates are shown in Tables 1 and 2.

An economic comparison of the above cotton production systems was performed using enterprise budgets. Physical input-output data from the experiments were used to develop an enterprise budget for each production system. Actual input levels (fertilizer, seed, herbicide) used were incorporated into the enterprise budgets. Equipment sizes representative of commercial cotton farming operations were used to estimate costs on a per acre basis. Yields were estimated for each system at the mean over the life of the experiment. Output prices used were essentially current loan rates under the 2002 Farm Bill. Input prices were current input prices used by the LSU AgCenter’s Department of Agricultural Economics and Agribusiness to estimate 2002 enterprise budgets for Louisiana. Constant prices and average yields were used to compare the relative profitability of the various systems.

Cover crop biomass and N content. Following a cotton crop and without additional fertilizer, the native, vetch and wheat cover crops produced an average 1054, 2054 and 4045 pounds above-ground biomass per acre, respectively. Nitrogen concentration of the cover crop vegetation averaged 2.0 percent in native, 4.0 percent in vetch and 1.5 percent in wheat. The total amount of nitrogen in the cover crop biomass averaged across year, tillage regime and nitrogen rate was 27, 90 and 38 pounds per acre in native, vetch and wheat, respectively. As indicated by the large amount of nitrogen present in the vegetation, the vetch cover crop provided sufficient nitrogen for production of two-bale per acre cotton without application of inorganic fertilizer nitrogen.

Cotton stand establishment. Seedling emergence and survival averaged about three plants per foot of row and was little affected by tillage practice or cover crop residue (data not shown). Although no-till cotton in the 1970s and 1980s often experienced reduced seedling emergence compared with tilled seedbeds, improvements in planting equipment have alleviated this problem. The results of this study and those of other researchers demonstrate that cover crop residue is not a major hindrance to obtaining near-ideal plant density in no-till cotton fields. With appropriate management and technology use, there is no longer an increase in the risk of production for no-till cotton following a winter cover crop.

Cotton yields in no-till vs. tilled and cover crop versus no cover crop. In the initial years of the study, cotton lint yields in surface-till and no-till regimes were similar but, after five years, no-till yields were higher. No-till increased cotton yield an average of 9 percent. The results demonstrate conclusively that, in the short and long term, cotton yields will not be reduced by no-till practices (Table1). The lowest yielding treatment was one in which no cover crop was planted and tillage was used. Further, the economic analyses of inputs and yield show that savings in equipment and labor costs contribute to increased returns for cotton grown with no-till practices (Table 1).

Lint yields in the rain-fed study were lower than in the irrigated study, but the overall responses to cover crop and tillage were similar to the irrigated study in that both no-till and cover crop increased yield (Table 2). There were important differences, however. Because of the lower yields in most years with rain-fed cotton, potential profitability was much lower than with irrigated cotton. With the lower yield potential, the opportunity for cotton to use fertilizer nitrogen was lower and thus the optimal nitrogen rates were lower. The wheat cover crop was more beneficial to yield in rain-fed than in irrigated cotton, probably because the residue helped to conserve soil water. Highest yields and returns from rain-fed cotton were produced using a combination of a no-till seedbed and winter wheat cover crop.

No-till cotton produced yields similar to or higher than cotton planted in surface-till treatments. Economic analyses demonstrated that no-till benefits were augmented by lower investments in equipment and labor costs than surface till. Savings in tillage costs in no-till were partially negated by increase in chemical costs. The optimal nitrogen rate varied with tillage and cover crop from as low as zero pounds per acre to as much as 120 pounds per acre. The recommended fertilizer nitrogen rate should, therefore, be specific for each tillage and cover crop regime. Tillage, cover crop and nitrogen rate had significant but small effects on seedling emergence, yield components and plant growth variables, none of which were deleterious to yield production. We conclude that the adoption of no-till and winter cover crop BMPs to protect the soil and water quality will not decrease farm productivity or profitability.

This article was published in the spring 2003 issue of Louisiana Agriculture.