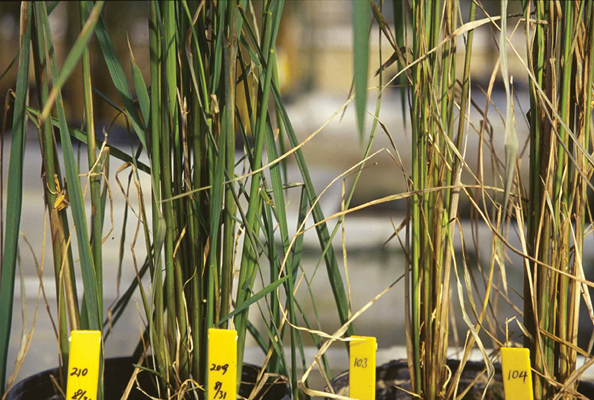 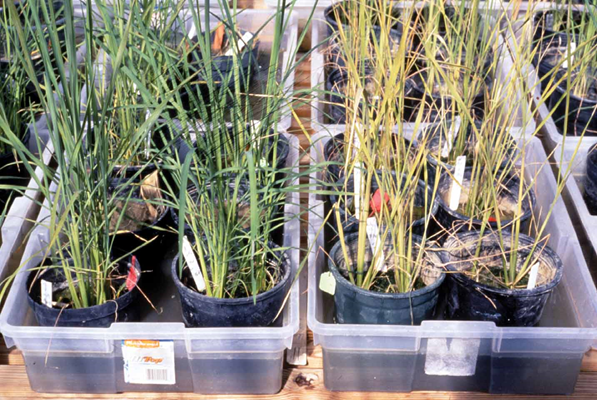 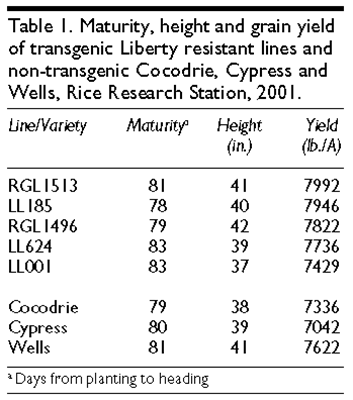 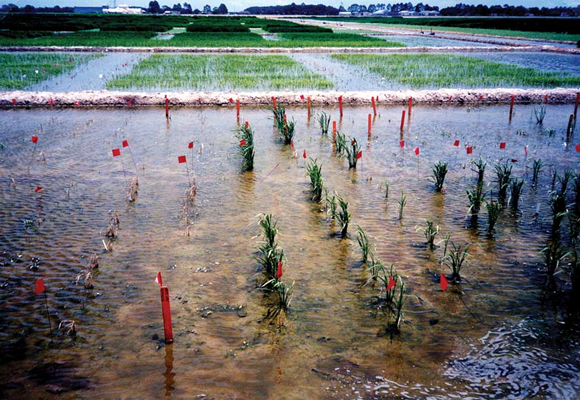 After testing in the laboratory, scientists tested the transgenic lines derived from Cocodrie in the field at the Rice Research Station in Crowley, La. (Photo by James H. Oard)

Rice is one of Louisiana’s leading agricultural commodities, with nearly 532,000 acres planted in 2002, producing an average yield of 5,772 pounds per acre. The 2002 gross farm income reached $122.8 million, and value added in marketing, processing and transportation increased that amount to $159.6 million. In spite of these impressive figures, Louisiana ranks lowest of U.S. rice-producing states for grain yield, in part because weeds and disease can substantially lower net returns to producers. Genetically engineered or transgenic rice has been developed in the LSU AgCenter that shows the potential to avert weed and disease problems, which will benefit
the Louisiana rice industry.

Various weeds in Louisiana rice fields, such as the noxious weed red rice, can cause significant losses in grain yield and quality. To help develop effective weed management tools, we have established an efficient method to introduce genes for herbicide resistance and other traits into elite Louisiana rice varieties and lines. From this initial work, we produced and tested nine independent transgenic lines derived from the variety Cocodrie that contained a gene originally constructed in the laboratory by Bayer Crop Science, Inc. This synthetic gene conferred high levels of resistance to the broad-spectrum Liberty herbicide in transgenic Cocodrie during greenhouse and field trials (Figure 1).

Sheath blight, caused by the fungus Rhizoctonia solani, is the primary foliar disease of rice in Louisiana. All com-mercial Louisiana rice varieties are susceptible to this disease, which can cut rice yields in half. Recent advances have been made through traditional breeding methods. But progress is slow because high levels of resistance are controlled by many genes that must be combined with several desirable factors for high grain yield and quality.

To address this challenge, we transferred the chitinase gene from rice and the glucanase gene from Arabidopsis thaliana, a fast-growing plant useful in research, to the sheath blight-susceptible variety Cocodrie. Chitinase and glucanase proteins are strong antifungal agents that in previous studies with tobacco have reduced infection by Rhizoctonia solani. After gene transfer, more that 100 plants were grown in the greenhouse and inoculated with the sheath blight fungus. Six plants showed higher levels of resistance than nontransgenic Cocodrie. One example is shown in Figure 2.

From this material, 52 lines were advanced and inoculated with R. solani at the Rice Station in 2001. Eight lines exhibited greater resistance than normal Cypress and Cocodrie, and the engineer-ed chitinase protein was detected in leaves of transgenic lines, whereas no corresponding protein was found in normal Cocodrie.

In 2002, seeds from individual plants of the resistant lines were planted at the Rice Station and inoculated with the sheath blight fungus. Three lines from independent events showed increased resistance when compared to nontransformed Cocodrie. Height and maturity, always a major hurdle to overcome when using traditional breeding methods, were essentially identical in the lines compared to normal Cocodrie.

This article was published in the fall 2003 issue of Louisiana Agriculture.