Seedling emergence was much quicker in the plots of Clearfield rice treated with gibberellic acid (foreground) than in the plots without the treatment. The plots on the left, which are Clearfield rice treated with gibberellic acid, show fuller, more vigorous stands than the ones on the right, which were not treated. 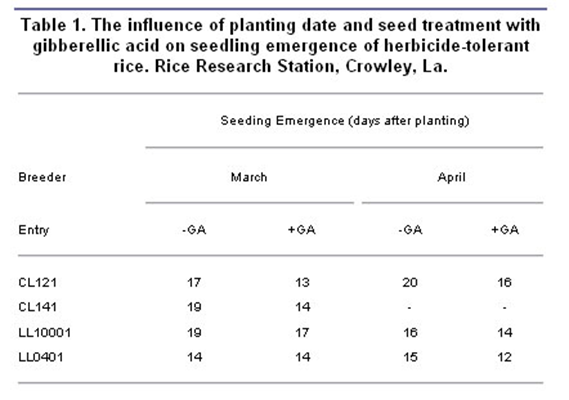 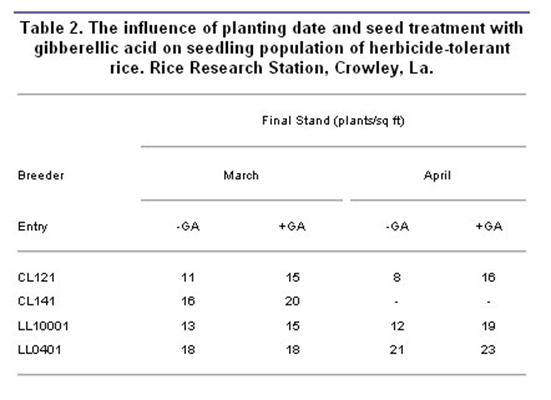 Treating rice seed with gibberellic acid has improved rice production in the northeastern rice-growing area. On semi-dwarf varieties gibberellic acid improves seedling vigor by hastening emergence and increasing seedling population. With the advent of herbicide-tolerant rice, this treatment offers an opportunity to improve rice production in the major rice-producing region of southwestern Louisiana.

Gibberellic acid is currently not used much in southwestern Louisiana because rice treated in this way must be sown in a dry field. This requires a planting method called drill seeding, which involves using a seed-grain planter that places the seed just below the soil surface.

Most rice in southwestern Louisiana is sown in water or on wet soil, with seed being placed on the soil surface. Unlike drill seeding, water seeding allows early flooding and uses water management to suppress red rice, a noxious weed for which there had been no postemergence herbicide control before herbicide-tolerant technology.

Small Plot Tests
Two imidazolinone-tolerant (Clearfield) entries (designated CL-121 and CL-141) and two glufosinate-tolerant (Liberty Link) entries (designated LL0001 and LL0401) were evaluated for their response to seed treatment with gibberellic acid in 2000. Two studies were planted about one month apart—one on March 17 and the other on April 18. Seed of CL-141 was limited and included only in the first study. Each study was an identical comparison of seed treated with a standard fungicide and insecticide and seed treated additionally with gibberellic acid. Seed were drill planted at a rate of 100 pounds an acre and to a depth of 2 inches below the soil surface into a prepared seedbed. At this depth, seed were placed into moist soil containing sufficient moisture for germination. Seedlings grew and emerged, relying solely on existing soil moisture present at planting and rainfall following planting. There was no surface irrigation (flushing), which is a normal practice in rice production. Five rainfalls were spread evenly over the four-week evaluation period after the March planting and totaled 2.5 inches. Rainfall after the April planting consisted of 3.5 inches that fell during a four-day period slightly more than two weeks after planting. It was associated with a late spring cold front.

(This article was published in the winter 2002 issue of Louisiana Agriculture.)