(left) Carefree Delight (AARS 1996) is a vigorous shrub rose with a stunning display of pink and cream blooms. Its graceful arching canes are covered with brightly colored rosehips (fruit) that provide food for birds in winter.(right) Crimson Bouquet is a vigorous grandiflora with bright scarlet blooms. The attractively rounded plant is a classic variety that grows 4 feet tall and 3 feet wide. Glossy deep green leaves are the perfect backdrop for its showy blooms. Glowing Peace is a round, bushy grandiflora with large golden-yellow and cantaloupe-orange blended petals. Its glossy, deep green foliage is a backdrop for the luminous blooms and gives way to burgundy fall color. The fragrance is described as a light tea. This is another progeny of its grandparent, Peace, the world’s most renowned rose. Scentimental (1997) has unique characteristics that add interest to the garden. It is a free-blooming floribunda with burgundy and cream striped blooms. The sweet spice fragrance mimics the scent of the striped hybrid roses of the 1800s. Although striped roses date back more than 100 years, it is the first striped rose to win the AARS award. 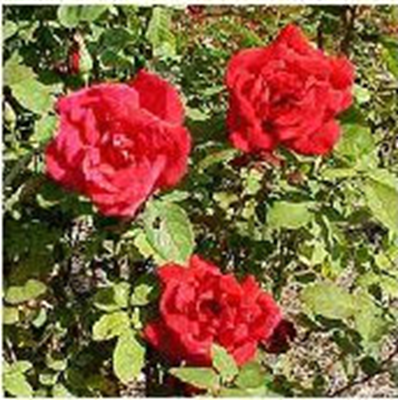 Chrysler Imperial (AARS 1953) is a large-flowered hybrid tea with dark red blooms. This rose was immensely popular when it was first introduced because of its vigorous growth, dark green leaves, good fragrance and velvety rich crimson petals that turn bluish as they age.

(left) Love & Peace is a cross between the legendary Peace (AARS 1946) and an unknown seedling. It is described as a classic upright, disease-resistant, hybrid tea. The large fruity-scented blooms are a golden yellow edged with pink.(right) Starry Night is a shrub rose perfect for large plantings, borders and ground cover. At maturity it is about 6 feet by 6 feet. This rose took top honors for its large clusters of pure white blooms that resemble a dogwood flower.

(left) Marmalade Skies is a floribunda with clusters of brilliant tangerine-orange blooms on each stem. This compact, round plant grows to 3 feet, making it the perfect rose for a hedge or bright addition to any existing rose bed. (right)Sun Sprinkles is only the fifth miniature ever to win AARS honors. Its bright yellow and cream blooms are set against a backdrop of petite, dark green, glossy foliage. The fragrance is described as moderately spicy with overtones of musk. Miniatures are ideal for lining walkways, for containers and for accents in formal rose beds.

(left) Knock Out has received the best disease resistance rating for the past two years at Burden Center. This maintenance-free, flowering shrub rose thrives in all climates. It grows to a height of 4 to 5 feet and has a rounded, bushy form. The blooms are deep, fluorescent cherry red, comple-mented by glossy burgundy-green foliage. (right) Gemini is a medium-tall, upright and vigorous hybrid tea with a pattern of color, blending deep coral pink and rich cream blooms. This classic long-stem rose features dark green foliage, mild fragrance and excellent disease resistance.

Of all the flowers to be found in gardens throughout the world, the rose is the most popular and the most widely grown. Roses can be found in every country, even where the climate is less than ideal. No other flower has been so immortalized and integrated into daily life. Fossil remains found on a slate deposit in Colorado indicate that roses existed 40 million years ago in North America. Of the 200 species of wild roses known worldwide, about 35 are considered indigenous to the United States.

The rose is a plant of incredible variety of form and growth, from the smallest miniature just 6 inches in height to the largest climbers, which can reach 40 or 50 feet. Between these two extremes is a vast array of rose types within these general categories:

– Floribunda roses are bushy with clusters of several small flowers.

– Shrub roses are vigorous and dense with a wide range of flower color.

– Landscape roses are similar to shrub roses, but tend to be lower and more spreading with clusters of small flowers.

– Tree-form roses are a result of pruning (usually a hybrid tea) to produce a woody trunk with foliage and flowers at the top.

– Antique or old garden roses were originally derived from wild roses and include those grown in Europe and Asia for several hundred years. These are becoming more popular.

– Wild roses are true species that have naturally evolved without artificial breeding or human intervention.

In 1938, the All-America Rose Selections (AARS) program was established to evaluate and promote exceptional roses. Every AARS winning rose completes an extensive two-year trial program in which it is judged on disease resistance, flower production, color and fragrance. The LSU AgCenter Burden Center in Baton Rouge is a designated AARS Display Garden where the public can view roses awarded the AARS distinction. New rose selections are received annually and evaluated for performance in south Louisiana. The garden has about 1,500 plants, representing 150 varieties.

The 2003 AARS winners have been selected and are to be delivered for planting in February 2002. The official names are not to be released until the spring of 2002, but a description includes a white hybrid tea, red/white grandiflora, yellow peach floribunda and a smoked orange blend floribunda. In the meantime, people can visit the garden any day of the week to view past winners, including recent additions.