Growing Greenhouse Tomatoes Can Be Profitable 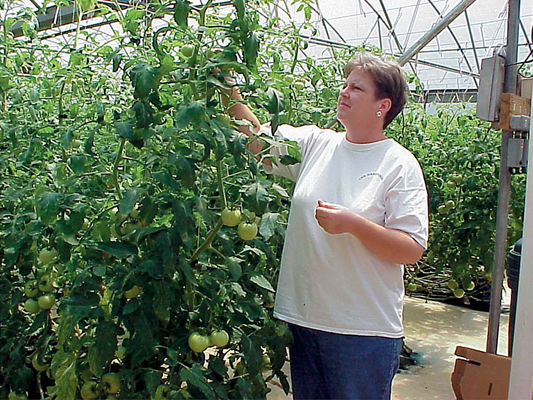 Debbie Otwell of Dubach, La., has learned that growing greenhouse tomatoes can be profitable. She got the idea from the greenhouse production at the LSU AgCenter’s Red River Research Station in Bossier City. (Photo by A. Denise Coolman) 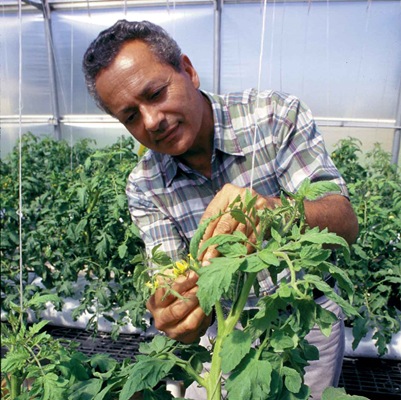 H.Y. Hanna conducts research on greenhouse tomatoes at the Red River Research Station. He works with tomato producers to help them increase their profits. (Photo by Mark Claesgens)

Debbie Otwell has learned tomatoes can be as profitable as they are tasty.

Otwell grows about 2,000 tomato plants, which produce about 35,000 pounds per year, in her three greenhouses near Dubach, La. She got the idea after visiting the LSU AgCenter’s Red River Research Station in Bossier City.

“I originally started growing perennials in the greenhouses,” Otwell said. “But I wasn’t making much money, because at that time no one knew what perennials were. I saw tomatoes being grown in greenhouses at the Red River station, and I fell in love with the idea of growing my own tomatoes.”

Otwell, who has been growing tomatoes for more than five years, said she didn’t realize how much work it would be. While Otwell’s husband, Ricky, helps out sometimes, she says she does most of the work herself.

“A lot of days I stay in my greenhouses working from daylight to dark,” she said. “But that’s what you have to do if you have greenhouses. As long as there’s light, you have to work.

Otwell has about $50,000 invested in the three greenhouses. And as more people are finding out about her tomatoes, business is picking up, Otwell said.

“I make deliveries to stores and stands in Monroe, West Monroe, Bastrop, Natchitoches and wherever else people call me from,” Otwell said. “People just really seem to love the tomatoes after they taste them.

Sue Mitchell of Arcadia became a fan of the tomatoes after she ate some at her church.

“One of the ladies at our church came here and bought some tomatoes,” Mitchell said. “Everyone loved them and asked her where she got them. She told us, and here I am.”

H.Y. Hanna of the LSU AgCenter started a greenhouse tomato project at the Red River station in 1996. Hanna said he believes this is the future for the tomato industry.

“The tomatoes are grown in a controlled environment,” Hanna said. “Problems with diseases and insects aren’t as big as they are for field tomatoes. Another advantage is greenhouse tomatoes can be grown year-round. And it can be profitable. One greenhouse, with 700 plants, can generate $15,000 to $20,000 per year.”

The cost of producing each tomato plant in a greenhouse is about $15 per year, Hanna said. Half that cost is labor and 25 percent is energy, he said, adding that growers can save money by adopting a do-it-yourself approach and using a heating system he developed.

Heating greenhouses can be expensive, Hanna said. Greenhouse tomatoes are normally heated by hot air blown directly into plants’ surroundings from oil or gas furnaces, he said. They also can be heated by circulating hot water through the interior of the greenhouse in pipes that release the heat to the plants’ environment. But heating greenhouses by using forced air is more popular among growers because of simplicity and ease of maintenance of such a system, Hanna said.

Traditionally, furnaces that generate heated air are suspended as high as 10 feet above the greenhouse ground level to keep the heaters out of the workplace and to blow the heated air above the plant tops. In top-heated greenhouses, there can be temperature differences of up to 15 degrees F from the top to the bottom of plants, because warm air is lighter and stays at the top.

“More heat has to be generated to ensure adequate warming at the plant level,” Hanna said. “Even with more heat generated, root-zone temperatures remain less than optimum for improving plant growth and yield.”

To solve the problem, he modified the heat distribution channels so that one system could heat the growing medium, the pipes carrying the nutrient solution and the air around plants.

The changes include using a floor heater connected to an 18-inch duct for heat transfer. The duct has five equally spaced 8-inch openings for releasing warm air into five perforated poly tubes. Each poly tube is laid over a feeding pipe carrying the nutrient solution to the plants and is placed snugly between double rows of tomato growth bags.

Greenhouse tomato growers also save money because they don’t have to buy a lot of chemicals to spray their plants for pests and diseases, Hanna said. This savings also is passed on to the consumer.

Growers also can save money by building their own greenhouses, Hanna said. The cost for a contracted greenhouse is about $20,000.

“But if growers build their own houses, they can save about 66 percent of this cost,” he said. “If you can use simple tools, you can build a greenhouse.”

Among the supplies and equipment needed in greenhouses are fans, heaters, pumps and cooling pads, he said.

Once a greenhouse has been built and growers are ready to plant their tomatoes, they will need to get some type of medium to put the plants in. Hanna suggests using perlite, a processed volcanic mineral widely used as a propagating and growing medium for many horticultural crops, including tomatoes. The initial rock found in nature is crushed into small pieces and heated to 2000 degrees F. The trace of moisture trapped inside the small pieces evaporates and puffs the granules just like popcorn.

“Perlite is a lightweight mineral, easy to handle, pathogen-free and will never decompose,” Hanna said. “Growers have to replace it every year or two to minimize the risk of crop failure because of salt and pathogen buildup. So the expense to dispose of the old material and replace it with new perlite shipped from distant markets can be significant.”

Hanna has developed a procedure to clean, sterilize and recycle perlite.
Following the tomato harvest and removal of all vegetation from the greenhouse, perlite is sifted to remove tomato roots and restore its original loose structure. For better handling of the medium and to minimize labor input, researchers built a simple movable hopper equipped with a wire mesh screen for sifting the perlite to isolate and remove tomato roots. The hopper is built on wheels and can be rolled between the tomato rows in the greenhouse.

“Perlite mixed with old tomato roots is poured out of the grow bag onto the hopper screen and shaken well,” Hanna said. “The loose, root-free perlite is collected in a receiving bag at the bottom. It is then treated with hot water at temperatures reaching 200 degrees F using a hot water pressure washer to leach out excess salt and kill pathogens and insects.”

This procedure can be repeated once a year after harvest, he said. A. Denise Coolman

(This article was published in the summer 2002 issue of Louisiana Agriculture.)