Light Interception: A Way for Soybean Farmers to Determine When to Spray for Defoliating Insects 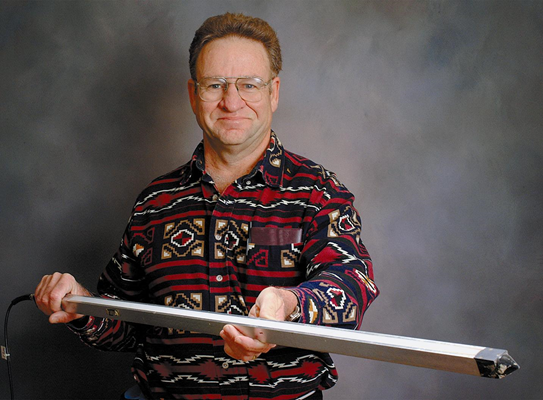 This light bar is used to measure light interception in a soybean field. At midday when the sun is at its highest point and there are no shadows, the bar is placed on the ground diagonally between two rows to measure the light that gets through. Another measurement is taken above the plants, and these two measurements are compared. The amount of light that reaches the plant affects the photosynthetic reactions and thus the growth of the plant and ultimately the yield, says James E. Board, agronomy researcher. (Photo by John Wozniak) 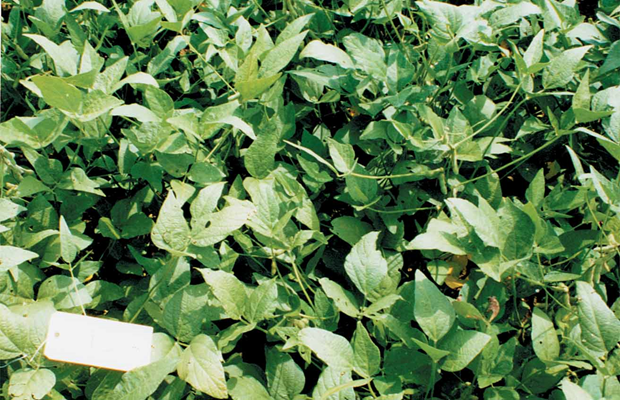 95% light interception; gaps begin appearing between leaves and a small amount of ground is visible. (Photo by James E. Board) 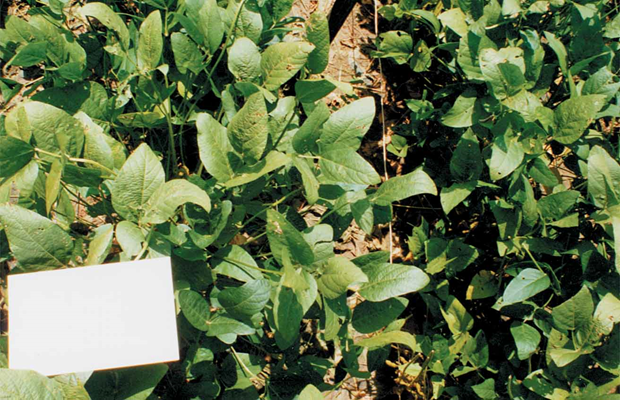 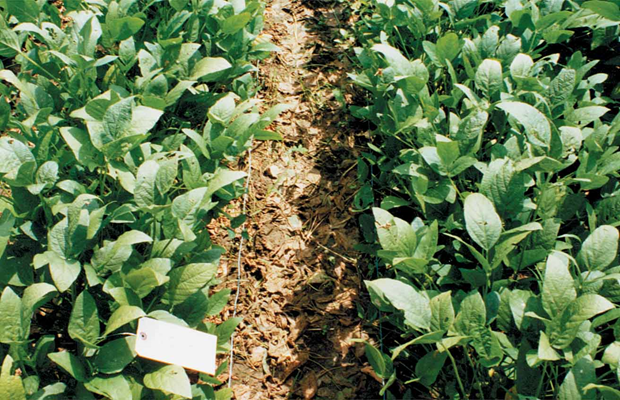 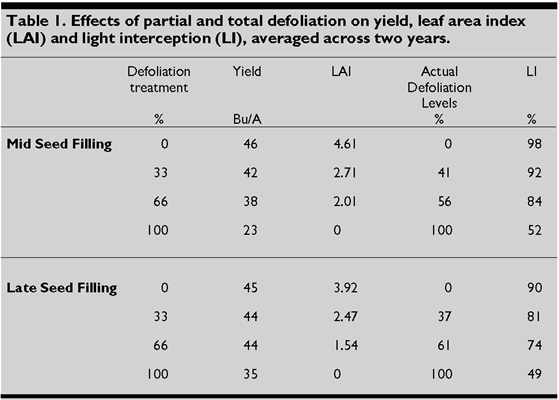 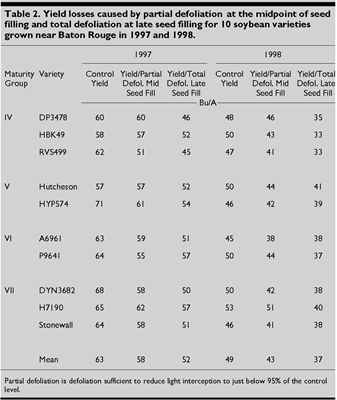 Insects that eat soybean leaves, such as the soybean looper, velvetbean caterpillar and green cloverworm, usually attack in late August and September. With the exception of varieties planted in April, most soybeans planted in Louisiana are in the mid to late seed-filling period at this time. Economic thresholds have been developed to indicate to farmers when insecticide application is required to avoid yield loss, but these thresholds do not reflect the soybean’s increased tolerance to defoliation as it progresses through the seed-filling period and, therefore, may be overly conservative.

Many researchers have recognized that insect defoliation reduces yield primarily through reduced photosynthetic activity caused by decreased light interception. Previous studies have demonstrated the importance of maintaining 95 percent light interception (of whatever the control level is) during seed filling for optimum yields. Our objectives in the following studies were to determine specific light interception criteria for insecticide application at the mid and late seed filling stages and to determine if these criteria are applicable across a broad range of soybean varieties.

Ten soybean varieties representing Maturity Groups IV, V, VI and VII were tested in 1997 and 1998 to determine if the criteria for insecticide application described above were applicable across a range of different varieties. These varieties were given a partial defoliation treatment at the midpoint of seed filling sufficient to reduce light interception to just below 95 percent of the control level and a total defoliation treatment at late seed filling. Yields for these treatments were compared to a control to determine if yield losses were similar to those for Centennial in the previous experiments. In 1997, partial defoliation at mid seed filling for all varieties, except DP3478 and Hutcheson, resulted in small yield losses (Table 2). In five cases, yield losses were large enough to be statistically significant. When averaged across all varieties, there was a 5 bushel per acre yield loss, a reduction similar to the 4 bushel per acre loss with Centennial. Yield losses in 1998 were similar, although a little larger, compared to 1997.

Use of light interception criteria for insecticide application by farmers and consultants depends on proper identification of the mid and late seed filling periods, as well as determination of light interception. Developmental periods for soybean varieties within a maturity group tend to be similar because of strong genetic control. For May plantings, approximate times for mid and late seed filling for the different maturity groups are listed below.

Light bars can be purchased commercially for about $1,500 to $2,000. Recordings should be taken between 11 a.m. and 3 p.m. while the sun is not blocked by clouds. More research is needed to determine the optimum number of samples required per field. However, the technique offers an alternative to the traditional method of sampling and assessing the insect population and the defoliation level to determine whether an insecticide application is warranted. With training and experience, private pest management consultants, extension agents and farmers may be able to accurately assess light interception levels by visual observations. This would be advantageous because it would avoid the expense of the light bar and reduce sampling time. Also, determinations could be made at any time of the day, as long as the field could be entered.