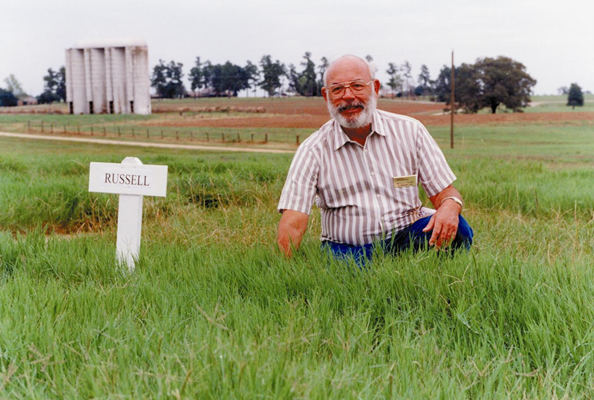 Marcus Eichhorn Jr., a researcher at the LSU AgCenter Hill Farm Research Station near Homer, is at a variety trial plot of Russell bermudagrass. This variety was developed jointly by the Louisiana and Alabama agricultural experiment stations and released in 1994. Russell continues to provide excellent performance and is widely used by Louisiana cattle producers for their pastures. 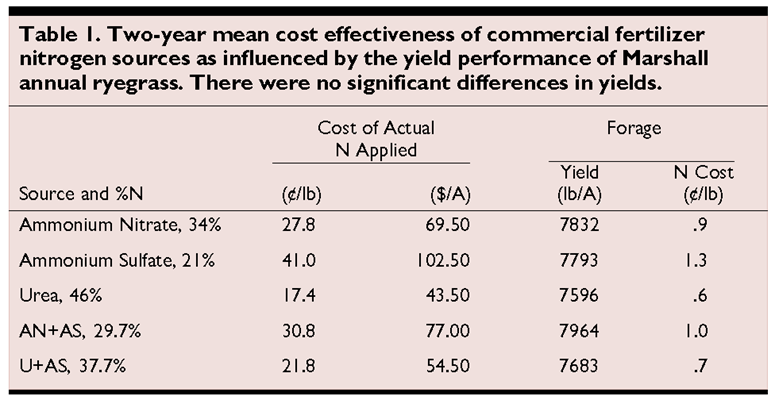 Table 1. Two-year mean cost effectiveness of commercial fertilizer nitrogen sources as influenced by the yield performance of Marshall annual ryegrass. There were no significant differences in yields. 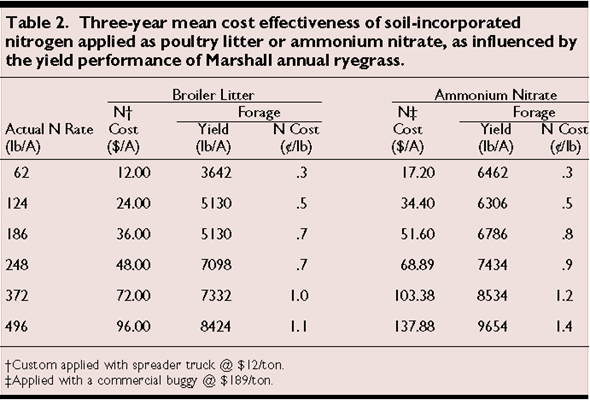 Beef and dairy producers in north Louisiana plant more than 30,000 acres of hill land to annual ryegrass each fall for grazing cattle during the winter and spring. Nitrogen is the most limiting plant nutrient required for annual ryegrass production on these sandy Coastal Plain soils. Fertilizer nitrogen requirements for annual ryegrass pasture, baleage and silage production are the highest among the essential plant nutrients, and nitrogen is the most expensive nutrient in the fertilizer budget. Moreover, the source of fertilizer nitrogen can have a considerable effect on cost.

Poultry Broiler Litter As Fertilizer
Poultry production is Louisiana’s largest animal industry. More than 150,000 tons of broiler litter manure waste are produced annually. The broiler litter contains all of the plant nutrients required for crop production. Incorporation of broiler litter or commercial fertilizer into soil before planting a crop is the most “environmental friendly” fertilization practice to follow. Yield responses of Marshall annual ryegrass to soil-incorporated broiler litter rates of 1, 2, 3, 4, 6 and 8 tons per acre were determined for three years on Bowie fine sandy loam soil.

Selection of Nitrogen Sources for Annual Ryegrass Production
Results revealed that where ammonium nitrate, ammonium sulfate, urea and blends of ammonium nitrate-ammonium sulfate or urea-ammonium sulfate were broadcast on the surface of the crop during the growing season, yield performances were not significantly different among nitrogen sources. Urea was the most cost-effective nitrogen source on the basis of currently quoted vendor prices in north Louisiana. For ammonium nitrate to become more cost effective than urea, based on the ryegrass yield performance in this study, the cost per ton would need to be less than $119. Results also revealed that soil-incorporated broiler litter was more cost effective than ammonium nitrate in the presence of actual nitrogen rates required for acceptable crop production levels. At the price of ammonium nitrate, broiler litter applied at 4 tons per acre had a nitrogen fertilizer equivalency value of $16 per ton for ryegrass forage production.

Overall, these results showed that the source of nitrogen designated for annual ryegrass production will affect the cost of forage production. Livestock producers should consider the cost of actual nitrogen among nitrogen sources when preparing fertilizer budgets for intended fall plantings.

(This article was published in the winter 2001 issue of Louisiana Agriculture.)