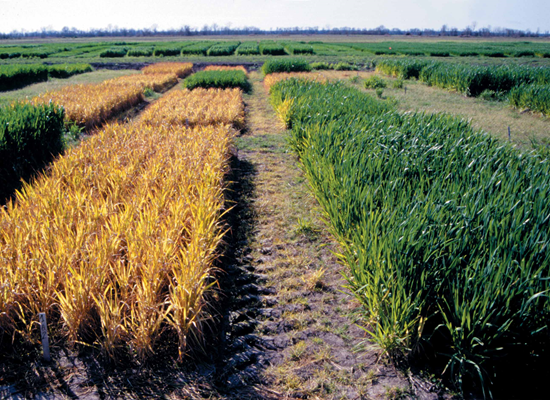 These are some of the research plots at the Northeast Research Station used to study rate and timing of burndown of wheat cover crops. Fifteen studies were conducted between 1998 and 2000. (Photo by Bill J. Williams) 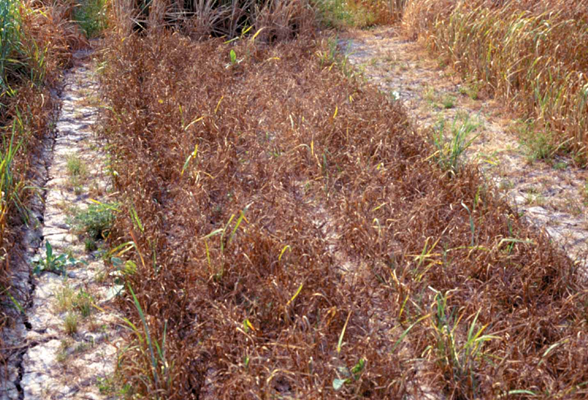 Wheat growth stage at time of glyphosate application was the most important factor in determining the success of terminating wheat cover crops. In this plot, Roundup Ultra was applied prior to jointing. (Photo by Bill J. Williams) 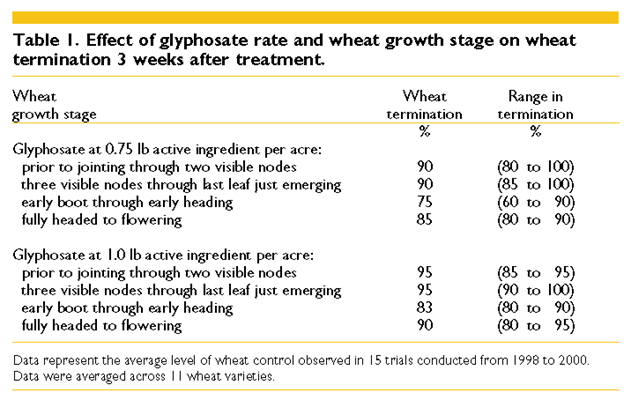 Growing winter wheat has multiple benefits that can lead to an increase in farm productivity. A wheat cover crop stabilizes the soil during high rainfall months and increases soil productivity by increasing organic matter and biological activity. Wheat is especially beneficial when the residue is left on the soil surface and the following summer crop is planted using no-till practices.

The residue covers the soil, which helps to prevent packing effects of rainfall. This reduces runoff and increases rainfall infiltration. The residue also protects seedlings from rapid temperature changes and wind damage. No-till planting into wheat cover crop residue consistently increases the yield of cotton and may increase the yield of other crops. With this practice, growth of the wheat is usually terminated before grain fill and not harvested for grain, so the cotton crop can be planted on time.

To obtain maximum benefits from a wheat cover crop, the wheat must be completely terminated three weeks before planting a summer crop. Wheat cover crops are typically terminated with a nonselective herbicide, such as paraquat or glyphosate, applied between jointing (stem elongation) and maturity. After jointing and before heading, wheat is less susceptible to paraquat. Inconsistent results and the reluctance of many aerial applicators to apply paraquat make glyphosate the more popular herbicide for terminating wheat cover crops. Occasionally, producers observe less than optimum results with single or sequential glyphosate applications, raising the question of varietal differences in tolerance to glyphosate.

However, differences in glyphosate tolerance among wheat varieties were not expected to account for the large differences in treatment efficacy. Wheat growth stage at the time of glyphosate application and glyphosate rate are suspected to be more likely reasons for unsatisfactory results. Therefore, the effects of variety selection, wheat growth stage and glyphosate application rate on terminating wheat cover crops were evaluated from 1998 through 2000 at the Northeast Research Station. Different formulations of glyphosate (Roundup Ultra, Touchdown and Engame) were also compared.

Glyphosate was applied at different times and rates to selected wheat varieties to evaluate the effects of wheat growth stage and variety on glyphosate effectiveness for growth termination. When glyphosate was applied (February 15, March 1, March 15 and March 25), each variety was at a different growth stage. Because of this, it was difficult to completely separate growth stage from variety effects. However, out of the 15 studies conducted between 1998 and 2000, enough observations were made for several varieties at similar growth stages to identify important trends.

Application rate also influenced glyphosate effect on wheat growth termination. Glyphosate used at a rate of 0.5 pound active ingredient per acre did not adequately control wheat regardless of variety or growth stage (data not shown). When applications were made at susceptible growth stages (less than three visible nodes or fully headed), the 0.75 and 1.0 pound rates were equally effective. Glyphosate at 1.0 pound active ingredient per acre was about 10 percent more effective than at a 0.75 pound rate when wheat was at a transitional or difficult to control (last leaf emerging through early heading) growth stage. All formulations of glyphosate were equally effective when applied at susceptible growth stages and recommended rates.

While small differences in glypho-sate tolerance among wheat varieties were noted, growth stage at the time glyphosate was applied was the most critical factor in determining the degree of growth termination. Variety selection is still important, though, because variety and planting date will determine the growth stage when glyphosate is typically applied (mid to late March). The best approach for terminating a wheat cover crop is to apply glyphosate at a rate of 0.75 to 1.0 pound active ingredient per acre before wheat reaches the boot growth stage or after it is fully headed and beginning to flower. The later date is preferred because the wheat has at this point produced maximum vegetative growth and will provide full benefits of a cover crop.

(This article appeared in the summer 2001 issue of Louisiana Agriculture,)