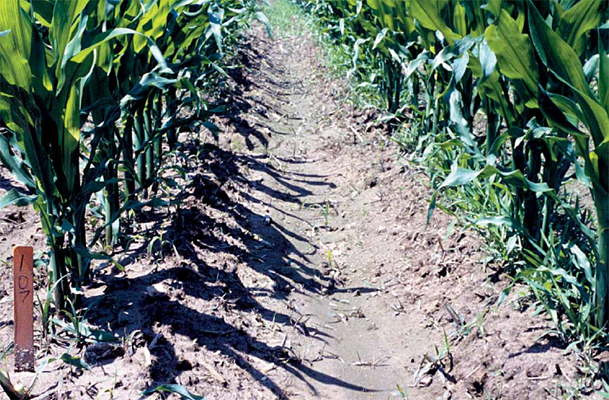 The Clearfield corn on the left was treated with Lightning, a postemergence herbicide. The row on the right was not treated, and itchgrass and broadleaf signalgrass are growing there. (Photo by James L. Griffin) 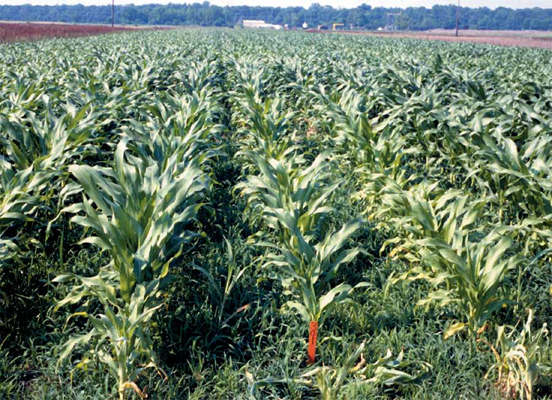 The Roundup Ready corn at the top was not treated. The corn at the bottom was treated with Roundup Ultra at 1 quart per acre. (Photos by James L. Griffin) 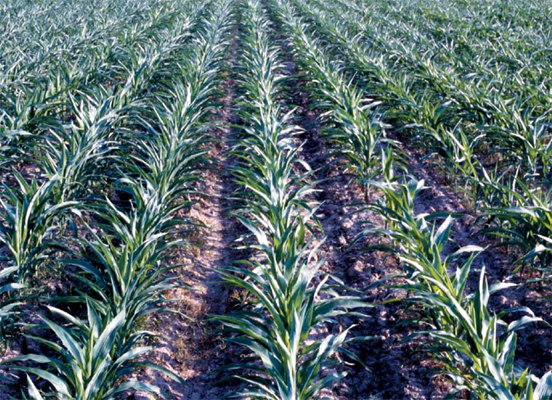 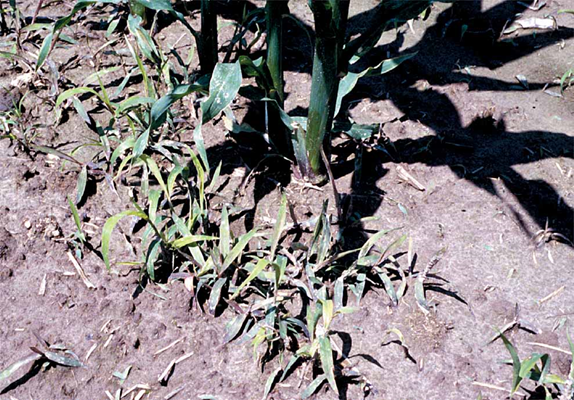 The best time to plant corn in Louisiana is from mid to late March. During that time lower soil temperatures can inhibit germination of weed seeds and delay growth of emerged seedlings, which helps with weed management. The critical time to remove weeds from corn for maximum yield ranges from four to six weeks after planting.

In some cases, depending on weed spectrum, use of soil-applied herbicides alone can be sufficient for season-long control, especially when corn growth is rapid and canopy closure occurs early in the season. Producers in the mid-South have traditionally relied on soil-applied residual herbicides in corn weed control programs; however, the development of herbicide-tolerant corn may mean a change in strategy. Use of effective postemergence herbicides could eliminate the need for a soil-applied treatment.

Bicep (Dual plus atrazine) as a stand-alone preemergence program

Bicep, Dual, Prowl or atrazine preemergence followed by Roundup Ultra at 1.5 pints per acre or Liberty at 20 ounces per acre early postemergence

Atrazine plus Roundup Ultra at 1.5 pints per acre or Liberty at 20 ounces per acre early postemergence

Roundup Ultra or Liberty at the same rates early postemergence

Roundup Ultra at 1.5 pints per acre or Liberty at 20 ounces per acre both early and late postemergence

For the two years, 28 days after application of early postemergence treatments, results were as follows:

Because of inadequate rainfall, the yield potential of the hybrids was not realized, and differences observed in weed control were not reflected in yield.

In another study, Roundup Ultra at 2, 4 and 6 pints per acre and Liberty at 28, 56 and 84 ounces per acre (1x, 2x and 3x rates) were applied to the respective hybrids at 4-, 6- and 8-leaf. Corn yield for each hybrid was equivalent to the nontreated weed-free control in 1998, when only 7 inches of rainfall was received during the growing season and in 1999, when corn was irrigated as needed. Yield the second year was more than 200 bushels per acre and averaged 1.3 times higher than in 1998. The consistency in response of the hybrids to the herbicides over the two diverse years indicated a high level of tolerance.

Experiments were conducted over the same two years to evaluate crop response and weed control with Lightning in Clearfield (Pioneer 3395 IR) corn. Weed control programs included standard preemergence and post-emergence herbicides applied alone and in combination with Lightning postemergence. The hybrid was highly tolerant to Lightning applied from 5- to 9-leaf at twice the labeled rate of 1.28 ounces per acre.

In the first year, corn yield was highest when Lightning alone was applied postemergence, but in the second year, yield for this treatment was no higher than when Bicep was applied. Conditions both years were not conducive to the maximum yield potential of the hybrid.

New Systems Can Be Effective

Results indicate that depending on weed spectrum and timeliness of application, Roundup Ultra, Liberty and Lightning can provide effective postemergence control when used as stand-alone programs. Hybrids were tolerant to the respective herbicides. Consistency in season-long weed control was enhanced in many cases when the herbicides followed a preemergence treatment. Preemergence herbicides can be beneficial in delaying emergence and slowing growth rate of weeds to allow flexibility in timing a postemergence application. When only postemergence herbicide programs are used, application timing is critical to reduce weed competition and to secure maximum yield potential of the hybrid. The decision to use a soil-applied herbicide in corn also should be based on negative environmental effects associated with movement of the herbicide from fields when significant rainfall occurs soon after application and the potential residual effect on other crops should replanting be required. In none of these studies was johnsongrass a problem weed; however, past research has shown that Roundup Ultra, Liberty and Lightning all control johnsongrass and are, therefore, viable options.

Since Roundup Ultra, Liberty and Lightning do not have significant soil residual activity, multiple applications may be required to obtain season-long control. When conditions are conducive to rapid early season corn growth, coverage of weeds underneath the crop canopy with spray solution may be hindered, requiring use of drop nozzles.

Selection of herbicide programs in corn should be based on grower preference, yield potential of the hybrid and economics. At present, the LSU AgCenter does not recommend herbicide-tolerant hybrids that allow for use of glyphosate herbicides (Roundup Ready), Liberty (Liberty Link) or Lightning (Clearfield). However, when higher yielding hybrids are developed for the mid-South climate, this may change.

Acknowledgment Louisiana Soybean and Grain Research and Promotion Board