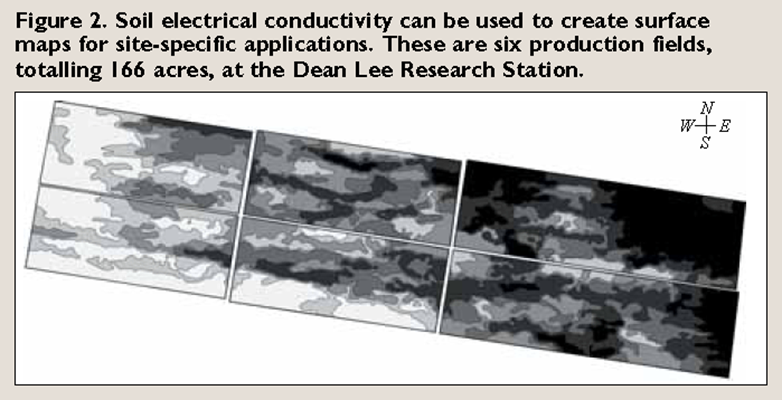 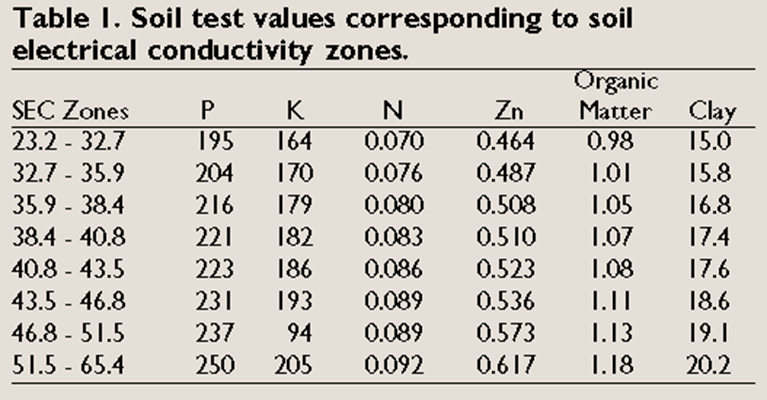 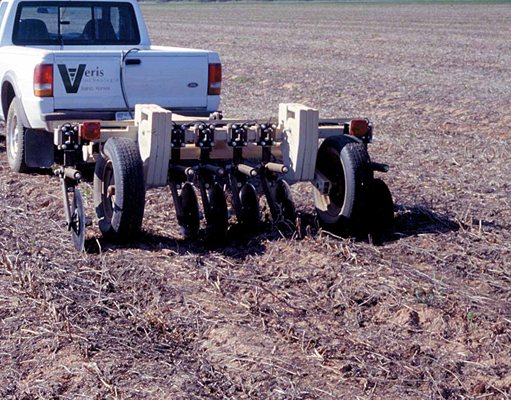 Soil electrical conductivity was measured in a production field at the Dean Lee Research Station and found to correlate with soil texture, organic matter, soil nutrients and crop yield. Research is under way to calibrate nitrogen needs in corn and cotton based on soil electrical conductivity, paving the way for site-specific fertilizer application.

Measuring electrical conductivity in soil has been investigated as a way to determine its fertility and productivity. This may help farmers make site-specific fertilizer applications. The end result is increased efficiency and reduced waste. A research project at the LSU AgCenter’s Dean Lee Research Station was initiated to determine how closely electrical conductivity corresponded to changes in soil texture, soil nutrient concentration and crop yield.

Electrical conductivity was measured in a 166-acre field of silt loam to silty clay loam soil at the station on October 27, 1998, using a Veris 3100 sensor cart (Figure 1). Coulters on this cart are equipped with electrodes through which an electrical current is passed. The Veris sensor cart can measure conductivity at two depths simultaneously, and in this study it was measured at 12- and 36-inch depths.

Soil texture affects the amount of fertilizer required to produce optimum crop yields. Usually clay soils require more fertilizer. One outstanding feature of electrical conductivity in this study was how well it corresponded to changes in soil texture.

Soil electrical conductivity is depicted in the surface map in Figure 2 using 400 square-foot grid cells. The darker the shade, the higher is the conductivity. Of note is the general increase in conductivity from west to east (left to right) across the field. This corresponds to an increase in heaviness of soil texture. The highest conductivity measurements in the eastern-most portion of the figure fairly accurately depict the denser clay soil in this area. The surface map may be used as a prescription map for fertilizer input based on soil texture.

Soil nutrient concentration also affects the amount of fertilizer needed to produce optimum crop yields. Soils with high clay and organic matter usually have higher nutrient concentrations because there is more total surface area for nutrients to attach to, although the nutrients may not necessarily be more available to the plant. Soil electrical conductivity corresponded highly with soil nutrients in this study.

Soybean and corn yields for the past four years were correlated with electrical conductivity. To do the analysis, the field was divided into 400 square-foot grid cells, or rasters. Values from more than 15,000 rasters were used to derive the correlation coefficients in Table 3. Yield correlated significantly with electrical conductivity each season, although correlations were weak.

A somewhat puzzling finding was the negative correlation between electrical conductivity and yield in 1997. In the three other years, conductivity correlated positively with yield. The difference could be explained by rainfall patterns across the four seasons. Heavy-textured low areas of a field tend to do better in dry years and worse in wet years. The 1997 season was fairly normal, whereas the 1998, 1999 and 2000 seasons all had uncharacteristically hot, dry periods. The implication is that the relationship between electrical conductivity and yield will differ each season. Fertilizer rate recommendations in site-specific agriculture will be based on average response, just as in conventional agriculture.

Correlation of means between electrical conductivity and corn yield in 1999 from the zones in Table 1 was much higher (0.97). Correlating means often results in higher coefficients.

Acknowledgment Louisiana Soybean and Grain Research and Promotion Board for its support.