Llama Mamas Give Birth to Alpacas 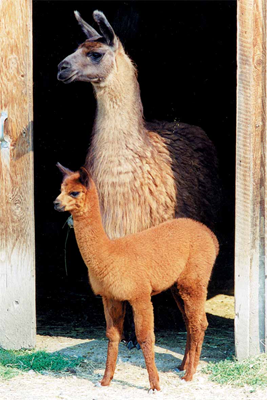 Last summer, far to the north from their historic home in the Andes on a ranch near Bozeman, Mont., two llama mamas gave birth to alpacas.

These were the first cross species births between alpaca and llama brought about through embryo transfer technology.

“The first we know of anyway,” said Paul Taylor, owner of Taylor Llamas, the ranch about 23 miles north of Bozeman on mountainous terrain where the historic event occurred. Taylor lives there with his wife, Sally, and about 150 llamas.

Taylor received support and advice on this project from Robert Godke, researcher with the LSU AgCenter. Godke is director of the Embryo Biotechnology Laboratory. He has been a pioneer in assisted reproductive research for more than 25 years, helping to perfect techniques for test tube fertilization, embryo microsurgery and the implantation of these embryos into surrogate mothers.

Some of the latest projects at the LSU AgCenter’s lab include the cloning of goats and cattle and the first horse born through the process of test tube, or in vitro, fertilization that involved taking eggs from a pregnant mare. His graduate students have gone on to become leaders in both animal and human assisted reproduction.

The Taylors, who have operated a llama ranch for 25 years supplying the exotic pet industry around the world, had read of Godke’s research work. Taylor, a former dentist and self-taught in embryo transfer techniques, has produced more than 100 embryo transfer llama babies from llamas. Several years ago, the Taylors made a cooperative agreement with Godke’s team for help in enhancing their expertise.

Although the successful births are good for Taylor’s business, they are also good for science, Godke said.

“We’re expanding our knowledge of how to be successful in cross species embryo transfer,” Godke said. “This has implications for the domestic animal industry and certainly the survival of endangered species.”

The Taylors’ next quest will be trying to produce the vicuna, which is a nondomesticated member of the same camelid family as llamas and alpacas. The vicuna, which is even smaller than the alpaca, is endangered. Taylor is negotiating with the Argentina government to obtain some vicuna skin cells to use for vicuna propagation.

“With adult cells we can try to produce clones,” Godke said. That is the way Dolly, the sheep in Scotland, was cloned.

One of Godke’s graduate students, Aidita James from Houston, Texas, assisted the Taylors in their cross species embryo transfer project.

“This success will help pave the way for saving the vicuna,” she said.