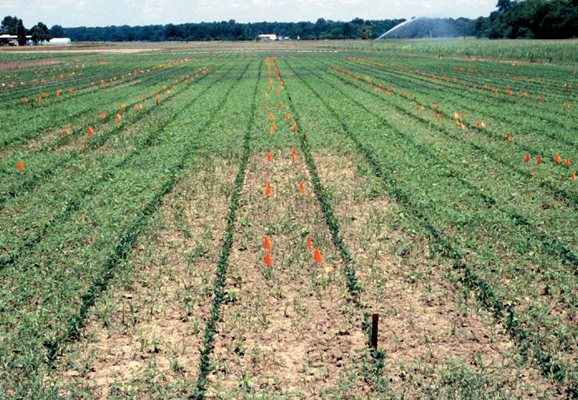 The plot in the foreground has been treated with soil-applied preemergence herbicide. The area in back and along the sides was not treated. Notice the difference in the number of weeds present. The marked areas are where the weed counts were made. (Photo by James L. Griffin) 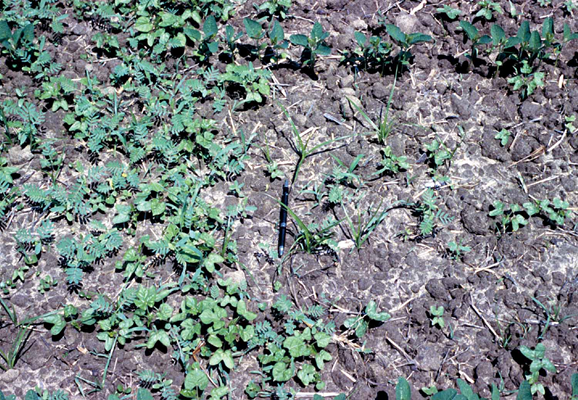 The area to the right of the pen has been treated with soil-applied herbicide. The area on the left has not. (Photo by James L. Griffin)

Glyphosate is a postemergence, nonselective herbicide that controls many annual and perennial weeds. Trade names include Roundup Ultra, Roundup Ultra Max, Roundup Original, Glyfos, Glyphomax Plus, Gly-Flo, Glyphosate Original and Touchdown. Soybeans with the glyphosate-resistance gene (Roundup Ready soybeans) were introduced in 1996 in the United States. In 2001, more than 75 percent of the soybean acreage in Louisiana was planted to Roundup Ready varieties, and acreage is expected to increase.

Weed control with Roundup depends on weed species and their growth stage and weather conditions at application. This herbicide is particularly effective on a number of troublesome weeds in Louisiana soybeans including sicklepod, johnsongrass and annual grasses such as red rice, common cocklebur, pigweeds and wild poinsettia. However, Roundup is not as effective on hemp sesbania, morningglories, prickly sida (teaweed), spreading dayflower and nutsedges.

The availability of Roundup Ready soybeans provides postemergence herbicide alternatives for weed control, but raises questions as to how this technology will fit into current management programs. According to Monsanto, the manufacturer of Roundup formulations, soil-applied residual herbicides are not needed in Roundup Ready soybeans since a single, timely application or multiple applications of Roundup alone are sufficient for weed control. An effective soil-applied herbicide, however, can eliminate or reduce early season competition of weeds to secure crop yield and allow the grower flexibility in timing a postemergence herbicide application.

Experiments were conducted for three years, from 1998 through 2000, using Asgrow 5901 RR soybeans planted in 30-inch rows in mid-May to early June at the LSU AgCenter’s Ben Hur Research Farm near Baton Rouge. Soil-applied preemergence treatments included labeled and half rates of the following herbicides:

To activate the herbicide, plots were overhead irrigated (0.75 inch) within three days after application. If plots had not been irrigated or rainfall received shortly after herbicide application, weeds would have emerged along with soybeans since soil moisture was adequate for seed germination. In this situation, preemergence herbicides would have little influence on weed emergence, and their value could not have been adequately determined. Irrigation was continued as needed throughout the growing season.

Weeds were monitored at two-day intervals beginning seven days after initial emergence to determine number of days from soybean planting required to reach the selected treatment stage of 4 inches. When the first weeds reached this stage, Roundup Ultra was applied at 1 quart per acre. Just before the initial Roundup Ultra application, weed density and height were determined from each plot to evaluate the degree of control for each treatment and to assess the herbicide effect on weed growth rate. Weed control was visually evaluated 14 days after the Roundup Ultra application. Soybeans were harvested in late September to mid-October.

Weeds included barnyardgrass, ivyleaf morningglory, prickly sida, hemp sesbania and redweed. In most instances, differences in weed height and density did not change when preemergence herbicide rates were reduced from the full to half rates, and none of the herbicides provided complete weed control. The number of days after planting for weeds to reach the treatment stage for Roundup when no preemergence herbicide was used was 17, 21 and 25 for the three years. The rapid growth rate of weeds in the first year (17 days) was probably related to the late planting date in early June.

In most cases, the first weeds reaching the 4-inch treatment size were barnyardgrass or hemp sesbania, but this depended on the preemergence herbicide used. The first year, all soil-applied herbicide treatments reduced growth rate of weeds, providing an extra three to five days before the first Roundup application was needed when compared with no preemergence herbicide. For the second year, the full rate of Canopy extended the application time for Roundup by six days. The full rates of Canopy XL and Canopy were the only treatments to extend the application time the third year, providing an additional seven days.

There were no differences in control of barnyardgrass, prickly sida or redweed among the herbicide treatments evaluated 14 days after Roundup was applied. These weeds were controlled 93 percent to 100 percent over the three years, showing that use of preemergence herbicide was not beneficial. When only Roundup was applied, ivyleaf moringglory was controlled 77 percent, but control was as high as 86 percent to 93 percent when Roundup followed the high rate of Detail and both rates of Canopy XL and Canopy. When compared with Roundup alone, hemp sesbania control was increased when Roundup followed the high rate of Detail (81 percent) or Canopy XL (83 percent) and both rates of Canopy (85 percent and 95 percent). Neither half nor full rates of preemergence herbicides followed by Roundup could control hemp sesbania completely, and an application of Blazer was needed each year.

Soybean yield was equivalent for all herbicide treatments and averaged 37.8 bushels per acre, further showing that a total postemergence program using Roundup was as effective as when preemergence herbicides at either half or full rates were followed by Roundup.

Results show that weeds emerging with soybeans do not affect crop yield negatively when the initial application of Roundup is made within three weeks after weed emergence. The extension in the time period to make an initial Roundup application when weed growth is delayed with some preemergence herbicides (three to seven days depending on year) may be extremely important in diversified operations where time constraints exist.

Acknowledgment
The Louisiana Soybean and Grain Research and Promotion Board provided funds to support this research.