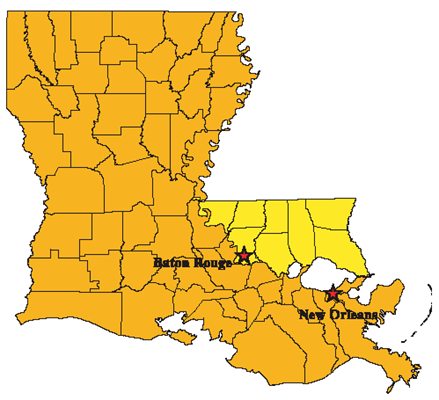 Rural land value contours were estimated to show the combined effects of location and economic development. In general, the metropolitan areas of Baton Rouge and New Orleans have a dramatic effect on rural land values. 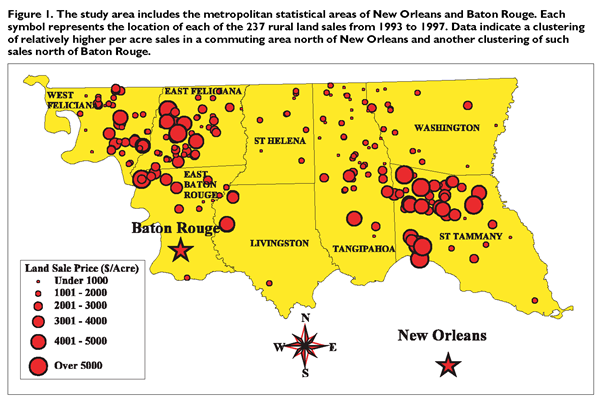 Figure 1. The study area includes the metropolitan statistical areas of New Orleans and Baton Rouge. Each symbol represents the location of each of the 237 rural land sales from 1993 to 1997. Data indicate a clustering of relatively higher per acre sales in a commuting area north of New Orleans and another clustering of such sales north of Baton Rouge. 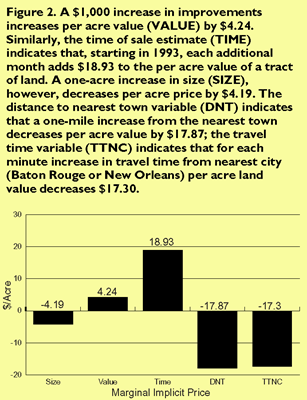 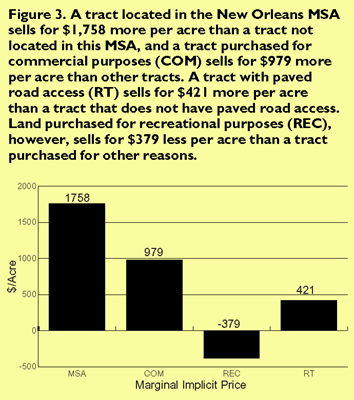 A growing population with added economic activity in urban areas influences rural land markets at the rural-urban fringe. With more rural land acres being converted at the urban fringe, buyers, sellers, planners, appraisers, tax assessors, lenders and others are expected to have an increasing need for information about the effect of location and economic development on rural land values.

Research results from a spatial econometric study of the rural land market in southeast Louisiana provide an indication of the factors that influence rural land values in this area and the magnitude of these factors in this market. Factors studied include site characteristics, tract location and economic development activity.

Site characteristics hypothesized to influence per acre rural land values in this analysis are size of tract and the dollar value of improvements. The size of tract is expected to have a negative relationship with per acre selling price because fewer buyers compete in markets for larger tracts and many buyers compete in markets for smaller tracts. Value of improvements is expected to have a positive influence on per acre values.

Three hypothesized relationships are included as measures of location and economic development. These include travel time to nearest city, distance to nearest town and paved access road. The travel time and distance variables are expected to have a negative influence on per acre rural land values. Location theory generally suggests an inverse relationship between distance to markets and per acre selling prices. Paved road access is expected to reflect development potential and accessibility and have a positive influence on per land values.

Data for this study are based on rural land market sales from southeast Louisiana as determined through a mail survey. The rural land market survey was mailed to state certified appraisers, officers in commercial banks, Farm Service Agency personnel, Federal Land Bank personnel, Production Credit Association personnel, members of the Louisiana Chapter of the American Society of Farm Managers and Rural Appraisers, and members of the Louisiana Realtors Land Institute. Each respondent was asked to provide rural land sales of 10 acres or more in size including attachments to the surface such as buildings and other improvements and sales outside the boundaries of towns and cities.

Three continuous variables were estimated to have a negative influence on per acre values. A one-acre increase in size decreases per acre price by $4.19. The distance to nearest town variable indicates that a one-mile increase from the nearest town decreases per acre value by $17.87, while the travel time variable indicates that, for each minute increase in travel time from the nearest city (Baton Rouge or New Orleans), per acre land value decreases $17.30.