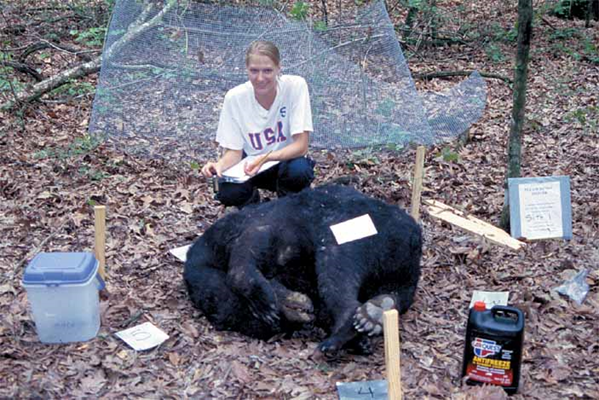 Because the Louisiana black bear is a threatened species, researchers could collect data only from bears found dead, usually because of a highway accident. Erin J. Watson is shown with a Louisiana black bear on Day 2 of the study conducted in the spring of 1999. (Photo by C. Lamar Meek)

Most people are familiar with the use of forensic entomology in the investigation of crimes involving humans. However, another area in which this type of science is valuable is in the investigation of suspicious deaths of animals and suspected cases of animal poaching. The illegal take of wildlife is a serious offense. About 16,000 poaching cases occur annually in Louisiana. Only half of these cases are prosecuted because of limited or no evidence available.

Traditional techniques for establishing time of death of wildlife are limiting. At most, they are effective for only 72 hours postmortem. These methods include measuring the presence of electrical currents in muscle tissue, which is generally not detectable after three hours postmortem. Another method is comparing the rate of decreasing internal temperature to ambient temperature; however, internal body temperature is of no value beyond 48 hours when carcass and ambient temperatures reach equilibrium. A third method involves measuring the degree of rigor mortis, or stiffening of muscle joints. Rigor mortis occurs soon after death in a predictable manner and is later reversed by internal chemical changes. The entire process of stiffening and relaxing of a carcass takes place within the first two days. A fourth method measures the physical changes of the eye, including pupil size and degree of transparency and luminescence, but this is no longer of value by Day 3 because of decomposition or consumption by fly larvae.

The use of insects can further support the estimated postmortem interval established by these methods for the first 72 hours. Insects are, however, the primary means of determining time of death for wildlife recovered three or more days postmortem. To help develop an entomological database applicable to future poaching cases, a cooperative research effort between the LSU AgCenter and the Louisiana Department of Wildlife and Fisheries was established in 1999. The purpose of the research is to document succession patterns and species composition of necrophilous insects (carrion-frequenting insects) associated with the Louisiana black bear, whitetail deer and alligator.

Decomposing remains of humans and wildlife provide a food source for necrophilous insects. The insects of forensic importance are flies, specifically blowflies, and beetles. Adult flies are referred to as the “first wave” of insects because of their ability to locate a fresh corpse within minutes of death and deposit eggs. These eggs and the fly larvae that emerge serve as a starting point for determining the minimal time elapsed since death. Shortly after the colonization of the carcass by fly larvae, the “second wave” of insects arrives. These include predatory and scavenging beetles.

All necrophilous insects recovered from decaying remains display a predictable pattern of association, depending on time elapsed since death, degree of decomposition and seasonal conditions. Entomologists can help establish time of death by combining these observed predictable “waves” with their understanding of development rates and life cycles of carrion-frequenting insects.

Blowfly life cycles have been thoroughly documented by the Medical Entomology Laboratory of the LSU AgCenter and generally take 11 to 12 days for completion (egg, larvae, pupae, adult), except during cool winter conditions. Therefore, postmortem indicators established within the first two weeks of decomposition typically provide precise estimates of time of death for the south-central United States. Insects still provide valuable clues beyond this time period, although the level of confidence declines as decomposition progresses from advanced to putrid and finally to dry remains.

Data were collected for the forensic entomology research conducted by the LSU AgCenter over the course of three seasons – spring and fall of 1999 and winter of 2000. Each seasonal experiment consisted of one Louisiana black bear, two whitetail deer, two alligators and two swine (experimental control). Fresh carcasses were randomly assigned to seven sites approximately 300 yards apart within a forested wildlife preserve in East Baton Rouge Parish.

Because of its status as a threatened species, the Louisiana black bear cannot be terminated for experimental purposes. Deceased bears were donated as they became available, such as being struck by a vehicle. The size and age of bears donated ranged from an 11-year-old, 325-pound male to a 5-year-old, 150-pound male.

Whitetail deer were harvested by wildlife officers and generally weighed 70 to 90 pounds for each study. Juvenile alligators also were donated by the Department of Wildlife and Fisheries and ranged from 3 to 5½ feet in length. The swine carcasses were donated by the LSU AgCenter and weighed between 60 and 100 pounds.

All carcasses were monitored simultaneously for necrophilous insects by three sampling methods: aerial sweep net, pitfall traps for continuous surveillance and manual sampling of the carcass and surrounding soil. Sampling efforts were terminated at varying intervals, depending on the length of time required for each wildlife species to skeletonize. In the spring of 1999, this meant 24 days for the alligator, 68 days for the whitetail deer and 92 days for the black bear.

Results of the three seasonal studies can be broken down into several categories. First, the duration of insect activity associated with a carcass directly corresponded to carcass size. Similarly, the larger the carcass, the longer it took to skeletonize. For example, the 325-pound black bear in the spring series was able to support considerably more blowfly larvae. As a result, larvae were collected from Day 2 until Day 22 postmortem; no larvae were observed at the alligator, pig or deer after Days 9, 10 and 11, respectively.

Second, egg-laying blowflies showed no preferential selection or avoidance of wildlife species, but a delayed presence of eggs was noted on alligators due to limited viable sites for egg deposition. As a rule, female blowflies will first deposit eggs within natural openings and bodily wounds. Alligators were less attractive because they had no external wounds, the anal region is virtually inaccessible, and the eyes, nostrils and jaws were shut tight. Because the duration of rigor mortis varies with temperature, the presence of eggs and young larvae on alligator carrion varied from half a day to a few days later than on all other carcass types.

Third, the abundance of insects associated with carrion later into decomposition varied, depending on the wildlife species. The most obvious example was the lack of scavenging beetles on alligator carrion during advanced decay stages. These scavenging beetles and their larvae feed on dried tissue, including hair and skin. Their scarcity on alligator carrion was probably due to the absence of fur.

Fourth, overall insect diversity and species composition were noticeably less on alligator carrion than bear, deer or swine. Fifth, there was a dramatic delay of all insect development rates and patterns because of extremely low temperatures in the winter of 2000. Finally, indicator blowfly species and overall necrophilous species composition and life stage patterns differed for each season.

Because of LSU AgCenter research, officials with the Department of Wildlife and Fisheries anticipate that law enforcement officers will be able to solve up to 1,000 additional cases per year. Depending on court discretion, convicted poachers of deer or alligator are fined $750 to $1,500 per offense and sentenced up to 30 days in jail. In addition, guilty persons must pay a civil restitution fee for the estimated replacement costs of the wildlife taken. The civil restitution fee for a whitetail deer is $525; the fees for alligators are $35 per foot and $2.21 per pound.

The Department of Wildlife and Fisheries estimates only 300 Louisiana black bears remain, with four to five of them killed illegally each year. Wildlife law enforcement officers have been able to solve only one to two of these poaching cases because the remaining carcasses are either never recovered or have been found three or more days postmortem. Since Louisiana black bears are a threatened species, the combined penalties are considerably higher at $11,000 and up to 120 days in jail. Louisiana collects approximately $350,000 annually in penalties and restitution fees for the successfully prosecuted cases of deer and alligator. Even by a conservative estimate, the incorporation of forensic entomology may result in additional $100,000 in recovered fines and restitution fees for deer and alligator alone.

Preliminary results obtained from this research highlight the differences in succession patterns that must be considered when prosecuting in court. Future research will explore the feasibility of applying forensic entomology to a broader spectrum of wildlife species. This research, in combination with workshops for law enforcement officials, will ensure that the use of rigorous, standardized entomological data will become a routine part of crime scene investigation of humans and wildlife.