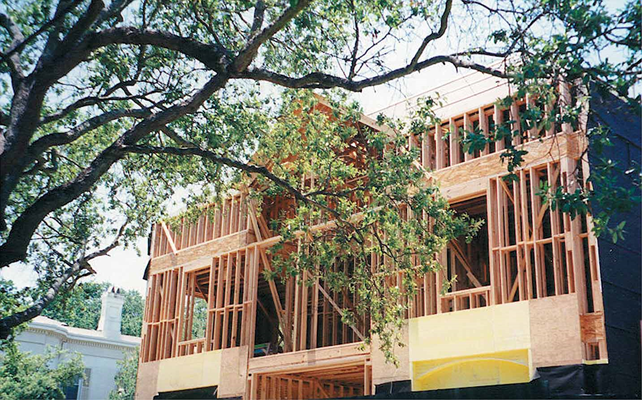 The Louisiana Forest Products Laboratory is testing wood treatments that will protect structural materials from termites. This house in New Orleans is being constructed with borate-treated lumber. Borates have been found to be toxic to termites. (Photo by W. Ramsay Smith) 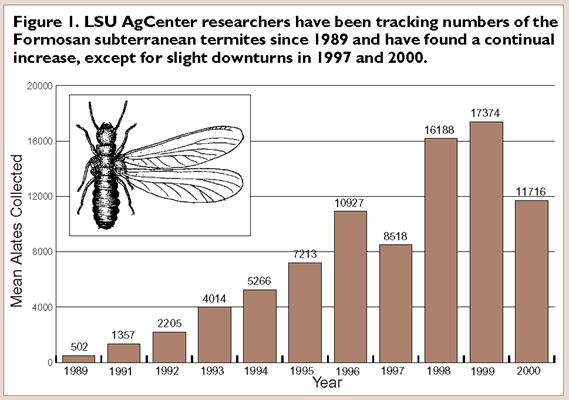 Figure 1. LSU AgCenter researchers have been tracking numbers of the Formosan subterranean termites since 1989 and have found a continual increase, except for slight downturns in 1997 and 2000. 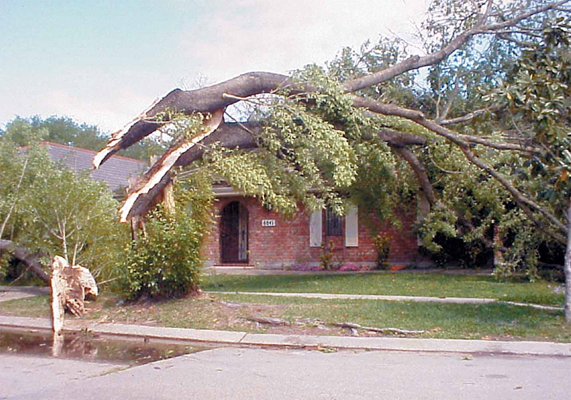 This tree was so weakened from termite infestation that high winds blew it onto this house in New Orleans. (Photo by Gregg Henderson)

Big numbers cause big problems. The Formosan subterranean termite causes severe economic loss, including an estimated $300 million of property damage per year in New Orleans alone. For example, termite damage caused one house to split apart and required that several other houses and an apartment complex be demolished. People are defaulting on mortgages and cannot get loans to repair their damaged homes.

The Formosan subterranean termite is aggressive in its pursuit of water. It finds sources of water other than ground moisture, such as leaking pipes, roof leaks and blocked gutters. It builds nests above ground in walls, which can store water for future use. This frees the termites from the continuous ground contact that subterranean termites require. Formosan subterranean termites can eat the untreated centers of creosote-treated railroad ties, pilings and utility poles. They will go through thin sheets of soft metal, mortar, gypsum board, PVC pipe, electric power lines and telecommunications lines to reach food and moisture sources. They can also go through 1/16-inch cracks in concrete, entering homes without requiring typical mud tubes. Once in the interior they can keep out of sight while doing major damage to interior walls.

LSU AgCenter researchers have been tracking numbers of the Formosan subterranean termites since 1989 and have found a continual increase, except for slight downturns in 1997 and 2000 (Figure 1).

Unlike our native subterranean termites, the Formosan subterranean termite infests the wood of live trees. This not only provides them a food source but also serves as a reservoir for infestations into nearby structures. Weakened trees are susceptible to being blown over in high winds.

The LSU AgCenter is taking a three-pronged approach to find solutions to the Formosan subterranean termite problem. One is entomological and involves study of the insect and ways to control its numbers. Another is a material properties approach to determine the best way to protect existing and future structures from attack. The third is education.

LSU AgCenter entomologists started studying the insect when it was first identified in Louisiana in 1966. Termite bait research started at the LSU AgCenter in 1991. This work resulted in development of bait systems now on the market.

Another control method being explored is a plant extract called nootkatone from vetiver grass roots. Nootkatone has been used in the perfume industry and for flavoring in citrus drinks. It has been found to act as a repellent with the Formosan subterranean termite.

In reducing termite populations, research efforts have been focused on targeting termites in living trees. One implementation of this research is a five-year, $5 million treatment project started in New Orleans in the spring of 2000. The project involves treating trees and is directed by the Louisiana Department of Agriculture and Forestry. LSU AgCenter scientists are involved in the evaluation of the project.

Another avenue for reducing the problem is to reduce the spread of this termite. Used railroad ties sold as landscape timbers are common means of transport. As a result of education efforts by LSU AgCenter researchers and collaborators from other institutions, the Railway Tie Association and Norfolk Southern Corporation instituted strict guidelines for movement of railroad ties as of December 11, 2000. In addition, they have organized an industry effort to determine the scope of the problem and work toward the necessary solutions to end the spread of Formosan subterranean termites through this route.

The Louisiana Forest Products Laboratory is addressing the problem by working to develop and test wood treatments that will protect structural materials from attack. There are chemicals and treated wood on the market that resist termite attack. Most chemicals, however, are primarily used on solid wood components such as sill plates, studs and plywood. Few are suitable for engineered wood products such as oriented strandboard or wood-based I-beams. These chemicals use water to transport them into the wood, which affects swelling properties and hence dimensional change and strength when applied after manufacturing. They can also affect the gluing characteristics of wood particles before manufacturing because of resin-additive interactions. For a treatment to work, it has to be effective against the termite without compromising the product properties during service. Research, therefore, is being carried out to determine and enhance physical properties and efficacy of various treatments for engineered wood products.

Adequate protection for residential structures requires education of the public. An integrated program includes using the proper techniques and understanding the interactions between planning, designing, site preparation, building and long-term maintenance during the life of a structure. The LSU AgCenter has educational programs for homebuilders, homeowners and pest control operators.

In an effort to help pest control operators address site preparation and pest management techniques, the LSU AgCenter participates with the Lois Caffey Termite Training Center in a two-day termite training school twice a year for them. Approximately 150 operators are trained per year. In addition, a six-day course is offered at the LSU Summer Urban Pest Management Institute that includes educational programs on integrated pest management of most types of urban pests. This institute produces about 30 graduates per summer.

The Formosan subterranean termite is here to stay. It is well established in the southern United States and is being spread primarily by humans. Its ability to infest living trees will help assure its continued existence. The only hope of management and control is through educational and research efforts, such as those being conducted by LSU AgCenter scientists in cooperation with other agencies and institutions, including the Louisiana Department of Agriculture and Forestry.