Resistance of Louisiana Sugarcane to Deterioration from Freezing Temperatures 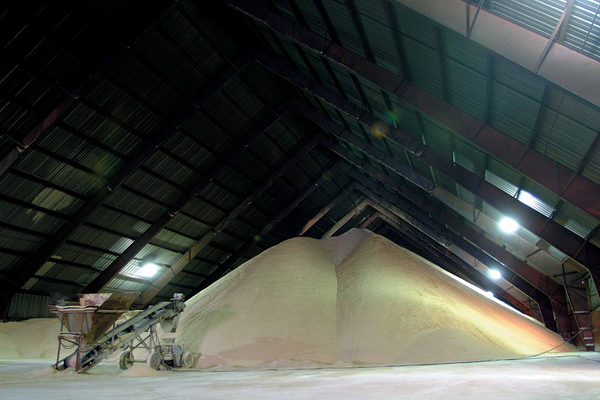 Raw sugar is stored in warehouses before being transported to refineries. This is the St. James Sugar Cooperative in St. James, La., one of 17 mills in the state. Louisiana has two refineries—one in Gramercy and another in Chalmette. (Photo by John Wozniak)

Exposure of sugarcane to damaging frosts occurs in about a fourth of the sugarcane-producing countries but is most frequent in the United States, particularly in Louisiana. Here, winter freezes have forced the industry to adapt to a short growing season (about nine months) and a short milling season (about three months), although in recent years the milling season has been extended to about four months. Growers and processors must work together to ensure that most of the harvest is completed before January, usually the coldest month. With record crops harvested during the past three years, many growers and processors have had to extend the harvest until mid January, thus increasing the chances of freeze damage.

The effects of low temperatures have been extensively reported. Temperatures between 32 degrees F and 25 degrees F do little more than kill terminal buds and cause leaves to brown. Although no stalk tissue is usually damaged and no souring (deterioration) takes place, dead leaves cannot produce sugar, and the stalk sucrose content remains stable until new leaves are produced or a more severe freeze occurs. In some cases, sucrose content of the juice following freezing conditions of this magnitude actually increases slightly one to two weeks after the freeze, in part, because of dehydration of the stalk. Temperatures between 25 degrees F and 22 degrees F may kill leaves and both terminal and lateral buds; varying amounts of internal stalk tissue may be damaged. Temperatures below 22 degrees F kill all above-ground parts of commercial varieties.

Following freeze injury, dead and dying cells are vulnerable to invasion by the bacterium, Leuconostoc mesenteroides.This bacterium, which is found everywhere in cane fields, consumes sucrose and produces dextran as a byproduct. The bacterium gains entry into the storage tissue through dead lateral buds and freeze cracks. When the frozen tissue thaws, cane juice may leak out at these points. It has been found that the concentration of dextran in the juice is one of the more sensitive criteria in determining the resistance of varieties to deterioration following a freeze.

In many cases, varietal differences in the amount of frozen tissue are a factor in determining the rate of deterioration following a freeze. Cutting off cane tops with the harvester removes the frozen tissue and consequently improves quality because high acidity and dextran are generally not found in the undamaged part of the stalk. Further studies suggest that the resistance of tissue to freezing is not the sole mechanism involved since strong varietal differences are apparent in completely frozen cane. It appears that when all the tissue of all varieties is completely frozen by subfreezing temperatures, there may be varietal differences in keeping quality for as long as two or more weeks after the freeze. Accordingly, this suggests two mechanisms at work—susceptibility of tissue to freezing and susceptibility to deterioration once the tissue is frozen.

The first freeze of consequence occurred on Dec. 20, 2000, when the minimum temperature recorded in the field at the farm was 24 degrees F. Freezing temperatures occurred again on Dec. 21, Dec. 30 through Jan. 5, 2001, and Jan. 9 and 10, 2001. The lowest temperature of 22 degrees F was recorded on Jan. 4. Freezing conditions prevailed for 8 to 15 hours during each freeze. After the Jan. 4 freeze, no sound tissue was observed in any cane, and freeze cracks were abundant in all varieties. Cane tops began to droop within days, and the overall condition of the cane deteriorated to the extent that the stalks lost all integrity and fell over onto the ground.

Little or no deterioration was evident for all six varieties through 14 days after the initial freeze of Dec. 20. Samples taken 22 days after the initial freeze (eight days after the freeze of Jan. 4) showed significant harmful changes in juice quality for all six criteria (sucrose content, purity, sugar yield, pH, acidity and dextran concentration) investigated. By the 30th day all varieties had deteriorated to the point where they were unacceptable for processing into sugar. Overall, the ranking of varieties for stalk cold tolerance, from best to worse, when considering all criteria studied was as follows: CP 70-321, LHo 83-153, LCP 85-384, HoCP 85-845, HoCP 91-555 and CP 79-318. Accordingly, the classification of resistance to deterioration for these varieties following the freezes that occurred during the 2000-2001 harvest is as follows: Very Good – CP 70-321; Good - LHo 83-153; Good to Moderate – LCP 85-384; Moderate – HoCP 85-845; Moderate to Poor – HoCP 91-555; and Poor – CP 79-318. These results compare favorably with data obtained from previous years in which freezing conditions occurred.

(This article appeared in the fall 2001 edition of Louisiana Agriculture.)